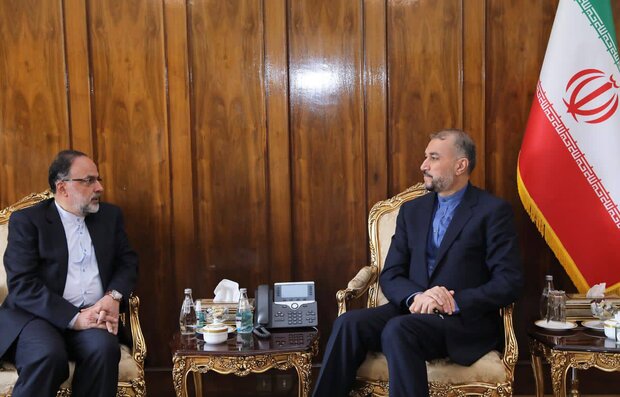 In a meeting with the Iranian envoy to Sweden, the Iranian Foreign Minister made important recommendations regarding the case of imprisonment of Iranian citizen Hamid Nouri in this country.

During this meeting, Amir-Abdollahian provided the necessary guidelines regarding the future plans for relations between the Islamic Republic of Iran and Sweden.

The two sides discussed the case of the Iranian citizen, Hamid Nouri who was illegally arrested by Swedish police in November 2019.

Emphasizing that the Stockholm court has not the eligibility to deal with such alleged crimes, the Iranian Foreign Minister made important recommendations regarding the imprisonment of Hamid Nouri in this country.

On July 12, the Secretary of Iran High Council for Human Rights urged the UN to hold the Swedish government accountable for the illegal detention and trial of Nouri, while calling for his immediate release.

Also, Iranian Foreign Minister Hossein Amir-Abdollahian, in a phone call with his Swedish counterpart Ann Linde, had stressed the immediate release of Nouri.

Nouri was arrested upon arrival at the Stockholm Airport in November 2019 and was immediately imprisoned on bogus charges.

He has been held in solitary confinement for over two years. Swedish prosecutors have requested the maximum penalty of life imprisonment for the former Iranian judiciary official, falsely accusing him of prisoner abuse in the 1980s.

The charges against Nouri stem from accusations leveled against him by members of the terrorist Mujahedin-e-Khalq Organization (MKO).