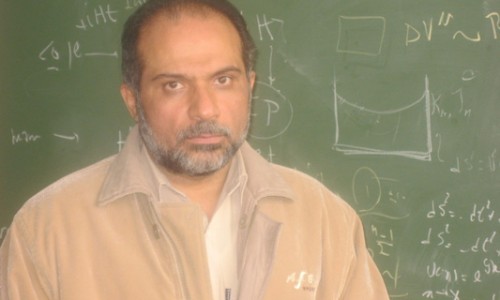 Iranian nuclear scientists have constantly fallen victims to the Israeli regime's state terrorism in recent years; while the international community has kept silent and Iran has made it clear that the crime wouldn't remain unpunished.

The Israeli regime's hostility towards Iran entered a new phase in 2010, when the Zionist regime assassinated two Iranian nuclear scientists in the year.

It was an early morning in January 2010, when the 50-year-old physics professor encountered an explosion caused by a remote explosive device while he was leaving his house.

Dr. Masoud Alimohammadi who taught physics in University of Tehran and had published tens of ISI-level scientific articles was martyred by the explosion.

He had expertise in elementary particle, high energy physics and cosmology and was a fellow in Institute for Research in Fundamental Sciences.

The crime was a beginning for the Israeli regime's state terrorism in connection with Iran's nuclear program and was followed by another assassination the same year.

In November 2010, Majid Shahriari, a PhD holder in nuclear engineering, who has contributed to containing the computer virus Stuxnet that targeted Iran's nuclear facilities, was martyred by an electromagnetic bomb attached to his car.

Dariush Rezaeinejad, an electrical engineering PhD student, who had no connection with Iran's nuclear program was shot in July 2011, while he was entering his house along with his wife and daughter.

Iranian authorities said at the time that Rezaeinejad had no contribution to the nuclear program, but Western media baselessly claimed that he was designing an electrical switch used in nuclear facilities.

Mostafa Ahmadi Roshan was another Iranian nuclear scientist to be targeted by the terrorist Israeli regime. He was the deputy of commerce in Iran's Natanz nuclear power plant.

A motorcyclist attached an electromagnetic bomb to the car carrying him and the explosion led to the death of Ahamdi Roshan and his driver Reza Qashqaeifard.

The latest case of Israeli state terrorism was carried out in late 2020. Mohsen Fakhrizadeh, the head of the Research and Innovation Organization of Ministry of Defense, was assassinated in November that year in a terrorist operation carried out by the Israeli regime.

The Islamic Republic of Iran has always criticized the international community for its deafening silence on the assassination of Iranian nuclear scientists.

In September last year, Director General of the Peace and International Security Department at Iranian Foreign Ministry Reza Najafi called on the UN to take firm position with regard to assassinating nuclear scientists.

Iran has also made it clear that the assassinations wouldn't go unpunished, as Iranian Judiciary Deputy Chief for International Affairs Kazem Gharibabadi said on Wednesday that the criminal act of assassinating nuclear scientists is obvious breaching of human rights.

“[Ahmadi Roshan] was an untiring, pious scientist and the criminal act of assassinating the nuclear scientists, which is an obvious breaching of the human rights, will no go unpunished," he said in a tweet.