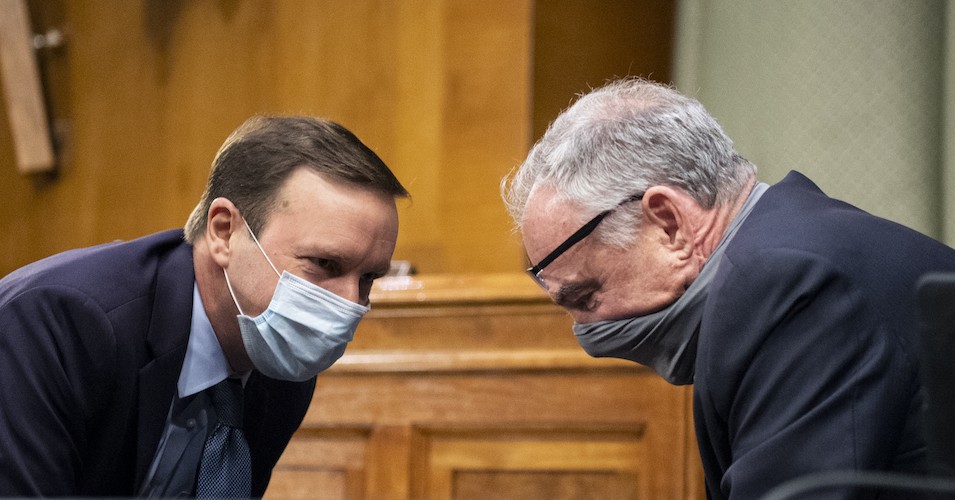 Two Democratic senators said Friday that the Biden administration must provide Congress with its legal justification for the retaliatory airstrikes it carried out Thursday in Syria allegedly targeting a site used by two Iranian-backed militia groups.

"The American people deserve to hear the administration's rationale for these strikes and its legal justification for acting without coming to Congress," Sen. Tim Kaine (D-Va.)—who last year put forth an ultimately vetoed War Powers resolution last year to prevent conflict in Iran without congressional approval—said in a statement.

"Offensive military action without congressional approval is not constitutional absent extraordinary circumstances. Congress must be fully briefed on this matter expeditiously," said Kaine.

While calling "strikes by Iranian-backed militias on bases in Iraq hosting U.S. troops... unacceptable," Murphy said that "retaliatory strikes, not necessary to prevent an imminent threat, must fall within the definition of an existing congressional authorization of military force."

The Connecticut Democrat added that "Congress should hold this administration to the same standard it did prior administrations, and require clear legal justifications for military action, especially inside theaters like Syria, where Congress has not explicitly authorized any American military action."

In the House, Rep. Ro Khanna (D-Calif.)—who previously introduced legislation to prevent the Trump administration from rushing to war with Iran without congressional approval—framed the airstrikes within the context of the Democratic Party's political messaging.

"We ran on ending wars, not escalating conflicts in the Middle East," Khanna tweeted Friday.

"Our foreign policy needs to be rooted in diplomacy and the rule of law," he continued, "not retaliatory air strikes without Congressional authorization."

In an earlier tweet on Friday, Khanna said, "We need to work to extricate from the Middle East, not escalate."