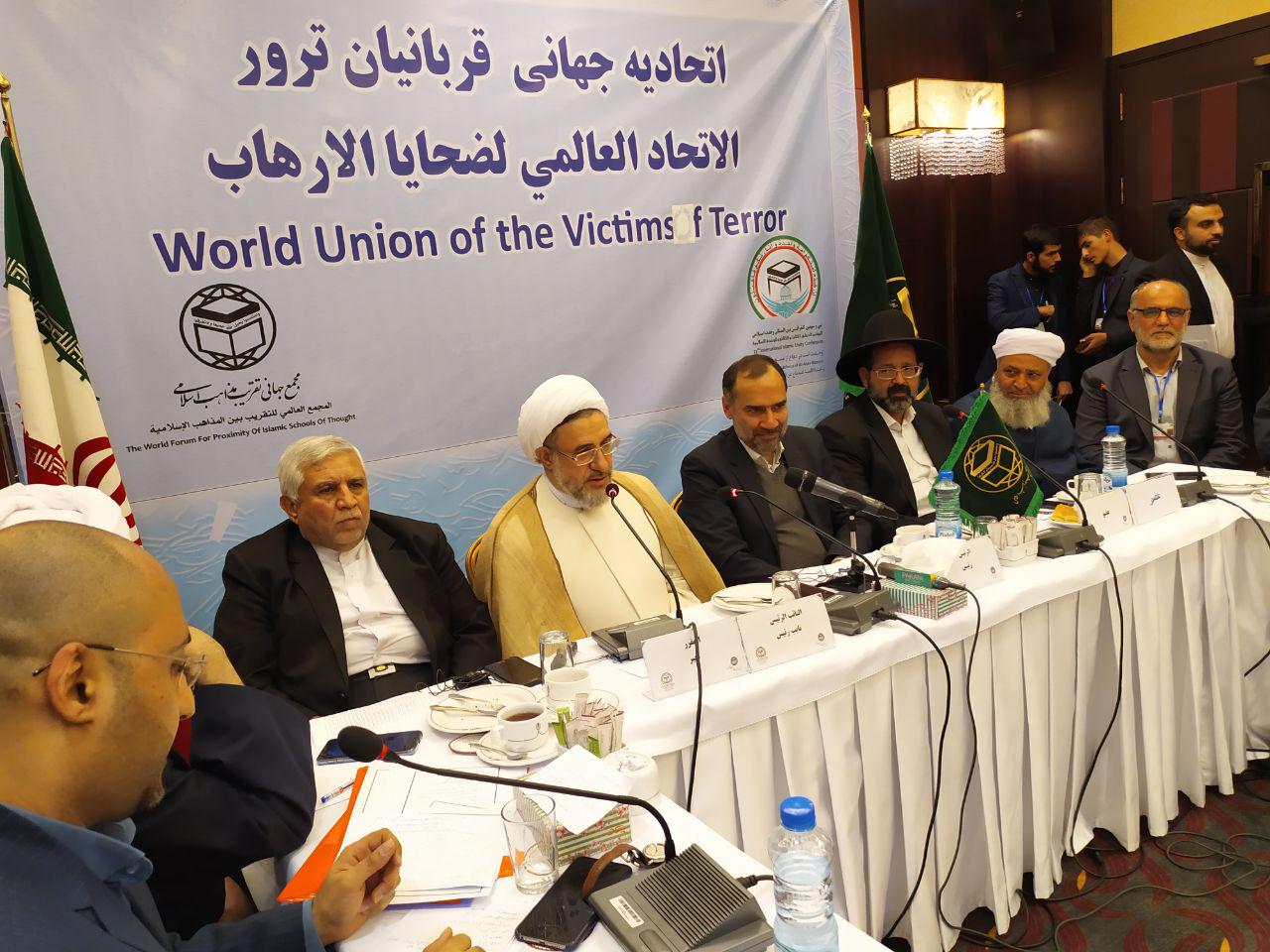 Habilian Association Chaired the Commission of the World Union of Victims of Terror.
According to Habilian Website, a group of scholars and intellectuals from the Islamic world and the Abrahamic religions along with families of martyrs of terror expressed views and exchanges ideas at a meeting named “Palestine, the Al-Aqsa Mosque, and the State Terrorism of the Zionist Regime and America.”
At the beginning of this meeting, which was held at the sidelines of the 34th World Summit on the Proximity of Islamic Schools of Thought, Habilian Association Secretary-General Seyyed Mohammad Javad Hasheminejad gave a lecture. Referring to the assassination of senior Iranian officials including President and Prime Minister, Head of Judiciary and a number of ministers and parliamentarians during few months, Hasheminejad said that Iran is a big victim of terrorism in the world. He added that the perpetrators of these attacks now have official offices in Europe and the United States.
Citing the Hillary Clinton’s confession to the role of US government in creation of ISIS, Habilian Association Secretary-General introduced the USA and the Zionist Regime as the main sources of terrorism and crime in the region.
Mentioning Habilian Association’s decision to launch a public petition to extradite and prosecute the perpetrators of terrorist attacks in Iran, Hasheminejad emphasized on the necessity to pursue the rights of victims of terror in the Islamic world.
In the continuation of this meeting, the International Affairs Deputy of the Iranian Supreme Leader's office, Dr. Pakaein, while Congratulating the birthday of the Prophet Mohammad (pbuh), said that this year's Islamic Unity Conference took place in a state where the Zionist Regime has killed 34 people in raids on Gaza. Pakaein considered the recent acceptance of ceasefire by Israel as a victory for the axis of resistance and reiterated that the Islamic world recognizes the Zionist Regime as the mother of all terrorists.
Referring to some examples of Zionist terrorism, including assassination of Palestinian authorities like Sheikh Ahmad Yasin, the spiritual leader of Hamas, as well as the Jewish people who have been assassinated by the Zionist Regime, the International Affairs Deputy at the office of Iranian Supreme Leader said that this why we say that Israel is the source of terrorism.
At the end of the meeting, the final statement of the World Union of Victims of Terror was read.
Other speakers of the meeting were included: Rabbi Dr. Hamami Lalezar, the current religious leader of Iranian Jews; Heydar Banaei, a victim of assassination attempt; Somayeh Tara, daughter of a martyr of assassination; Molavi Tavakkoli, Taibad’s Friday Imam; Seyed Mohammad Hadi Hadi, Head of the Holy Prophet Foundation of Afghanistan; Molavi Habibollah Hesam, Head of the Afghan Government Council; and daughter of martyr Abbas Goodarzi.