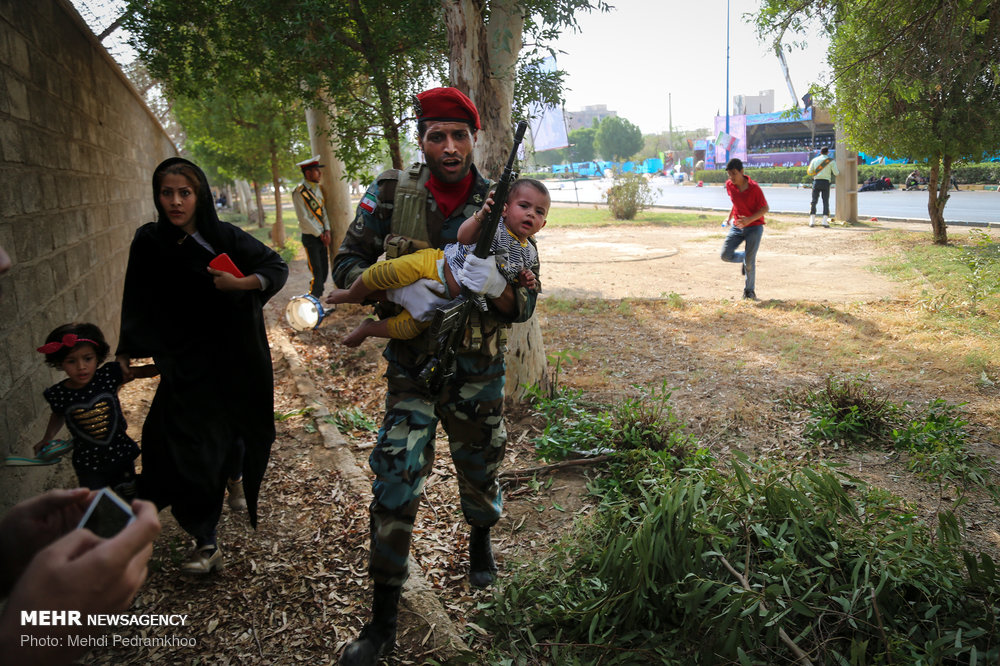 Ten people were killed and at least 20 others injured in a terrorist attack on a military parade in Iran’s southern city of Ahvaz on Saturday, a provincial governor said.
Gunmen opened fire on people from behind a viewing stand at Qods Boulevard of Ahvaz during the morning parade held to mark the former Iraqi dictator Saddam Hussein's invasion of Iran in the 1980s.

"Individuals disguised in the Islamic Revolution Guards Corps and Basij uniforms fired at officials and people from behind the stand, leaving a number of innocent people including women and children martyred or injured," Governor of Khuzestan Province Gholamreza Shariati said.

"So far, the martyrdom of 10 people has been verified in this subversive and blind attack," Deputy Governor of Khuzestan Province Ali Hossein Hosseinzadeh told the official IRNA news agency.

"More than 20 people were injured in the incident, and it is possible that the number of the martyrs will rise due to the severity of injuries," he added.
The attackers began firing at spectators from a park as the parade got underway, trying to force their way into the stand but were confronted by security forces.
"Despite the intensity of the attack on the stand of the officials, none of them was hurt thanks to the rapid reaction of the security forces, Shariati said.
The terrorist team behind the attack was dismantled, he said, adding the situation is now under the control of security forces and police and calm has returned to the region.

"According to preliminary reports, four attackers were involved, two of whom were killed and two arrested, one of them injured," Shariati said.
The Islamic Revolution Guards Corps (IRGC) spokesman Ramezan Sharif said the attackers were affiliated to a terrorist group supported by Saudi Arabia.
"The individuals who fired at the people and the armed forces during the parade are connected to the al-Ahvaziya group which is fed by Saudi Arabia," he said.
Sharif said the shooting is not unprecedented and the group which is also supported by the UK has attacked convoys of those visiting the former frontlines in Saddam's war on Iran in recent years.

The Fars news agency said citizens watching the parade first thought that the shooting was inadvertent. "After several people were injured, they realized it is a terrorist attack," it said.
Sharif said people had been invited to the ceremony and the terrorists targeted both the people and the armed forces in the attack. "The attack aimed to overshadow the magnificence of the parade by the armed forces," he said.

Similar parades were held in other cities across Iran, including Tehran where President Hassan Rouhani said the US administration will suffer the same fate as Saddam.
"These blind and subversive acts will not have any effect on the resolve and will of the people and their spirit of resistance, but will unite all the people and authorities in confronting the conspiracies of the enemies," Hosseinzadeh said.
The attack comes after a US-backed campaign to stir up unrest in Iranian cities fell flat. The effort, known as the Hot Summer Project, sought to whip up public anger over water and electricity shortages in the face of a protracted drought.