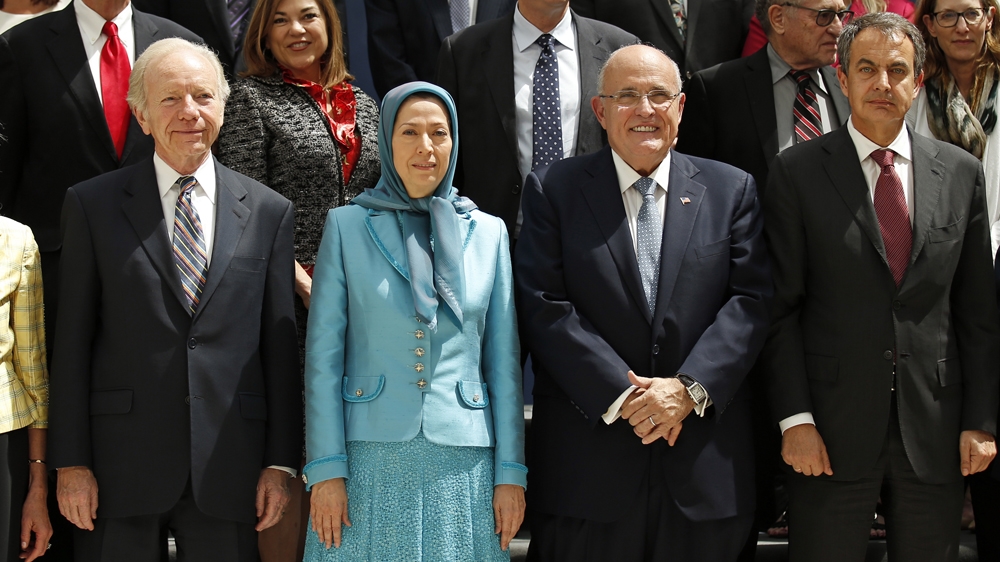 The ex-New York mayor and Trump attorney has long been a supporter of the MEK. But the State Department cautions that Giuliani ‘does not speak for the U.S. government.’

President Trump’s personal lawyer on Saturday will speak alongside the leader of an Iranian opposition group that was designated as a terrorist organization and has often described been as cult-like. It’s the latest signal of the Trump administration’s coalescing hard-line stance against Iran.

Rudy Giuliani is scheduled to speak at the Sheraton in Times Square on Saturday to a gathering convened by the Organization of Iranian-American Communities, an anti-regime group he’s addressed before. Also slated to speak is the co-leader of the Mujahideen-e-Khalq (MEK), Maryam Rajavi, who will address the attendees remotely, according to a representative for the event.

But the Trump administration is already disavowing any implication that Giuliani’s appearance has anything to do with its Iran policies. “Rudy Giuliani does not speak for the U.S. government on foreign policy,” a State Department spokesperson told The Daily Beast.

“Rudy Giuliani has been shilling for the MEK for so long that he is clearly banking on everyone forgetting that the group was listed as a Foreign Terrorist Organization, has American blood on its hands and has never owned up to its deeds,” said Daniel Benjamin, the State Department’s counter-terrorism coordinator in the Obama administration who now directs Dartmouth College’s John Sloan Dickey Center for International Understanding. “Giuliani’s buckraking has been scandalous all along, but it is worse when he does this while acting as the president’s lawyer.”

Giuliani confirmed to The Daily Beast that his “firm” will be paid for the speech, but declined to reveal how much, saying it was “confidential, unless they want to disclose the details.” Majid Sadeghpour, a spokesman for the Organization of Iranian-American Communities, said “it is not our policy to discuss any kind of arrangements regarding the speakers. (He also said the group has no “formal relationship” with the MEK or a related group, the National Council of Resistance of Iran.)

“Our relationship goes back approximately 10 years,” Giuliani said, adding that he was invited to speak by “a client of my firm.” Giuliani did not directly respond when asked if he ran his speech by the administration, saying in a text message: “[T]hey are my thoughts as were the over 1,000 speeches I’ve given in the last 17 years and of course before.”

The OIAC conference is pegged to a forthcoming United Nations Security Council session, chaired by Trump and scheduled for September 26, ostensibly about nonproliferation but also about Iran. Trump will discuss “Iran’s violations of international law and the general instability Iran sows throughout the entire Middle East region,” U.S. ambassador to the United Nations Nikki Haley said earlier this month.

And on its agenda is the prospect for overthrowing the Tehran regime. “The summit will focus on the organized opposition as the alternative to Iran’s ruling theocracy,” an invitation reads, “as well as the need for a decisive Iran policy to deal with the regime’s suppression of its own citizens and its export of terrorism.”

From 1997 to 2012, the MEK was on the State Department’s list of terrorist groups. The exile organization, implacably opposed to the Iranian theocracy after supporting the 1979 revolution, was a terrorist organization before the mullahs’ takeover. The MEK even killed American military personnel in Iran. It became a catspaw of Saddam Hussein’s during the 1980s, when it attacked regime targets, killed Iranian civilians. And the group has a history of behaving like an abusive cult in its treatment of its members, according to observers like Benjamin.

A 2003 New York Times Magazine story by Elizabeth Rubin, “The Cult of Rajavi,” quoted a former MEK member alleging: “Every morning and night, the kids, beginning as young as 1 and 2, had to stand before a poster of Massoud and Maryam, salute them and shout praises to them.” A 2009 Rand Corporation monograph described the MEK’s “near-religious devotion to the Rajavis (Massoud and his wife, Maryam), public self-deprecation sessions, mandatory divorce, celibacy, enforced separation from family and friends, and gender segregation.”

Yet the U.S. occupation of Iraq treated MEK members there as protected persons beginning in 2003, “which has left the United States open to charges of hypocrisy in the war on terrorism,” Rand observed. Rand’s monograph, penned in 2009, raised alarm about what was then a U.S.-protected MEK site called Camp Ashraf. It said that residents of the camp included “a substantial number of these MEK members [who] were lured to Iraq under false pretenses or did not have a clear understanding of the group’s goals and methods of operation – particularly with respect to its cult behavior—and many have been forced to remain against their will.”

None of that has hobbled the MEK’s outsized political influence in the United States, where it leverages its hatred of the Iranian regime for an enemy-of-my-enemy strategy. Rand called the group “skilled manipulators of public opinion” who are “adept at crafting and promoting its image as a democratic organization that seeks to bring down Iranian tyrants, both secular and religious.”

In 2012, an MEK lobbying effort prevailed on Secretary of State Hillary Clinton to remove the group from the State Department’s list of terrorist groups. The MEK has long seen the wisdom of cultivating American political figures across the spectrum, including Democratic ex-governors Howard Dean and Ed Rendell; #resistance hero Michael Hayden, who used to direct the CIA and the NSA; Barack Obama’s former National Security Advisor Jim Jones; and ex-Joint Chiefs of Staff chairmen Hugh Shelton and Pete Pace. On Saturday, Jones will join Giuliani at the forum.

Giuliani has for years backed the MEK, appeared with Maryam Rajavi and taken her group’s money. And he’s spoken to the Organization of Iranian-American Communities before while serving as Trump’s attorney. The last time, in May, Giuliani claimed that Trump is “as committed to regime change as we are,” and pantomimed ripping up the Iran nuclear deal that the Trump administration has abandoned. He also spoke to an MEK gathering in Paris, where Rajavi is headquartered, in June.

Neither Giuliani nor his old law firm, Greenberg Traurig, appear in Justice Department records for foreign lobbying on behalf of the MEK or its known associates. But Giuliani has acknowledged that he took money for his May speech to the Organization of Iranian-American Communities, though he told the Washington Post that he doesn’t discuss his foreign clients with Trump.

Giuliani’s Saturday speech comes amidst rising hostility to Iran and frequent speculation about a confrontation. In July, Trump tweeted at his Iranian counterpart: “NEVER, EVER THREATEN THE UNITED STATES AGAIN OR YOU WILL SUFFER CONSEQUENCES THE LIKES OF WHICH FEW THROUGHOUT HISTORY HAVE EVER SUFFERED BEFORE.” Last week, the administration showed signs of putting that threat into practice. It threatened reprisal for any Iranian-aligned forces that kill or injure U.S. personnel in Iraq. Shortly afterward, the secretaries of State and Defense stuck by its Saudi and Emirati allies over their brutal, U.S.-backed war in Yemen, a proxy fight against an Iranian-tied group. And James Jeffrey, the State Department special envoy for Syria, said the U.S. military mission in Syria has expanded into ensuring what the Post called an “Iranian departure.”

Giuliani’s “support for the MEK, as well as John Bolton’s longtime backing of the group,  is strengthening the impression here and in Iran that the administration supports a policy of regime change,” Benjamin warned. “The risks and costs of such a policy would be enormous, and it’s a pretty good way to guarantee that Tehran will see building nuclear weapon as being in its interest.”