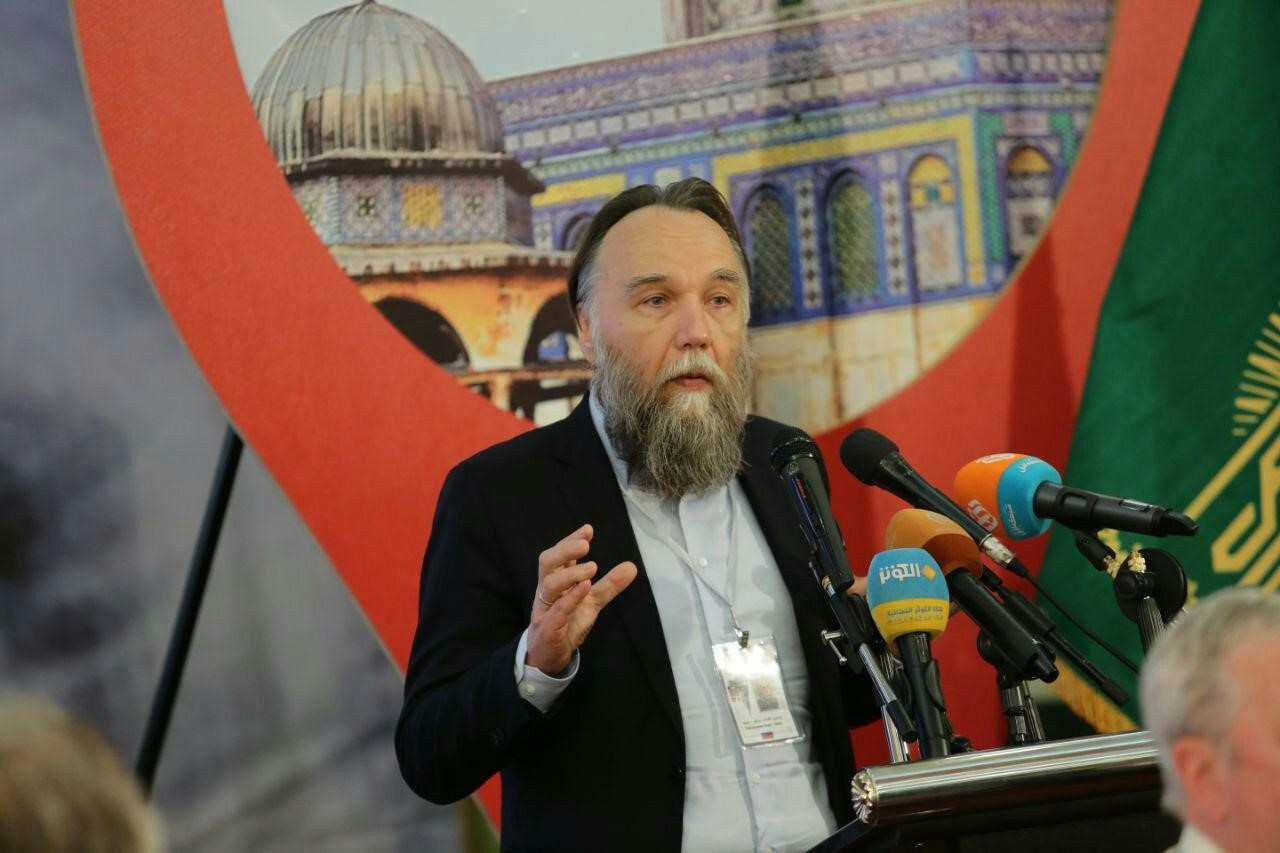 Aleksandr Dugin is a Russian philosopher, political analyst, and strategist and leader and founder of the Eurasia Movement. He, who sometimes is introduced as an adviser to Russian President Vladimir Putin [1], has been served as an advisor to State Duma speaker Gennadiy Seleznyov [2] and key member of the ruling United Russia party Sergei Naryshkin [3]. Dugin traveled to Iran last May to attend the 6th international Conference of New Horizons. What comes below, is the full-text of Habilian Association’s Interview with this known Russian theorist.

Habilian: My first question is about Takfiri terrorist groups in the region, especially the ISIS. We know that many young people from all over the world, from the East and Central Asia to the countries of Eastern Europe and even Western Europe have joined to ISIS, educated people or uneducated people. What are the roots of these joining?
Dugin: First of all, I think it is a multi-level phenomenon. First, there is a sincere feeling among Muslims that they cannot tolerate oppression, absence of justice, western hegemony, and violation of the values. It is a legitimate revolt against Modernity and Western profane culture and is a great motivation. Second, there is a political and ideological manipulation because this very legitimate feeling could be expressed in different ways. It could turn into traditional Islam, could turn into a Shia revolution, and could turn into Sufism. Because traditional Sufism or Sufi path have also been very anti-western, very spiritual, and very anti-modern in its roots because it is based on secret spiritual phenomenon and experience. But this movement is biased and instrumentalized by some special sects in Islam such as Takfiri sects, Salafi sects, and Wahhabi sects. They try to put these young Muslims, who fight for justice and try to find real or integral religion, against their brothers in Islam and Christianity. So, they use the legitimate feeling of seeking the integral Islam, awaked in the heart of young Muslims, in order to oppose them to their brothers in Islam and Christianity. So, that is manipulation. Above this level, it is geopolitical manipulation:  I think the majority of people who join ISIS, or become Salafist, by following for example the orders of Saudi teachers and Wahhabi authorities, don’t recognize that behind the Saudi teacher’s teachings there stands a geopolitical order of United States and western globalists, who try to pervert the image of Islam, and try to identify Islam with its radical terrorist version. So this third level by manipulating original awakening of deep Islamic feelings, illegitimate their legitimate fight because it opposes the tradition. The Wahhabi teachers themselves are employed by globalists and centers of power, like CIA, in line with regional geopolitical situation, to pervert image of Islam and to create the reason to attack a country. For example, when Americans accuse someone of being Islamist terrorist, then they could justify their aggression. It is important that these groups never attack real enemies of Islam, such as Israel. Instead, they’re attacking their brothers that are their closest friends in religion; they genocide Christians; they genocide Yazidis, the innocent people who are of different representative of traditional Shia. So, they address their aggression against the wrong goal and never against the real goal. It is a clear explanation of these horrible manipulations. Today many forms of Islam are void: a kind of the fake Islam and this youth who join ISIS try to overthrow this fake Islamic regimes. They demand healthier, sincerer and moral thinking. to say the truth, with the corrupted regimes in Islamic world, It’s not ideal to say, “O, join our society”. So we should propose something instead.

Habilian: So, what is the correct way of dealing with these people?
Dugin: We shouldn’t demonize them; we should save them. We should show them the real enemy because they’re ready to sacrifice their lives in the fight against the real enemy and they show to them the wrong enemy, they manipulate them. So, we shouldn’t ask them to stay calm and be integrated into the society. They need revolution, they need awakening, they need a return to sacred root of Islamic tradition, that is something whole, something integral, that is not only a part. I think we need objective criteria so recognize that which tradition is legitimate, authentic, and sacred, and thus the fight for it is authentic, too. So, it should be open to the others, it should not be sectarian, it should be opposed to appeal for genocide of Christian brothers and their struggle, and should be directed against the real enemy, the anti-spiritual capitalist system, or Dajjal. Its characteristic would be solidarity with all the allies: not only with the same Muslims, but also with Christian allies and with allies from other traditions. In that case, Shia and Sunni will be in one front, and the pro-American sectarian totalitarian extremist form of Islam will be isolated. So, we should not demonize them, we should save them because they think they are fighting for Islam. What we have to do is show them how they should fight for Islam, not in that way, not against Islam, not being instrumentalized or employed as idiots. So, they should be real fighters for the right cause, as they imagine that they are. So, we need to work with them carefully to re-educate them, instead of destroying them. I think it is the main challenge in the eradication of terrorism.

Habilian: How can we eradicate this kind of terrorism?
Dugin: We have to destroy the terrorist number one: American hegemony and western new imperialism and colonialism. We have to destroy global capitalism. That is the terrorist number one and the real origin of terrorism. Then its Salafi, Wahhabi proxy will be disappeared immediately because their support, like Zionism, is not Israel or Saudi Arabia, but it is the United States: The United States is the real master of terrorism and we, Russians, Christian Orthodox, and Muslims, should fight together against the this evil in order to save western society and western culture. We shouldn’t demonize west as such. The people who voted Trump, for example, voted real changes against the establishment. Trump is delusion, deception, and disappointment, but the people who voted him has shown that there is a majority in America, which is against interventions, against colonialism, against globalism, and against the domination of fanatic crazy mad unipolar elites. These American people should be regarded as our allies. It may be difficult, but in order to cut the roots of terrorism, we have to overcome this system, not one terrorist group or network; because it is a nexus: it will re-appear in another form, like mushrooms. We cannot destroy mushrooms’ origin by cutting one mushroom, two mushrooms, or a hundred mushrooms. Similarly, the origin of terrorism is American hegemony, globalization and global elites, i.e., Dajjal. This Dajjal is at the center of terrorism and without eradicating Dajjal, we cannot win terrorism.

Habilian: So you believe that the US is not serious in his fight against terrorism?
Dugin: The United states tries to instrumentalize terrorism in order to manipulate it. terrorism should be controlled and should be used as well to fight with itself. For example, when some terrorist groups, manipulated by united states, appear in a country, they give them the reason to invade that country. For example, in Afghanistan, Americans had already supported Al-Qaeda and, and later invaded that country to fight the same terrorist group. At the same time, the US runs another policy: If these Muslims kill the others for not being Muslim, the other Muslims should do the same. So, Americans don’t fight terrorism, they use it. They create terrorist groups and when we close to defeat them, they arrive to help to rescue this controlled terrorist group by calling them “Freedom Fighters” or “Peaceful Opposition”. For example, after the fall of Gaddafi, they transported ISIS members and Salafists, from Libya to Syria. There is much evidence for it. So, they have created ISIS by their hands and also they helped ISIS emergence in Iraq because they have rejected any Sunni group from cooperation in construction of the country and indeed these groups have become victims of the same sectarian preachers sent by Saudi Arabia.

Habilian: Your country is combatting with terrorism in Syria along with Iran. On the other hand, the US claims leadership of a so-called international coalition against ISIS. Would you please compare Russia’s strategy in combating terrorism with the US strategy?
Dugin: They don’t fight with terrorism, they create it. But Russia fight with it seriously. A very important point here is that in the beginning of our encounter with the so-called Islamic terrorism or fundamentalist terrorism in the 90s, we, Russians, fought against all Muslim Chechens who tried to separate from Russia. But, during this fight, Russian government and Putin discovered that there are two fractions. There are traditional Chechnya Muslims by social national ethnic historical reasons and there are a group of Salafists who are totally controlled by CIA and Saudis. And we have separated them. We have proposed ex-enemy Akhmad Kadyrov, who was one of the radical fighters against us. He fought against Russia. He killed Russian soldiers being at the bottom of these Chechnya guerilla. But, in spite of all that we have given the hand to him and after his death to his son, Ramadhan Kadyrov. Why? Because we understood that there is maybe part of Muslims who have lost orientation or have made mistake and there are provocateurs. They are completely strange and completely far from traditional Islam because this Salafi began to destroy sacred places of the traditional Chechens. All Chechens are Sufi. There is not a Chechen not being Sufi. Every Chechen is Sufi. And these Salafis and Takfiris began to destroy sacred tombs of Sufis and that was beginning of disdaining of the Chechens that they fought against Russia. It is important to note the danger represented by Salafis and in that moment, we have made distinction between terrorist and people who was led astray and has lost their way. We didn’t judge them. We didn’t accuse them and after that they came to our side and with their help we have won terrorism and that way, we are proceeding in Syria and elsewhere. In our fight with terrorism wherever it be, first of all, we are in search for our friends in Islamic world who are our allies in this fight: Traditional Islam, whether Sunni or Shia, that is not sectarian, that is not radical, not extremist and we are joining forces. so, we are identifying evil not in Islam and any form of Islamic resistance, but in Takfiri groups and we will destroy them with the help of our new or old allies. That is the difference. When we try to come closer and closer to the core of these terrorist groups, we discover what the center of these groups is: Everywhere we find CIA spies, Saudi preachers and sometimes both of them in one person. So, we have discovered real reason of the terrorism and we cut the root. Because if the financial, political, and strategical help of the United States is cut off, then its effect on the elimination of terrorists will be greater than weapons and liquidation of the rest will be a technical thing. We have to cut the roots of terrorism and cutting the root requires identifying, and then, revealing its real nature.