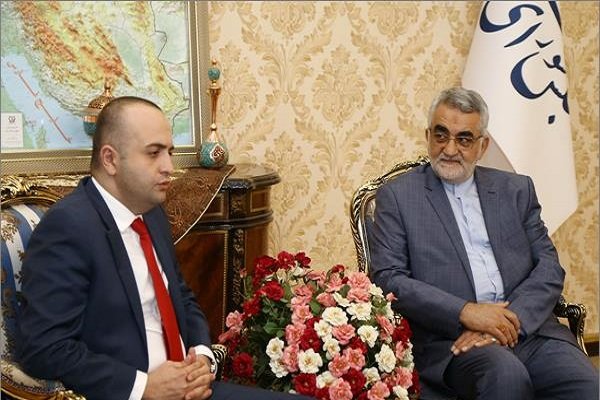 Senior Iranian MP Alaeddin Boroujerdi said Sat. that the US support for terrorism and its violation of UN-backed agreements like the JCPOA are continuing to destabilize the Middle East.
Chairman of Iran's Parliament National Security and Foreign Policy Commission Alaeddin Boroujerdi made the remarks in a meeting with the head of Iran-Georgia parliamentary friendship group Shalva kiknavelidze in Tehran today.
Boroujerdi expressed his satisfaction with the growing relations between the two countries of Iran and Georgia, saying that there are a lot of potentials in various political, economic and cultural fields to enhance the bilateral relations.
He said that the Iranian parliament was ready to help the bilateral relations to strengthen and grow more.
The senior Iranian lawmaker said US belligerent policies and support for terrorist groups and its violations of UN-backed international agreements are behind the instability in the region.
He referred to the humanitarian crisis in Yemen, saying that the killing of innocent children, women and civilians in Yemen is the direct result of American support for Saudi Arabia and its interference in Yemen's internal affairs.
Boroujerdi added that the Yemeni people after three years of resistance have inflicted a heavy military defeat on the invaders.
He went on to conclude his remarks by putting stress on the importance of holding economic meeting between the two sides and implementing the international agreements.
Shalva kiknavelidze, for his part, hailed the long-standing friendly relations between Iran and Georgia, saying that the two countries have had friendly relations based on mutual respect for each other.
He hailed Iran’s role in the fight against terrorism, saying that formation of Iran-Georgia parliamentary friendship group indicated the interests of Georgia’s high-ranking officials in expanding relations with Iran.
The Georgian official further stressed the need for maintaining stability in the region, noting that the expansion of economic relations can increase regional security.
He went on to put emphasis on the expansion of cooperation in the field of tourism, energy, transportation, and paving the way for private sectors and as well as implementing the joint projects between Georgia and Iran.