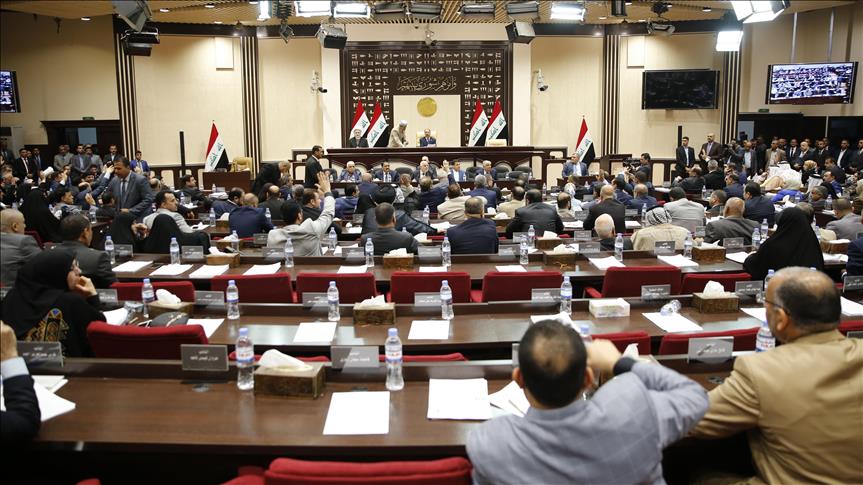 Iraqi lawmakers of various political orientations on Monday called on the government to expel the PKK terrorist group from Iraqi territory through coordination with Turkey.

The appeal comes two weeks after Prime Minister Haider al-Abadi warned northern Iraq’s Kurdish Regional Government (KRG) against involving the PKK in the ongoing dispute over the northern city of Kirkuk -- a move he said would be tantamount to “a declaration of war” against Baghdad.

During the 2003 U.S.-led invasion of Iraq, Kurdish Peshmerga forces seized the oil-rich Kirkuk province, prompting an influx of Kurds into the city. In 2014, the city was seized by Peshmerga after Iraqi forces fled before an onslaught by the Daesh terrorist group.

In recent weeks, Iraqi forces re-secured Kirkuk province, along with other parts of the country disputed between Bagdad and the Erbil-based KRG.

“Iraq should coordinate with Turkey to expel the PKK from Iraqi territory,” Haider al-Fawadi, an MP for Iraq’s Reform Bloc, a component of the Shia National Alliance (which holds 180 seats in the 328-member parliament).

“The Iraqi government must exert its authority throughout Iraq so as not to give terrorist organizations the opportunity to threaten the country’s security,” al-Fawadi said.

“The PKK has entered Iraq illegally,” he added. “We must coordinate with Turkey with a view to expelling them.”

“This terrorist organization is committing dubious acts in Iraq that could lead to civil war,” he asserted, calling for “serious steps” to be taken -- in coordination with Turkey -- against the PKK.

Hassan Khalati, an MP for Iraq’s National Wisdom Movement, a component of the National Alliance (which holds 10 parliamentary seats), also called on the government to take steps against the PKK “and eject it from Iraq, just as it did with the People's Mujahideen of Iran” (otherwise known as the Mujahideen al-Khalq).

Under a 2016 agreement between Baghdad and the UN, 280 members of the Mujahideen al-Khalq -- who had been staying at Liberty Camp near Baghdad International Airport -- were deported to countries in the EU.

“We reject the presence on Iraqi territory of terrorist groups that operate against neighboring states,” Khalati said.

“The PKK has recently played a negative role in Kirkuk through its armed presence in opposition to the federal authorities,” he added.

Abdul-Aziz al-Dhalimi, an MP for Iraq’s Al-Ahrar bloc (35 seats in parliament), likewise asserted that the PKK threatened the security of both Iraq and Turkey.

“The Iraqi government should take a strong stance against any organization that threatens the security of Iraq and Turkey,” al-Dhalimi told Anadolu Agency.

He pointed to the close security coordination between Baghdad and Ankara seen during the last three years of Daesh ascendancy in Iraq.

“We must similarly coordinate against the PKK terrorist group,” al-Dhalimi said.

The PKK currently uses mountainous parts of northern Iraq as a platform from which to carry out attacks on Turkish territory.

According to unofficial reports, the PKK maintains an armed presence in the Sinjar district west of Mosul, where it took advantage of the chaos caused by Daesh’s 2014 onslaught in northern and western Iraq.

Mohamed Chihod, an MP for Iraq’s State of Law coalition (92 parliamentary seats), stressed the need for Iraqi-Turkish-Iranian coordination against the PKK -- and against the KRG’s recent bid to break up Iraq.

“The government should put an end to the dictatorship of KRG President Masoud Barzani and the PKK, which has sided with rebel separatists against the unity of Iraq,” he said.

Tension has steadily mounted between Baghdad and Erbil since Sept. 25, when Iraqis in KRG-held areas -- and in several disputed areas, including Kirkuk -- voted on whether or not to declare political independence.

The unconstitutional referendum was heavily criticized by most regional and international actors, with many warning it would distract from Iraq’s ongoing fight against terrorism and further destabilize the region.

Abdul-Rahman al-Loezi, an MP for Iraq’s National Alliance, the largest Sunni bloc in parliament (45 seats), also stressed the need to expel the PKK from Iraq.