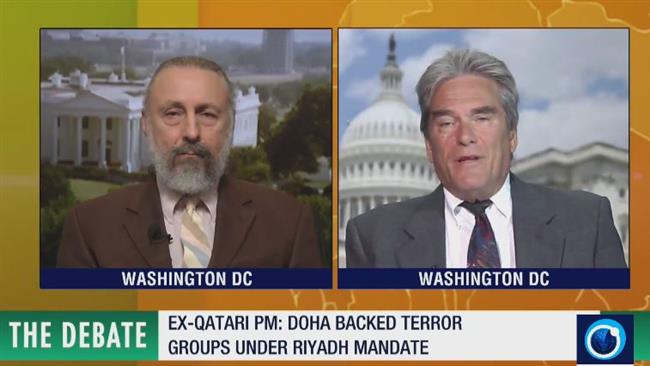 The crisis began in 2011 when anti-government forces took up arms against Syrian President Bashar al-Assad. Terrorist groups mushroomed across the country, all tasked with one mission; overthrowing the government. Six years on, the root cause of the conflict is being further revealed. Qatar’s former prime minister has admitted that his country did support the terrorist groups up until recently. In a televised speech, Hamad bin Jassim, reiterated that the support was provided under Saudi Arabia’s mandate and with coordination from the United States. So, if Washington is actually behind supporting the terrorists, should the United States be labeled a rogue regime which funds and supports extremist elements in the world? Following is an interview Press TV has conducted with James Jatras, a former US Senate foreign policy analyst, and Michael Lane, the president of the American Institute for Foreign Policy, about the revelations made by the former Qatari prime minister.

Michael Lane maintains that what Hamad bin Jassim said about Washington’s role in Syria was not surprising at all, because American officials have been overtly acknowledging that the US is pursuing regime change in Syria through supporting “moderate rebels.”

“We knew that Washington and its allies were interested in supporting the groups that they did not consider to be terrorist, the so-called moderate rebels in Syria. They were interested in regime change, something to destabilize and overthrow the Assad regime. So, it is not really news that there is assistance providing to these groups. There were essentially a proxy fighting on behalf of the United States, Saudi Arabia, Qatar, and other entities,” Lane noted.

Asked about the US-made armaments found in the headquarters of terrorist groups like the al-Nusra Front, he replied that reports by the Unites States show that the Free Syrian Army (FSA) and other so-called moderate rebels that were receiving direct aid from Saudi Arabia, Qatar, and Turkey have forwarded them to other groups, including the al-Nusra Front, based on the logic that they are fighting a common enemy.

“The reason that happened I think is plain. If you look at it realistically, they are a very effective fighting force against the Assad regime and the ground forces there that were receiving the Western and the Arab aid and the Turkish aid would say that the enemy of my enemy is my friend and therefore they were feeding tools and weapons to al-Nusra Front which was an effective force against their common enemy,” the analyst said.

However, the other guest James Jatras dismissed Lane’s arguments about the moderate rebels in Syria, stressing that all groups fighting under the guise of moderate rebels, including that FSA, are fanatical Salafist terrorist groups who share the ideology of the al-Nusra Front.

He further underlined that everything that is being said by the former Qatari prime minister not only has the ring of truth, but also is coming right from horse’s mouth.

“They [Qataris] are saying that we were doing this under instructions from the Americans and the Saudis. And the only question I have is [whether] anybody [is] going to be held accountable for it. Maybe John Brennan who was running the CIA at the time; was coordinating aid to al-Qaeda and its offshoots in Syria in order to overthrow a secular, legitimate, and internationally recognized government and install a bunch of al-Qaeda-linked terrorists,” Jatras concluded.