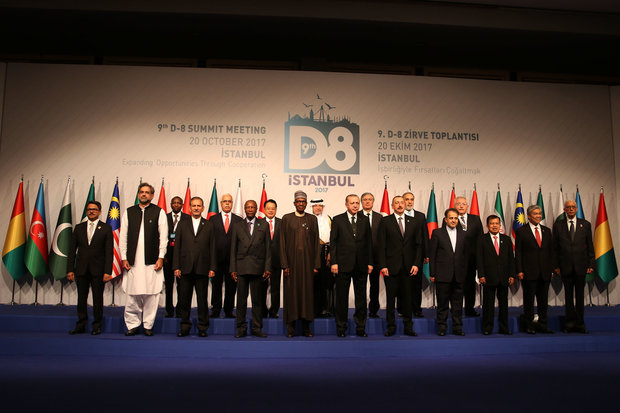 Addressing the 9th Summit of the D-8 Organization for Economic Cooperation on Friday morning in Istanbul, Iran’s Jahangiri said, “on behalf of the Islamic Republic of Iran and the Iranian people, I congratulate all the members of the Ninth Summit of the D-8 Economic Cooperation Organization and the 20th anniversary of the establishment of the body.”

“I thank the Turkish government for hosting and holding the important summit and the efforts of the Islamic Republic of Pakistan for chairing the organization over the last five years, and I wish success for the Republic of Turkey as the chair of the new term,” he added.

Directing his words to heads of states and governments present at the summit, Jahangiri said “the world today faces challenges, crises and challenges and we believe that the emergence the current risky conditions are influenced by two important factors including application of aggressive and interventionist policies on the one hand and rise of extremism and regional violence on the other.”

Iran’s first VP continued “these two political phenomena are not consistent with any of the developments and realities of the world and the region. Our era is the age of development of modern science and technology, the era of awareness and awakening of nations, and of democratic development and the desire for coexistence in a diverse and multicultural world and not a time for unilateralism in the style of colonialism, nor for extremism and violence in the name of ethnicity and nationality or religion.”

He said that divisions, violence and terrorism were dangerous everywhere and in every name and they were even more dangerous in the Islamic world, in the name of religion, ethnicity and nationality. We are honored to have a religion, culture and civilization which are the source of mercy, kindness, morality, justice and freedom. We need to stand against divisions, violence and terrorism by relying on Islam, Shia, Sunni and all Islamic religions. We must also come together to confront ISIL, violence, extremism, division and war.

“We must all be sensitive to overwhelming and radical policies of the current US government and the Zionist regime in the region, and we must not allow these intervening policies to exacerbate violence and extremism in the Islamic world,” said the Iranian first vice president adding “we should never allow violent and militaristic solutions to take place of political dialogue and diplomacy, and put lives of innocent and Muslim people at risk.”

“Unfortunately, today the Islamic world faces numerous threats,” he said explaining “on the one hand, the oppressed people of Palestine, Iraq, Afghanistan, Yemen and Bahrain are burning in the fire of war, conflict and violence, and Rohingya Muslims in Myanmar are trapped in genocide and extremism. On the other hand, the recent illegal referendum in the Iraqi Kurdistan region has endangered national integrity of Iraq and threatened stability and security of the region preventing the right for full development of ties with Kurdish brothers and sisters. All these risks and threats require coordination and coexistence at regional and international levels.

The official said that the Islamic Republic of Iran, as the initiator of the global alliance against violence and extremism, considers negotiations on the basis of common interests and win-win strategy as the only way to resolve global and regional crises.

Jahangiri added that over the past 20 years, the D-8 Economic Cooperation Organization has witnessed efforts and initiatives that have led to a series of agreements and actions in order to organize significant intra-group cooperation.

Undoubtedly, the path to development, growth and prosperity is replete with ups and downs through which countries and governments would never succeed individually. This way requires cooperation and interaction of countries with each other in all fields.

Iran’s 1st VP later maintained that “the D-8 Economic Cooperation Organization (D-8) has the potential and capabilities for developing countries to take advantage of capabilities of member states. The Islamic Republic of Iran, as it has done in the past, will spare no effort and assistance in the process.”

Jahangiri went on to assert that the Islamic Republic of Iran, with the world’s largest reserves of gas and oil, is ready to contribute to global energy security and upgrade international transit corridors through joint venture in maritime, rail and road infrastructure.

He noted that Iran’s economy has a unique potential for growth and development. The feature, along with Iran’s political success in finalizing and ratifying international conventions, removing unlawful sanctions and gaining global support, has led Iran to assert its credibility as a firm and stable global economy much to the chagrin of the global arrogance. Hopefully, using this opportunity and in the form of two-way and multilateral collaboration, Iran will have a deeper and wider cooperation with each member state.

He emphasized that the Islamic Republic of Iran would never consider itself as a rival of any country in the region, and would respect the ability of all Muslim countries to be capable of strengthening the Islamic world. Peace for all, development for all and prosperity for all will bring about a safe and secure world free of violence and extremism, and we must work together to build such a global world.

At the end of his remarks, Es’hagh Jahangiri appreciated efforts of the government and people of Turkey for hosting the summit and thanked Dr. Seyed Ali-Mohammad Mousavi, the current Secretary-General of D-8, and his great efforts to advance the objectives of the organization, and welcome Mr. Dato’ Ku Jaafar Ku Shaari as the next Secretary-General and wished his success.