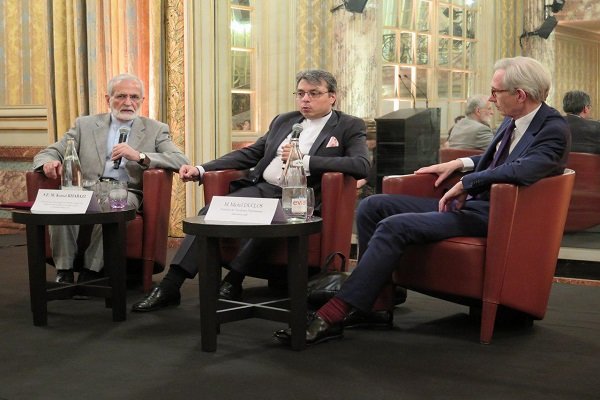 Kamal Kharrazi made the remark in a conference entitled “Iran, Island of Security in High Tension Region of Middle East” at the international academy of science in the French capital.

He went on to add, “it is not justifiable to the Iranian nation that France would shelter a loathsome terrorist group whose activities are of high concern to us.”

Kharrazi was referring to Mujahedin-e Khalq Organization (MKO), a terrorist group with a free reign in France which has carried out a number of anti-Iranian moves such as assassination of Iranian nuclear scientisits, and collecting intelligence for US and the Israeli regime.

“If it is true that their [MKO’s] activities are under surveillance by France’s security services and all their terrorist activities are neutralized on the French soil, then all these measures have not been able to stop the MKO from carrying out their criminal activities inside Iran,” he said.

During Javad Zarif's recent visit to Paris in early July, the Iranian foreing minister raised the issue of the free activities of MKO with the French officials, saying France’s green light to MKO's activities is a ‘moot point’ in Tehran-Paris relations. He also maintained that the French side had emphasized that they had no connection with the terrorist group.

Kharrazi went on to add, “removing MKO from the list of terrorist groups shows that fighting terrorism is a politicized measure defined by momentary interests.”

He named Sudan as such example, whose name was included in the list of terror-sponsoring countries when the country’s policies ran counter to those favored by the Western world, but was later removed from the list when Sudan started bombing the innocent people of Yemen within Saudi Arabia’s coalition.

“Unfortunately, some countries sacrifice their national security for some transient financial interests,” he stressed.