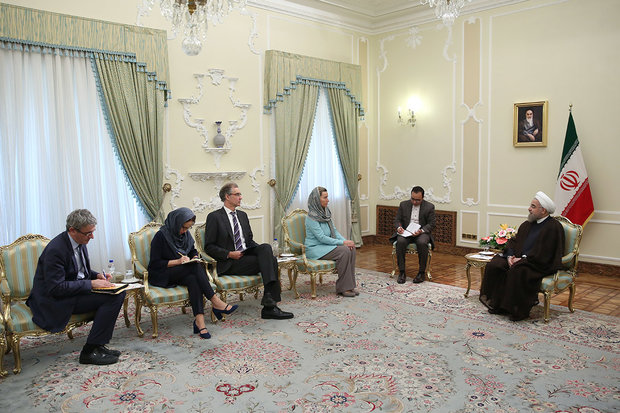 TEHRAN, Oct. 29 (MNA) – In a meeting with EU foreign policy chief in Tehran, Iranian President Rouhani urged the EU to use its political power for exerting pressure against terrorist sponsors in the region.

The High Representative for Foreign Affairs and Security Policy/Vice-President of the European Commission, Federica Mogherini, met with President Hassan Rouhani on Saturday, following her meeting with Foreign Minister Zarif that focused on regional developments.

During the meeting, President Rouhani deemed any support given to terrorism indicative of raising the hopes of terrorists in the region and the world, adding “if the European Union, for any reason, is reluctant to use its military presence to combat terrorism in the Middle East, it can instead use its political power to exert pressure on sponsors of terrorism in region and prevent them from funding terrorism. This can have a significant impact in the fight against terrorism.”

President Rouhani highlighted the need for Iran-EU cooperation on settling regional issues and expediting the restoration of security to the region, adding “all need to realize that the Syrian situation has no military solution, and can only be resolved through political means.”

“For this end, the EU can prove to be very effective in creating security and tranquility in Syria with the help of regional countries,” he added.

Rouhani then turned to bilateral relations, and maintained that through expansion of cooperation, Iran and the EU could become major trade and economic partners in the region; “Iran with its rich energy resources can provide long-term energy security, and become a secure transit route between North and East Asia and Europe,” he said.

The President noted that Iran, after the nuclear deal and within the framework of mutual interests, is ready for a comprehensive cooperation with the EU in all areas, adding “the Islamic Republic has been fully committed to the implementation of the JCPOA and now expects the other side to fully comply with its commitments under the nuclear deal.”

“Today, certain countries in the region have not yet experienced democracy and free elections, and exert heavy pressures on their citizens, under the name of Islam, which are contrary to human principles and citizenship rights, particularly the rights of women,” Rouhani said, adding “Iran is ready to expand cooperation with the EU toward promotion of citizenship rights in regional societies.”

Federica Mogherini, for her part, said the EU is fully committed to the JCPOA and is determined to expand economic cooperation with Iran within the framework of mutual interests.

“Iran and the EU’s trade transactions have increased by 43 per cent in the last year, and many European banks are ready to resume their activities in Iran,” she said, adding “we assure people that diplomacy can yield positive achievements in regard to signing and implementing agreements.”

The EU foreign policy chief further deemed terrorist groups such as ISIL and al-Nusra Front a great threat to the world, adding “the European Union needs to cooperate with Iran as a key power in region toward the settlement of regional conflicts.”

She also highlighted the need for expediting delivery of humanitarian aid to people of Syria and Yemen.

Mogherini is scheduled to fly to Riyadh later in the day to discuss the regional issues with Saudi officials.