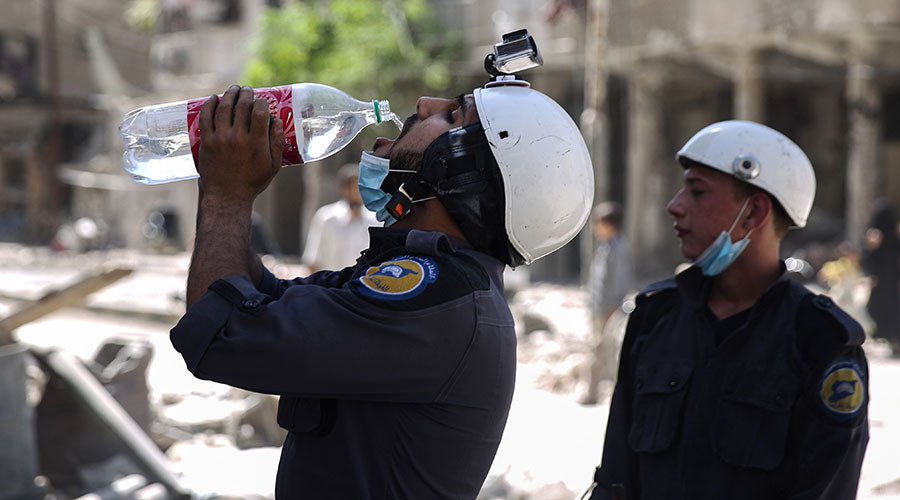 TEHRAN (Tasnim) – An American columnist and political analyst said Syrian civil defense volunteers, known as the White Helmets, are nothing more than terrorists masquerading as humanitarians.

“They (the White Helmets) are nothing more than a terrorist support group. White Helmets was founded by James Le Mesurier, an admitted former British army officer and mercenary with the Olive Group, a private contracting organization that is now merged with Blackwater-Academi into Constellis Holdings. Although White Helmets half-heartedly attempts to hide its source of funding, the organization is linked to George Soros through a PR firm named Purpose Inc., a pro-war firm that argues for Western intervention against Assad. The co-founder of Purpose is Jeremy Heimans, who also helped found Avaaz, a “pro-democracy” group connected to Soros’ Open Society Foundation, SEIU, and MoveOn.org,” Brandon Turbeville told the Tasnim News Agency.

Tasnim: As you know, Syria has been gripped by foreign-backed militancy since March 2011. In one of your latest articles you stressed, “With the recent events transpiring in Syria – the US bombing of Syrian government soldiers in Deir ez Zour and the subsequent sabre rattling of the United States and Russia – it is clear to anyone paying attention that the world is edging closer to the possibility of a major confrontation between two world nuclear powers. Such a confrontation would spell disaster not only for the populations of those countries but also for the entire earth if the full military power of Russia and the United States are ever set loose.” Kindly explain more on the ultimate conflict. What are your reasons for this confrontation?

Turbeville: As the U.S. and its allies – NATO, (P)GCC, Israel – continue to push aggressively in Syria, they are bound to meet head on with not only the Syrian military but the relevant forces that have traveled to Syria to aid in the destruction of ISIS – Iran, Hezbollah, etc. But what is so dangerous is the fact that the Russians appear to have drawn a line in the sand in Syria. The Russians realize that Russia itself is one of the ultimate goals of this Western adventure and realize they can either do what they can to stop the onslaught now or pay the ultimate price a few years down the road. For this reason, the U.S. is going to meet Russian forces eventually if it continues engaging in direct military action in Syria. The Russians have already said as much if the U.S. bombs the Syrian military again. Of course, who else would the U.S. want to bomb but the SAA? ISIS? The U.S. has been bombing in support of ISIS and related terror organizations ever since the day the bombing campaign began. The only time ISIS forces are actually hit is when they legitimately threaten U.S. soft sites like oil wells or when the U.S. needs to move them somewhere else, a process I have labeled “death squad herding” in my articles. If the U.S. and Russians actually collide in Syria, the ramifications are global. The temptation to expand the war to other theatres like Ukraine will no doubt follow. But what happens when one side gets the better of the other? Will the nuclear weapons come out? While the Russians have acted solely in self-defense, the U.S. leadership has shown itself to be completely unhinged and thus we have to wonder whether or not they would truly be willing to push the button out of a war psychosis.

Tasnim: In another article on Syria, you said, “What the United States is doing to Syria is truly shameful and immoral but, despite the horrors the US and NATO countries have visited upon Syria, the people have refused to give in.” What is the US doing in Syria? What is it looking for?

Turbeville: The United States has been engaged in a proxy war against Syria since at least 2011. The plan has been much longer in the making, however. The U.S. funded the original “protests” in 2011 that were violent from the very first moment and turned into the most brutal humanitarian condition of the 21st century. The U.S. has been facilitating, arming, and directing ISIS, Nusra, al-Qaeda, and virtually all of the other offshoot groups in a war against the Syrian government. Never let anyone tell you the groups are different. They are all the same Wahhabi fanatics, funded by Saudi Arabia and supported by Israel and the U.S. as ISIS. Only the names are different.

Now to the question of what the U.S. is looking for. You will find that there is seldom only one reason for doing something when it comes to the agenda of an international oligarchy. With Syria, we see a number of reasons for the U.S. focus. Of course, there is the Qatari pipeline deal that was nixed in favor of the Russian pipeline. Besides enriching the Qataris, preventing Russia from ever being able to hold leverage over Europe is one reason the West wants to dismantle the country. Another reason is the fact that Syria has largely been a holdout when it comes to the Anglo-American corporate financier system. Most of the West’s international corporations and global banks were not in operation in Syria and there was not an emerging market for them any time in the near future. The goal for the Anglo-American system is, after all, world hegemony, and Syria was not fitting into that mold. Lastly, it is important to understand that Syria is also a stepping stone geopolitically speaking. If Syria falls, Lebanon falls and so does Hezbollah as a resistance force. Iran is next on the chopping block and, after that, where is there left to go but Moscow? Beijing? Zbigniew Brzezinski has even written about this concept in his book “The Grand Chessboard” where he elaborates about the plan to balkanize Russia into three parts. You can easily see where the danger lies for the rest of the world now, assuming Russian leaders understand the ultimate target of these proxy wars and I think there is evidence that they do.

Tasnim: Who are the White Helmets in Syria? Some experts say that the White Helmets are an invention of state intelligence agencies and NGOs who seek the overthrow the government of Syrian President Bashar al-Assad. What do you think? Please explain on this.

Turbeville: That’s exactly what the White Helmets are. They are nothing more than a terrorist support group.

White Helmets was founded by James Le Mesurier, an admitted former British army officer and mercenary with the Olive Group, a private contracting organization that is now merged with Blackwater-Academi into Constellis Holdings. Although White Helmets half-heartedly attempts to hide its source of funding, the organization is linked to George Soros through a PR firm named Purpose Inc., a pro-war firm that argues for Western intervention against Assad. The co-founder of Purpose is Jeremy Heimans, who also helped found Avaaz, a “pro-democracy” group connected to Soros’ Open Society Foundation, SEIU, and MoveOn.org.
Today, the organization is being provided with millions of dollars of funding from Western governments, with $16 million coming from USAID itself.

White Helmets have also been caught posting fake photos and using those pictures for fraudulent purposes. In one instance, they used photos of an injured child taken days prior to the event they were trying to blame on the Syrian military later in the week. You can see videos of the White Helmets, armed and praising Nusra, waiting in the wings for civilians to be executed so they can rush in and dispose of the body.

This organization is wholly funded, directed, and promoted by Western governments, intelligence agencies and Foundations for the purposes of assisting Western-backed terrorists in destroying secular Syria.

Tasnim: What’s your prediction for the future of international peace-making efforts aimed at resolving the crisis in Syria? Is the US really after ceasefire in the Arab country?

Turbeville: I don’t have high hopes for any peace deals. To be honest, I’m not pulling for them either. While we all want peace, we constantly see these “ceasefire agreements” and “peace deals” being introduced and negotiated at very convenient times for the terrorists. Every time the Syrian military gains the upper hand, the United States with the United Nations in tow, comes running to the negotiating table demanding “peace talks.” Inevitably, these talks simply give the terrorists time to regroup and re-arm so as to launch new and more powerful attacks on the Syrian government areas. Anyone can see this. Yes, we all want peace but not sneaky peace deals that are military strategy as opposed to genuine desire to end the fighting. We all want peace but what kind of peace would it be if Syrians are forced to legitimize religious fanatics, rapists, and murderers? The United States needs to immediately cease support for terrorist organizations in Syria and allow the Syrian military to negotiate with terrorists in the only manner that is effective, a strategy the SAA has demonstrated it is capable of implementing. If this happened, peace would not be far behind.