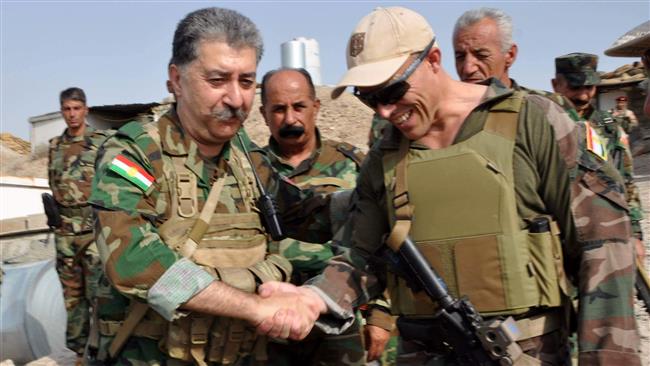 An anti-Iran Kurdish terrorist group says it has received many rounds of military training from US advisers as well as arms and ammunition from both Washington and European countries.

Hussein Yazdanpanah, the commander of the so-called Kurdistan Freedom Party (PAK), which seeks to carve out an “independent Kurdish republic” inside Iran and has staged many deadly terror attacks inside the Islamic Republic, made the remarks while speaking to the Associated Press, which reported them on Thursday.

“They helped and trained us within the framework of the fight against Daesh,” he claimed, referring to the Takfiri terrorist group that has been ravaging Iraq and Syria since 2014.

He said, however, that the alleged fight against Daesh “was never an alternative to their struggle” against Iran. He said his group, which had launched six attacks inside Iran this year alone, would continue striking the Islamic Republic.

Iran’s Islamic Revolution Guards Corps (IRGC) forces have, time and again, clashed with separatist Kurdish militants who had crossed over into the country’s west from neighboring Iraq.

Italian Army Capt. Giulio Macari, a spokesman for the US-led coalition that has purportedly been fighting Daesh in Iraq and Syria since 2014, meanwhile, alleged that the coalition did not choose the groups that it was training. Yazdanpanah said, though, that the trainers “no doubt” knew who the members of his group were.

He said the PAK militants had had three rounds of training by American advisers between March and September 2015 at the front-line where they were deployed in the central Iraqi Kirkuk Province. The group’s militants went through further rounds of training later alongside other Iraqi Kurdish fighters, he said.