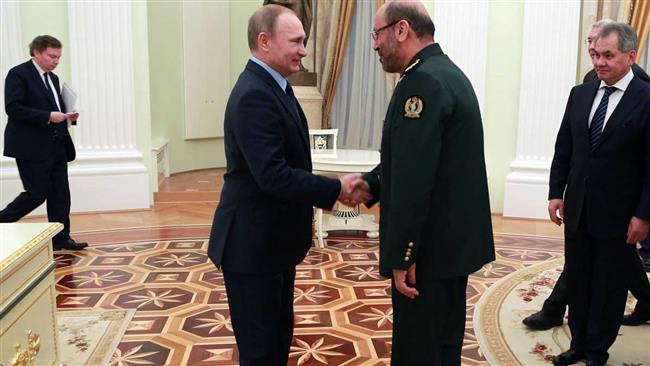 Iranian Defense Minister Brigadier General Hossein Dehqan, in a meeting with the Russian president, has called for further promotion of cooperation among regional countries to eradicate terrorism.

The meeting between the Iranian minister and Vladimir Putin was held in the Russian capital, Moscow, on Tuesday, and aimed at discussing bilateral issues as well as regional and international developments.

The Iranian defense chief described as “very good and constructive” the defense and security cooperation between Iran and Russia, saying Tehran and Moscow enjoy “strategic and long-term relations.”

Stating that the two countries’ presidents are determined to expand all-out ties, Dehqan said “such cooperation can offer a proper model for regional cooperation.”

Putin, for his part, expressed satisfaction with defense and security cooperation between Iran and Russia, which he said is in line with the mutual interests of the two countries, and called for the promotion of such ties within the framework of implemented agreements.

The Russian president highlighted strategic relations between Tehran and Moscow in containing regional crises and said the two countries play an important role in the establishment of sustainable security in the region.

Dehqan also held talks with his Russian counterpart Sergei Shoigu on Tuesday, to exchange views on bilateral issues as well as the latest developments in the region.

During the meeting, Shoigu said Iran and Russia are facing common challenges in the region and urged further cooperation between the two countries to confront such threats, Russia's state news agency TASS reported.

“I am sure our meeting will help promote closer friendly ties between the Russian and Iranian armed forces,” Shoigu said.

The Russian defense minister pointed to a military agreement that was signed between Iran and Russia in 2015, saying it created a legal framework for closer cooperation between the two countries’ defense ministries for a long-term perspective.

During Shoigu’s visit to Tehran in January 2015, the Iranian and Russian defense ministers signed an agreement to improve cooperation in defense and military arenas.

“We believe that the efficiency of Russia’s and Iran’s efforts against international terrorism will depend on the practical realization of bilateral cooperation projects. We want Russian-Iranian cooperation in this sphere [to] be long-term and comprehensive,” Shoigu told his Iranian counterpart.

The Russian defense minister further said that Moscow and Tehran are ready to coordinate their cooperation on a wide range of global and regional problems.

“The years-long relations between our countries are distinguished by the high level of confidence and readiness to coordinate approaches on a wide variety of global and regional issues,” he said.

Shoigu said that the November 2015 talks between Leader of the Islamic Revolution Ayatollah Seyyed Ali Khamenei and President Putin in Tehran gave a fresh impetus to cooperation between the two countries.

During the meeting, Ayatollah Khamenei pointed to the appropriate level of cooperation between Tehran and Moscow in politics and security and said the Russian president has pursued a “very good and innovative” stance on different issues, particularly over the past 1.5 years.

Also on Tuesday, the Iranian defense minister held a meeting with Russian Deputy Prime Minister Dmitry Rogozin, during which the two officials discussed mutual relations and the latest regional and international developments.

They described enhanced Tehran-Moscow cooperation as important and urged decisive and all-out fight against Takfiri terrorist groups operating in the Middle East and Africa.

The Iranian defense minister arrived in Moscow on Monday at the head of a high-ranking delegation to hold talks with senior Russian officials.

Iran and Russia both support the Syrian government in its fight against Takfiri groups in the war-stricken country.