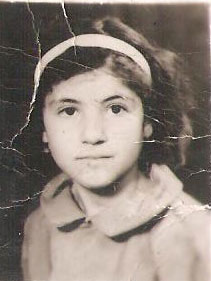 Zolfa Khezri was born on September 21, 1971 in a Shafi'i family in the city of Sardasht in West Azerbaijan Province. Her father was a farmer and her mother was a housewife. Zolfa had outstanding qualities as a child that distinguished her from the girls of her age. Cleverness and intelligence were the features that allowed her to do and learn things faster than her peers.

Zolfa was a very diligent and active student during the school years so that she was usually appointed as the top student and rewarded by the teachers. Not only was she successful in her lessons, but also she was good at learning art works and teaching them to others.

In Sardasht, it was common for the girls of her age to knit hats. She learnt this skill in a short time so that she could knit several hats a day. Among other things, she was a good cook, a skill that she had learned from her mother with insistence.

Although more mature of her age in terms of manner and behavior, she still had some of mischievous and naughty qualities of a girl, but she was careful not to upset anyone with her actions. She was a polite and funny girl and paid great respects to the elders so that even when her older brother upset their parents, she talked him into apologizing for his misbehavior.

As a young girl, she was punctilious about doing religious duties on time, especially saying her prayers.

On Decemebr 19, 1980, Zolfa and her family were about to visit some relatives in a village near Sardasht, but before they leave, a friend dropped by their house. Her mother was busy entertaining guests. Zolfa, who was ready to go to the party, did not return home and stayed on the street with some friends knitting hats until the guests were gone.

Around noon, she was sitting in the street when suddenly she heard the horrible sound of an explosion. People were scared and everyone ran to a corner to take shelter. In wake of the struggles of counterrevolutionary groups, children had learned to immediately find a safe place at the time of explosion. Thus, Zolfa ran to toward their house, but as she was about to pass the entrance, several shrapnel hit her small and frail body, making her fall on the ground. Zolfa brother, who was preparing to go to Friday Prayers, hurried to her help, but he found the body of her sister covered in blood. The 9-year-old Zolfa lost her life on the spot, ascending to the heaven to meet her Creator. Later, MKO terrorist group assumed the responsibility for the blast that had led to the martyrdom of Zolfa.