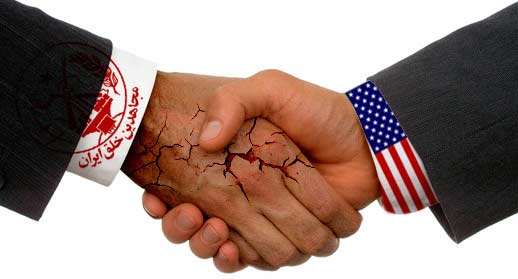 At the same time as thousands of small and medium-sized Italian companies are about to sign trade agreements with the Islamic Republic of Iran and Imam Khamenei, Supreme Leader of the Iranian state, is launching a decisive and merciless struggle against terrorism of Daesh, the Italian government, irresponsibly (but intentionally), continues to grant full political freedom to the clearly anti-Shia and anti-Iranian Organization Mujahedin-e Khalq (MEK) and its related acronyms. A serious choice that proves the short-sightedness of a government policy, to Renzi, totally subordinate to the imperialist American and Israeli foreign policy.

What is the MEK, what is its history?

The MEK was founded in the '70s as an Islamo-socialist organization, it participated in the struggle against the Shah Mohammad Reza Pahlavi, only to later do not recognize the new government of Khomeini. When the war broke out between Iran and Iraq - in which the two countries devastated one another, these (new) jihadists made the disastrous choice of siding with Saddam Hussein, at the time considered by most leftist Muslims as a watchdog of the United States. The National Liberation Army (NLA) was founded with the help of Hussein as their armed wing. Because of this choice the MEK’s path antagonized the majority of the Iranian people who considered him ''guilty of having helped to kill the children of Iran ''. After the US invasion of Iraq, the MEK became in fact to be at the service of Washington beginning with its leaders Massoud and Maryam Rajavi.

The MEK’s anti-Shia and anti-Iranian hatred transformed its substance, into abandoning its original socialist inspiration. The Mojahedin-e Khalq obtained coverage and support of Israel and its intelligence service (Mossad); moreover, the approach if not the enslavement against Tel Aviv was the obligatory path to be able to continue their plainly anti Iranian activities.

Mohammad Javad Larijani, a close associate of Khamenei, in an interview with NBC revealed that "According to the Iranian government many recent attacks (such as explosions in military depots) and terrorist attacks (such as those against Iranian scientists) are conducted through a collaboration between Israel and the Mojahedin." This thesis could be considered until recently as Iranian propaganda but - as noted by an article published in Linkiesta - now the evidence of its truthfulness seems unexceptionable and accessible to all.

We read the online Italian newspaper that "Journalists have NBC continued its investigation in the United States, investigating the information gathered by the CIA. On February 9 of this year three public officials, in three separate interviews, have confirmed this link. Israel provided weapons, training and money to the MEK, for terrorist actions that were carried out in Iranian territory”. [1]

The sources have emerged: those who kill Iranian scientists? Bibi (Netanyahu), responds Linkiesta. The interesting thing, nailing Israel and anti-Iranian propagandists in Europe, is that the Israeli government has never denied his involvement. On the contrary, Lieutenant-General Benny Gantz was allowed to say that Iran should expect more “unnatural" events. [2]

Although, the MEK was formally listed as terrorist organizations by the US State Department, in 1997 (from 1997 until 2012), Seymour Hersh has revealed the continued support of the Republican administration for this organization. In 2008, the great journalist wrote an article entitled "Preparing the battlefield" where he explained that "The MeK was on the terrorist list of the State Department for more than a decade, but in recent years the group has received arms and intelligence, directly or indirectly, from the United States. Some of the secret funds for a new permit, said the Pentagon consultant, could end up in the coffers of the MeK." US poured money into the coffers of the Mujahedin, certainly not for humanitarian purposes. The script seems to be the same as always: to eliminate the enemies of the US.

In the same opinion is Ismail Salami of the GlobalResearch. His analysis seems to leave no room for doubt "The terrorist Mujahedin Khalq Organization aka MKO or MEK Seems to be a ubiquitous agent any time there is an assassination in Iran. A shadowy cult with myriad of financial, military and intelligence connections to Tel Aviv and Washington, the MKO works in league with Kidon, the assassination unit within the Mossad. There are firm reports indicating that the MKO members have received military and intelligence training both from the US forces as well as from the Mossad ‘'. [3] In the same article a report by Richard Engel and Robert Windrem of the NBC News was quoted, "cites two anonymous senior US Officials with two interesting claims: 1) That it was MEK Which perpetrated the string of assassinations of Iranian nuclear scientists and 2) the terrorist group "is FINANCED, trained and armed by Israel's secret service." I know the report testifies the veracity of what Iranian officials have asserted about the involvement of Israel with MEK and the killing of Iranian nuclear scientists on the soil.

In 2009, the MEK (or MKO) tried to assassinate former President Ahmadinejad. The news was picked up by many international media including also Il Sole 24 Ore 4, although the incident was not reported in its severity (Il Sole 24 Ore edulcorò the news with the typical attitude of the Western media). The statements of Ahmadinejad were moving: "The stupid Zionists have hired mercenaries to assassinate me." It would seem obvious that this organization is in direct hetero effects.

After this 'enterprise', fortunately failed, the jihadists intensified their relations with the US, France and Israel.

A year later, it organized a demonstration in Paris against the legitimate government of Tehran in June 26, 2010. While Obama distanced himself from these terrorists, the neocons continued to support them; the various French governments, even continued to host their sites. On that occasion "About 30,000 people from all over Europe, have heard the speeches of former Prime Minister of Spain, José Maria Aznar and former US ambassador to the UN, John Bolton, who have just founded with the Friends of Israel Initiative- asking the State Department not to consider the People's Mujahedeen a terrorist organization, and the European Union to strengthen the unilateral sanctions against Iran " 3. At that episode, certainly, the group represented the prelude to something more dangerous: the CIA was preparing to give the MEK qualified trainers as well as a wider network coverage intelligence. Said and done.

Journalist Seymour Hersh has reported the presence of jihadist training camps connected to MEK in Nevada. Hersh writes: "They got the standard training in commo, crypto [cryptography], small-unit tactics, and weaponry-that went on for six months [and] they were kept in little pods." 4 The neocons have put the anti-government Iranian group in terms of hard hitting, and to provide even serious damage to the civilian Shiite population.

2012 was the year in which the Mujahedin ceased to be terrorists in Washington. On January 6, they organized a conference in Paris which was attended by members of the US elites including Tom Ridge, John Bolton, Howard Dean and French high profiles such as Philippe Douste-Blazy, Andre Vivien.

At this point a question is raised: Do the Mujahedin-e Khalq have relationships with Daesh and Al Qaeda?

Certainly the MEK has collaborated with the US in the destruction of Iraq Baathist, his former patron, and shares with the same anti-Shia hatred that Daesh does. The hypothesis of a collaboration between the two jihadi groups is certainly founded and it is very likely that the Mujahedin militants could be transformed to Daesh (or vice versa?).

Again, it is necessary to say that the evidences are not lacking: when Daesh began his bloody raids in Iraq, members of the MEK argued that any anti-terrorist measures would represent a violation of the Security Council of the United Nations.

While the men of Al Bagdadi were massacring Christian communities, Shia and Kurdish in Iraq and Syria, Saudi Arabia and Israel intensified their support for the MEK. The website of Iran's Press TV quoted Iran-Interlink that "According to sources, who declined to be named, the MKO terrorists are undergoing training on how to conduct terrorist operations in Iran and Iraq and are receiving technical as well as information technology (IT) training from Israeli agents ". [7]

And 'he same as many members of the Iraqi Ba'th, after 2008, who have passed into the ranks of Daesh, it is very likely that the MEK / MKO has followed the same parable, in fact many weapons belonging to the anti-government Iranians were found in supplies of mercenaries of Al Bagdadi.

Yet, despite this, the leaders of the Mujahedin continue to give instructions in the EU institutions on democratic rights, especially civil and political.

How does the MKO make a living?

The MEK is an 'organization of a dubious purpose with strong connections with the most militaristic right-wing American imperialist sectors. The Washington’s high- profiles enjoy the MEK’s donations whose men are allowed to move freely, organizing activities and events planned to delegitimize what they call “the anti-democratic governments in Iran”. The figures in these donations are large, the New York Times has a precious revelation: "Many of the American supporters, though not all, accepted fees of $ 15,000 to $ 30,000 to give speeches to the group, as well as travel expenses to attend MEK rallies in Paris. Edward G. Rendell, the former Democratic governor of Pennsylvania, said in March he that had been paid a total of $ 150,000 to $ 160,000 ". [5]

The strategy of the Mujahedin is to disguise themselves: they are sometimes as Marxist and Islamic organization managed to convince large sections of the left Eurocentric; sometimes they create artificial acronyms such as the Association of Democratic Women in Iran. The behavior of a representative, Davood Karim, who repeatedly took part in the campaigns of the Zionist right Islamophobic Roman, is somewhat ambiguous.  [9]

In Italy, some acronyms related to the MEK have also seized attention of several verbal anthropologists

such as Tiziana Ciavardini - some visible also on her facebook page – that intentionally and clearly intimidate and slow down the cross-cultural and inter-religious dialogue that the Ciavardini herself has been pursuing so meritoriously, for years.

In conclusion, I think we can say that despite attempts to disguise themselves behind usual ideological and political cover, the real nature and purpose of this organization is the destabilization of the Islamic Republic of Iran. A goal which, as we know, the various US administrations pursued for decades now.