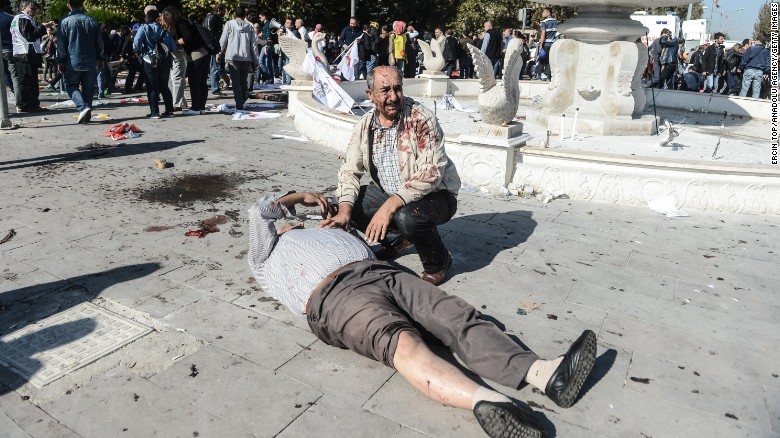 Two explosions at a peace rally in the Turkish capital Ankara have killed at least 95 people and injured 245, according to officials.

TV footage showed scenes of panic and people lying on the ground covered in blood, amid protest banners.

The blasts took place near the city's central train station as people gathered for a march organised by leftist groups.

The attack is the deadliest ever of its kind on Turkish soil.

Prime Minister Ahmet Davutoglu has announced three days of national mourning, and said there was evidence that two suicide bombers had carried out the attacks.

President Recep Tayyip Erdogan said the attack, which comes three weeks before a re-run of June's inconclusive parliamentary elections, was an act of terrorism and was "loathsome". He has cancelled a planned visit to Turkmenistan.

The rally was demanding an end to the violence between the Kurdish separatist PKK militants and the Turkish government, and had been due to start at 12:00 local time.

The pro-Kurdish HDP party was among those attending, and it said in a statement that it believes its members were the main target of the bombings.

HDP leader Selahettin Demirtas has blamed the state for the attack and has cancelled all election rallies. Mr Demirtas angrily condemned the government as "murderers" and said it had blood on its hands.

The two explosions happened shortly after 10:00 as crowds gathered ahead of the rally. Amateur video footage showed a group of young people holding hands and singing, before the first blast.

Though no group has claimed responsibility for the deadly bombings, the focus of the investigation is the Islamic extremist group ISIS, Turkey's Prime Minister said Monday.

Prime Minister Ahmet Davutoglu told Turkish television station NTV on Monday, "We investigate Daesh (ISIS) as our No. 1 priority. There (has) been good progress toward identifying a name. That name points to an organization."