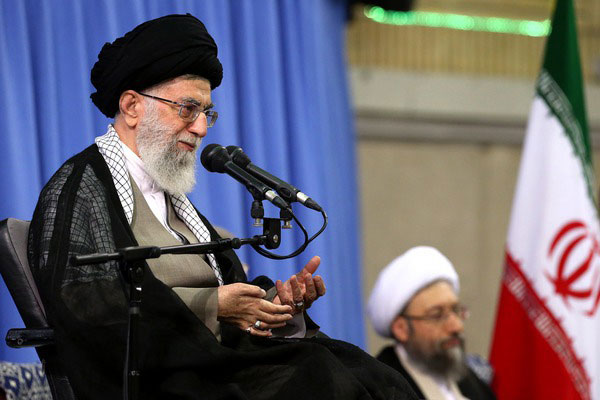 “The US is the designer and supporter of terrorism," said the Leader in a meeting with Iranian officials and ambassadors of Muslim countries in Tehran on Saturday.

Ayatollah Khamenei added that the US has formed and backed the most dangerous terrorist groups such as the ISIL Takfiri militants, saying, “It is supporting the fake terrorist Zionist regime.”

Ayatollah Khamenei further reiterated Iran's resolve to combat terrorism, saying, “Iran has strongly fought against terrorism… and will continue to do so.”

Ayatollah Khamenei then warned against the wicked policies of hegemonic powers in the region, saying some Muslim countries have been deceived into fomenting insecurity and killing people in Yemen.

The Leader also said "these wicked policies" are aimed at waging proxy wars.

Ayatollah Khamenei added that those who kill the Yemeni people are worse than infidels, saying Iran supports all oppressed nations.

Ayatollah Khamenei said the Yemenis, Bahrainis and Palestinians are oppressed nations, urging regional countries to remain vigilant vis-à-vis policies adopted by hegemonic powers aimed at making nations in the region get scared of each other.

The Leader stated that security in the Persian Gulf is beneficial to all and emphasized, “If [it] is insecure, it will be insecure for all.”

He said all countries in the Persian Gulf region shoulder the responsibility to ensure regional security.

“The US seeks its own interests and will make the [Persian Gulf] region insecure, if needed,” the Leader said.

Elsewhere in his remarks, Ayatollah Khamenei said the ignorance which existed before the advent of Islam centuries ago has been recreated with a vengeance, resulting in “unrestrained sexual promiscuity and carnal desires.”

The current situation in Muslim countries, insecurity, fratricide, and terror groups' securing their domination over the regional nations are examples of modern ignorance, which has been orchestrated by hegemonic powers led by the US.

"They (hegemonic powers) also use widespread propaganda based on lies in order to achieve their evil objectives and secure their own interests, an example of which is the Americans' claim of fighting terrorism," Ayatollah Khamenei said.

"The Islamic Republic of Iran's experience over the past 35 years has shown that the great Islamic Ummah is able to stand up to this ignorance and defeat it through two main principles of prudence and resolve," the Leader noted.

“Nations and rulers of Muslim countries! You should know that we are capable of standing against this ignorance,” Ayatollah Khamenei stated.

The Leader said regional nations are awakened and added that Islamic Awakening cannot be suppressed.

The huge power of Islam has further spread across the world "through different means," Ayatollah Khamenei underlined.