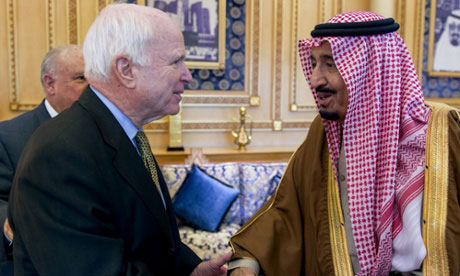 John McCain has led a delegation of US senators to Saudi Arabia, where they discussed with the Kingdom’s crown prince a Pentagon plan to arm and train the so-called moderate militants in Syria.

The Pentagon has announced it is deploying about 1,000 troops to train the Syrian militants to fight against the ISIL terrorist group.

The training program, which is expected to begin in early spring, will also include hundreds of US support personnel who will be operating at sites in Turkey, Saudi Arabia and Qatar, according to the Pentagon.

A message on the official Twitter feed for Sen. McCain said the US senators also met Saturday with Ahmad al-Jarba, the leader of the so-called Syrian National Council, as well as the commander of Saudi Arabia's training and equipment program, The Associated Press reports.

McCain, Republican of Arizona, has pressed for increased military aid to militant groups in Syria to fight a “two-front war” against both the government of President Bashar al-Assad and ISIL terrorists controlling large swaths of territory in Syria and neighboring Iraq.

In 2013, McCain held a secret meeting with Syria's militant leaders. Later it emerged that some ISIL terrorists were among the insurgents the US senator had met and taken photos with.

Critics argue that the Obama administration's plan to “train and equip” what it calls moderate Syrian militants into a proxy ground force against ISIL is foolhardy, because the US could end up arming terrorists if alliances shift in the future.

Some analysts also reject the notion that “moderate” militants exist in Syria. “Nobody in any position of expertise here thinks that there really is any significant moderate Syrian rebel force. It does not exist,” Dr. Kevin Barrett, professor of Islamic and Middle Eastern Studies, said in an interview on Saturday.

“The forces in Syria that are opposing the government with any kind of power, or any kind of will, and any kind of expertise and competence are, unfortunately, the Takfiri extremists, the same people that we are supposedly fighting, the ISIL people, and of course those groups who were actually largely created by the US and US-allied intelligence networks,” Dr. Barrett added.

“So this is a fraud and a farce. The real purpose, of course, is to undermine the Syrian government and ultimately they are aiming at regime change in Syria,” the analyst stated.

According to the United Nations, more than 200,000 people have been killed and millions displaced due to the turmoil that has gripped Syria for nearly four years.