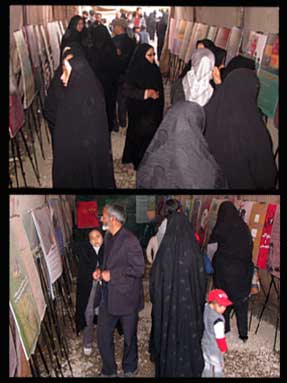 The exhibition provided the visitors with numerous posters presenting information on the Hojjatieh Society, its foundation, ideological deviations of its forerunners, its statute and the advertising and recruitment methods.

In 1950s the so-called Hojjatieh Mahdavieh Charity was set up in Tehran under the pretext of fighting with Baha’ism; however, they finally opposed the Islamic Revolution founder Ayatollah Khomeini.

Hojjatieh teaches that it’s impossible to create an Islamic Government since the reappearance of Imam Mahdi (a.j.), the last and 12th Shiite Imam which Shiite Muslims believe had disappeared but will return before the day of Judgment and fill the Earth with fairness and justice; therefore, they believe in the complete submissiveness towards tyrant rulers and dictators, as the Pahlavi dictatorship. Thus, they did not join 1970s anti-Shah revolutionaries and later in the war fronts when Saddam Hossein invaded Iran in 1980.

Following the Imam Khomeini’s speech on July 12, 1983 in which he indirectly warned the group of its ideologies, perverted Hojjatieh Society announced its dissolution through a statement fraught with intellectual and doctrinal disagreements with Imam Khomeini.

This group is considered a threat on account of their sectarian beliefs, such as a simmering enmity with Sunni Muslims, and not believing in the Wilah al-Faqih (guardianship of a virtuous jurist).