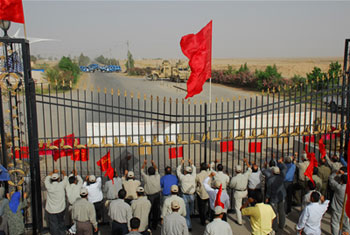 Members of the terrorist Mojahedin Khalq Organization (MKO) used to live in the camp, but an agreement reached between the United Nations and the Iraqi government in December 2011 called for their relocation to Camp Liberty (Hurriya), a former U.S. military base near Baghdad.

About 3100 members of the group have so far been relocated to Camp Liberty, but 80 have not left the camp yet.

During Tuesday’s visit, the reporters were briefed on the process of the evacuation of MKO members, who will finally be expelled from Iraq.

The MKO started its activities as a terrorist group based in Iraq in the early 1980s. In addition to the assassination of hundreds of Iranian officials and citizens, the group cooperated with Saddam Hussein’s Baathist regime in its repression of the Iraqi people.

On September 28, the U.S. State Department formally removed the MKO from its official list of terrorist organizations, a move which prompted angry response from Iran.

The U.S. made the decision under the claim that the group has renounced violence.