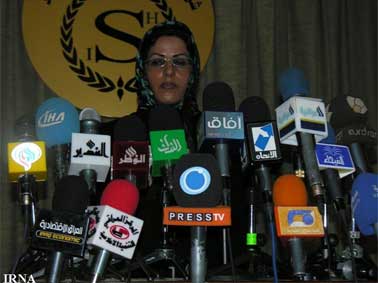 In the first part of this serialized interview, Batoul Soltani talks about the way she and her 3-month-old baby were transferred to Iraq and then she further discusses the MKO’s situation in the very first year of their arrival in Iraq. The following is a rough transcription of the interview.

Habilian: How the MKO members went to Iraq? Did they use legal ways? Did they have passport and visa or they went to Iraq illegally?

Soltani: In his dream to take power in Iran, Masoud Rajavi aligned with Iraqi dictator Saddam Hussein who was at war with Iran. He left France for Iraq in a bid to overwhelm Iran, and spent exorbitant amounts of cash to draw together his members, opponents, even the addicts and poor people from all walks of life in Iraq.

Having Saddam’s government as his supporter, Rajavi gathered troops in Iraq and in neighboring Iran by forging travel documents and making fake passports with huge sums of money given by Saddam Hussein to help him overthrow Iran and make himself the full owner of Iran’s soil. For instance, I and my husband have been transferred to Iraq by a fake Iraqi passport with names of Zahra and Abrahim.

We did not know then the ominous thoughts of them for us, and we did deem it a right way and thought that we would be able to go to a European country, such as France and to enjoy a free life and well-being. But after our arrival, (Rajavi) took all our (travel) documents and destroyed the bridges behind us in a bid to compel us to remain in Iraq and to follow his organizational orders.

Habilian: How many members were in MKO in the first years of its presence in Iraq? What was the total number of members in the last year of Saddam Hussein’s rule?

Soltani: Rajavi tried to take all the members to Iraq at all costs. The number of members in the great operations was 5000, 1000 of whom were killed in Forough Javidan (Mersad) operation.

Habilian: How was the Organization provided with Camp Ashraf? How the facilities and infrastructure constructed there?

Soltani: After the meeting of Rajavi with Tareq Aziz, the then Iraqi foreign minister, known as Peace Meeting, and in his meeting with Saddam, Masoud Rajavi was gifted with Ashraf Garrison and several other garrisons at Iran-Iraq borders and in the deserts on the frontiers which previously belonged to Saddam’s Army as well as some palaces inside Baghdad.

Ashraf Garrison known as Filq II was smaller than the present, so Rajavi said that he needed bigger land. Thus, Saddam confiscated the surrounding lands and handed them over to Rajavi.

Later, the land which was about 36 square kilometers were laid down barbed wire and tall guard towers were built inside it. Electrical wiring and strong floodlights were installed on the sides of the garrison.

A prison was built inside it and a round-the-clock patrol and security forces made there a big and isolated prison.

The Organization took out as far as it could the wretched peoples’ assets, so that they could establish foreign investments companies.

Habilian: How did the Iraqi people treat MKO?

Soltani: Since Iraqi Kurds remembered the Organization’s alignment with Saddam’s army in suppression of their uprising, they hated MKO members, and the rest of Iraqi people saw us as the members of (Saddam’s) army and they hated and feared us.

We have been prohibited to have contacts with Iraqi people even at the time of Saddam Hussein.

The Organization tried to replace this hatred and fear to relation and friendship. So, Rajavi ordered large parties to be held and thousands of Iraqi people were invited to dinner or lunch.

He spent very huge amount of money in this way. He even managed to penetrate into Iraqi society by organizing roughly 500 Iraqis with big costs. He established an Iraqi militia, and held Persian language classes inside the Garrison and paid them money.

Habilian: How did the members saw the Iraqi imposed war on Iran and their cooperation with invading forces who assaulted their territory?

Soltani: Masoud Rajavi has spent thousands of hours convincing their presence in Iraq and cooperation with aggressive Saddam. In the first step he tried to pretend that it was Iran who invaded Iraq and he instead described Saddam Hussein as a civilized and good man. He has made an angel in our minds from Saddam who was a demon. Rajavi even white-washed Saddam’s bloody hands in the massacre of Kurds, and said that Kurds are our enemies and (Iranian) regime’s accomplices.

Everything was censored in Rajavi’s Organization and we had no access to media, news, or free world. For example, he said: “we seek peace in order to prevent the killing of people, though, this is Iran which put all of their lives at stake and we want to prevent the war to stop killing people,” thereby he legitimized his collusion with aggressive forces.

Habilian: Did the relationship between the Organization and Iraqi government changed after the Iraq’s defeat in war?

Soltani: In his childish dream and of course with the help of his opportunistic personality, Rajavi attacked Iran after the defeat of Iraq in war with Iran, but he was rewarded with a strong slap in his face by Iranian people and his organization fled Iraq with 1000 casualties.

Then he said that children and wives prevented them from a good combat, so, he dismantled the families like a wolf sending the children to foreign countries and coerced wives to divorce. Thenceforth he himself married them.

He (Rajavi) had arguments with Iraqis too. He vituperated Saddam a lot, saying that his air support was not enough.

On the verge of Saddam’s overthrow, Rajavi took away Iraqi people and government’s properties, so that he got to extend the Camp (Ashraf) to the western (borders) by capturing Iraqi military forces headquarters. They also captured weapons and ammunition left around Iraqi Garrisons, and took them all to Ashraf Garrison claiming that they belonged to himself (Rajavi)!