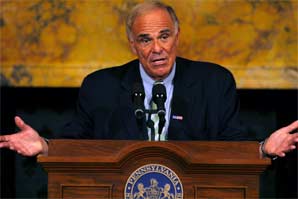 Mr. Rendell is among a bipartisan group of prominent former officials - including Cabinet-level Republicans - who have accepted payment in exchange for speeches calling for the removal of the Mujahideen-e Khalq (MEK) from the State Department’s list of Foreign Terrorist Organizations.

The MEK, also known as the People’s Mujahedin of Iran, has long called for the overthrow of the government in Tehran. The group, which engaged in terror attacks on Iranian government targets in the 1980s, has been on the terrorist list since 1997, when President Bill Clinton put it there in an attempt to improve relations with Iran.

Mr. Rendell and others argue the MEK should be removed from the list because it has not engaged in violence in more than two decades and shares a common enemy with the United States.

Mr. Rendell, who asserts that he has done nothing illegal, said that on Feb. 29 the Treasury Department's Office of Foreign Assets Control issued a subpoena seeking “transactional records about what payments we received for speaking fees.”

The subpoena was sent to the office of Thomas McGuire, an attorney with the Los Angeles-based talent agency William Morris Endeavor Entertainment, which handles all of Mr. Rendell’s speaking engagements, including those in which he has advocated on behalf of the MEK.

Calls to Mr. McGuire on Friday were not immediately returned.

A Treasury Department spokesman on Friday refused to confirm or deny the subpoena’s issuance, saying the department “does not comment on possible investigations.”

“But the MEK is a designated terrorist group, therefore U.S. persons are generally prohibited from engaging in transactions with or providing services to this group,” the spokesman said.

Mr. Rendell said the subpoena sent to his agent seeks information “about any emails, any letters, any communications involving payment that we’ve received or sent back.”

“We’re absolutely cooperating 100 percent,” he said. “I’ve instructed my agent not to hold back on any emails or any documents. There’s nothing to hide.”

Mr. Rendell, who once served as general chairman of the Democratic National Committee, is apparently the only person to be subpoenaed among a group of nearly two-dozen high-level political figures who have grown increasingly vocal in their calls for the MEK’s removal from the terrorist list.

At issue is the fate of 3,400 Iranian dissidents said to be members of the MEK. They have been living in Iraq since the Iran-Iraq war during the 1980s when they fought on the Iraqi side.

Since the U.S. occupation of Iraq in 2003, the MEK supporters lived under U.S. protection at a camp on the Iranian border. But now the Americans have left, the Iraqi government has said it will close the camp.

The European Union removed the group from its terror list in 2009.

David Cole, a professor at the Georgetown University Law Center, noted that “any group that’s on the list is also, by definition, on the Treasury Department’s list for specially designated global terrorists.”

“Anyone in the United States is prohibited from engaging in any transaction with such an entity,” he said.

While Mr. Cole stressed his personal belief that individuals have a “First Amendment right to speak out freely” for an organization like the MEK, he said that “it is a crime to engage in any transaction, which would certainly include getting paid to do public relations for them.”

Mr. Rendell and Mr. Ridge acknowledged to The Times this week that they have accepted payment in exchange for making media appearances and speeches calling for the MEK’s removal from the terrorist list.

And both men defended their actions.

“I’ve been in politics 34 years, and I can tell you right now that I would not jeopardize my reputation for any amount of money,” said Mr. Rendell. “I did my research extensively on this issue before I ever agreed to speak on it, and I am 100 percent convinced that the MEK shouldn’t be on the Foreign Terrorist Organization list.”

As to the extent to which accepting payments for such advocacy may or may not be legal, Mr. Ridge said it is a “moot question.”

Neither man would specify how much he has been paid for his speeches, although Mr. Rendell, who has traveled to Paris and Geneva five times to attend conferences calling for the MEK’s removal from the terrorist list, said that in addition to receiving a “substantial speaking fee,” his expenses have been covered in full.

A source familiar with the payments told The Times that a public figure of Mr. Rendell’s stature receives “in the ballpark” of $20,000 per speaking appearance.

But where the money actually comes from is unclear.

Mr. Rendell said payments for his speeches come from “money from citizens, both American citizens here and Iranian expats in Europe who believe in the cause.”

He stressed that he never directly accepts speaking fees, which are handled by his agent at William Morris.

Mr. Ridge, who has not been issued a subpoena from the Treasury Department, said he believes the money comes from legitimate sources but that he was not sure what they are.

“It is my understanding that there is a very large diaspora of Iranian Americans, and the diaspora is international obviously,” he said. “There’s a very significant group of American citizens and how they pledge their money and send it in and aggregate it to pay us, I don’t know.”

Trita Parsi, who heads the National Iranian America Council, argues that the money is connected to the MEK.

“That includes giving money to U.S. officials to speak on their behalf and speak in support of the MEK while pretending that the money is not coming from the MEK.”

The website of the National Iranian American Council maintains a list of groups it claims are raising money for the MEK, and Mr. Parsi claims that officials from the State Department have privately told him that the MEK sets up “shell organizations” to raise money.