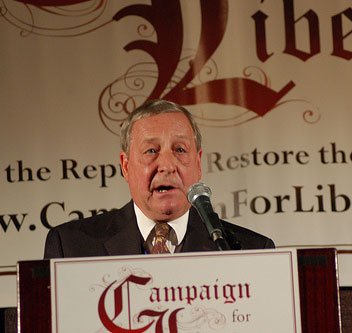 In his recent article published on Antiwar.com, Philip Giraldi emphasized the U.S. federal law prohibiting the provision of material support for terrorism and the discrimination in the execution of the law.

Giraldi made reference to Jubair Ahmad, 24, a native of Pakistan who was accused of providing material support to the Pakistan-based militant group Lashkar-e-Taiba (LeT) – a designated terrorist group by the State Department just like the Mujahedin-e Khalq (MEK, also MKO and PMOI)- as a discrimination in carrying out the law.

The former CIA officer went on to write that "the MEK has been on the State Department roster of foreign terrorist organizations since the list was established in 1997" because “it has killed six Americans in the 1970s and from its record of violence both inside and outside Iran.”

Giraldi further mentioned the MEK’s violent history, its collusion with Saddam Hussein, the cult like characteristics of the group and so on, citing a scholar who has studied them as  describing their beliefs as a “weird combination of Marxism and Islamic fundamentalism.”

“The U.S. military and the CIA have in the past recruited MEK agents to enter Iran and report on nuclear facilities,” he wrote. “Other MEK agents, recruited and trained by Israel’s Mossad intelligence agency, have recently killed a number of Iranian nuclear scientists and officials.”

He added that Mujahedin-e Khalq “appears to have ample financial resources, and it is generally believed that at least some of the money comes from Mossad.” “The MEK is able to place full-page ads in major U.S. newspapers and is also known to pay hefty speaker’s fees to major political figures who are willing to speak publicly on its behalf.”

The contributing editor to The American Conservative referred to the group’s claims regarding its efforts to regime-change in Iran and to restore democracy to the country, and described the claim as “an odd assertion” since “it itself has no internal democracy.”

“Because the MEK is a resource being used by Israel in its clandestine war against Iran, it is perhaps inevitable that many friends of Israel in the United States are campaigning vigorously to have the group removed from the terrorism list,” added Girladi.

He also pointed out that “neocons at their various think-tanks and publications as well as AIPAC all support delisting the group.” “At this moment, Secretary of State Hillary Clinton, not surprisingly, appears to be inclined to give in to the pressure and delist the MEK once it completes its departure from Camp Ashraf in Iraq, where it has been based for the past 20 years.”

“There might be some problem in arranging the move, as few countries want to take the MEK supporters, fearing that they would have to be deprogrammed from their brainwashing,” executive director of the Council for the National Interest stressed.

Some 800 Mujahedin-e Khalq terrorist organization’s elements have so far been transferred to Camp Liberty in order for the UNHCR to determine their refugee status and they will be expelled outside Iraq right from this place.