“I’ve heard from my grandmother that she never forgot reciting Quran when she was pregnant, and she completed recitation of Quran once a month. After they were born she used to recite Quran while breastfeeding her children,” says Molook- o-Sadat Beheshti, daughter of Dr. Beheshti, about his grandmother.

Later he went to primary school. When he was at the second grade of high school, he became interested in studying Islamic sciences. In 1942 Beheshti registered in Sadr School in Isfahan and started to study Islamic sciences. He studied Arab literature, Islamic Jurisprudence, logic and the basic subjects of philosophy till 1946. In 1946, he went to Qom to complete his education.

He used to teach religious sciences while he was studying. He entered university, and when he was a senior student in 1950 he moved to Tehran to learn English thoroughly. In 1951he got his BA and then went to Qom to resume his religious studies. He started teaching English language in Hakim Nezami high school. From 1951 to 1956 he was engaged in philosophical subjects and discussions seriously. He had discussions with great scholar martyr Ayatollah Mortaza Motahhari. The fruit of their discussions was “Principles of Philosophy and the Method of Realism” book.

He got married in 1952 with one of his relatives, Ezzat-o-Shari’a, daughter of Sayyed Mohammad Baqir Modarres. Modarres was a pious scholar in Isfahan.

In 1960, Mohammad Hosseini Beheshti along with a number of professors and teachers of Howze Elmieh took an unprecedented step and decided to write a plan to organize Howzeh Elmieh. The result was Haqqani, Montazerrieh, and Mahdy Montazar schools which were based on a plan and order.

Dr. Beheshti was the founder of student activism out of the country, and he based a center for Iranian students in Europe, members of which became influential figures in Islamic Revolution and later in the managing affairs of the fledgling Islamic Revolution of Iran.

He was appointed by Ayatollah Ha’eri and Ayatollah Milani as the chief mullah of the Hamburg Mosque. In March 1965 he passed through Iraq, Jordan, Syria, and Lebanon to reach Hamburg. There he began to manage and direct the mosque and formation of religious groups of the young and revealing Shah’s crimes. 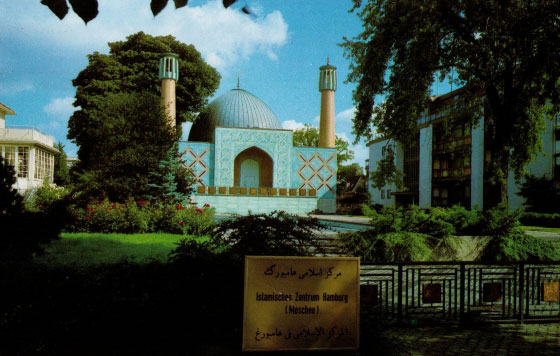 The first thing he faced in Hamburg was the lack of an Islamic organization for students. Most of the students were joined to atheist organizations and under the effect of their ideologies they have been distanced from their Islamic culture. Dr. Beheshti with some Iranian Muslims who were members of The Union of Islamic Student Associations in Europe, along with some Arab, Pakistani, Indian, and African Muslims set the ball rolling by making the core of another student organization named "Union of the Associations of Iranian Students in Europe."

Through his perseverance, Ayatollah Dr. Beheshti managed to learn German within a few months of his arrival, so that his lectures and writings were in German, and he had no problem reading German books. One of the great steps of Beheshti in Hamburg was completion of the great mosque (Jameh mosque). In May 1963, the building shell completed. 1 million marks had already been spent for the project. Upon Ayatollah Burujerdi’s death and H. Mohagheghi’s return to Iran, the construction suspended temporarily until arriving of Beheshti.

Since Beheshti’s concerns were beyond geographical, racial, and language borders, he changed the name of the mosque from “Iranian Great Mosque” to “Hamburg Islamic Center” (German: Islamisches Zentrum Hamburg) in 1965. Thus, it became a base for all Muslims to center their religious activities there. Through organized and structured religious and theological programs, Beheshti established one of the largest bases in Europe to propagate Islamic teachings. 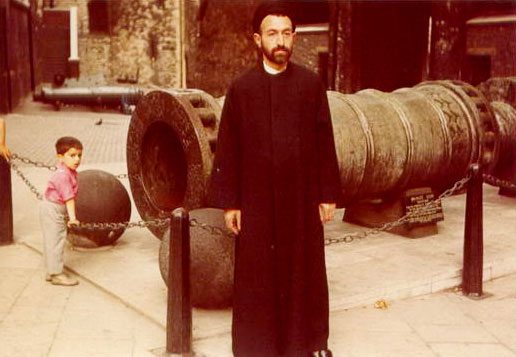 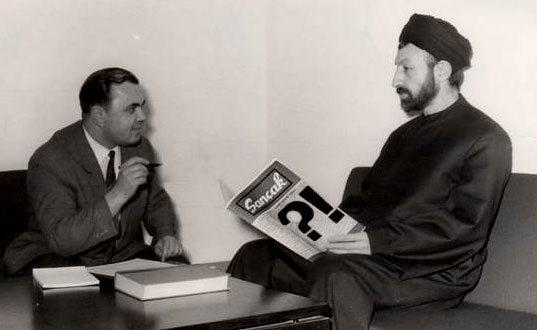 He had discussions and intellectual debates with other religions. He cooperated with Hamburg University to provide the chance for students to study oriental subjects and become more familiar with Islamic studies. He gave a series of lectures in the universities, churches and other institutions in Germany. One of his speeches (“Islam is the Religion of Thought and Choice”) was in an academic circle in Hanover, Germany. Another one was a productive lecture in Gratz, Germany with more than 150 Iranian students, at the end of which a Q&A session continued until mid-night. 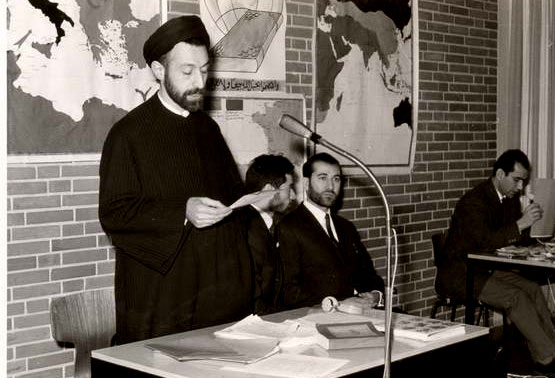 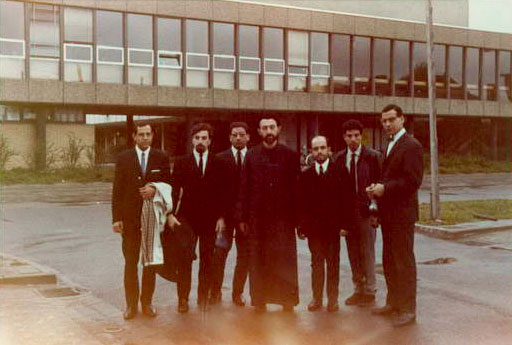 Soon he made there a place for organizing religious and Islamic activities of students. He lived in Germany for about five years, and during this time he traveled to Syria, Lebanon, Turkey, and Iraq. During a travel to Iraq in 1969, Dr. Beheshti paid a visit to Imam Khomeini.

In 1970 he came back to Iran due to his family, but Shah’s regime did not let him return to Germany. So, he resumed his activities in writing books and theoretical activities in Iran.

From 1949 on, a campaign launched for nationalization of Iran’s oil industry with the leadership of Ayatollah Kashani and Mosaddeq. Dr. Beheshti as a young cleric joined the public demonstrations in favour of the nationalization movement.

After the 1953 Iranian coup d'état (known in Iran as the 28 Mordad coup), Beheshti with some people who thought as he did in a cultural movement tried to organize revolutionaries. Imam Khomeini initiated a movement in opposition to dictatorial Pahlavi regime in 1962. Dr. Beheshti was actively present in all those events.

SAVAK, the secret police, domestic security and intelligence service established by Iran's Mohammad Reza Shah, arrested Ayatollah Mohammad Hosseini Beheshti in 1975. The pretext of arresting him was holding Quran sessions on Saturdays. Accordingly, He was being severely tortured by SAVAK.

In 1978, when anti-shah protests swept Iran, he was being arrested again for his role in those protests and demonstrations, and was transferred to Evin Prison. 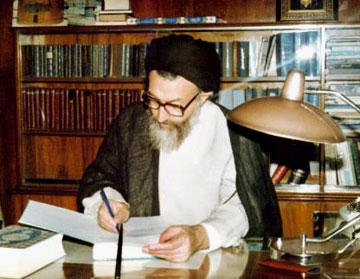 Acting under another of its erroneous assumptions, the shah's regime requested the BAATHIST GOVERNMENT OF IRAQ, in September 1978, to expel Imam Khomeini from its territory, in the hope of depriving him of his base of operations and robbing the revolution of its leadership. So, he went to France, taking up residence at the hamlet of NEAUPHLE-LE-CHATEAU near Paris in early October 1978. Martyr Beheshti along with some other revolutionaries paid a visit to Imam Khomeini that year; then, they received guidance and direction from him, and with his order the primary scheme of the revolutionary council has been drawn, thus, Ayatollah Beheshti and Ayatollah Mottahari became responsible for finding suitable people to make up the revolutionary council.

Martyr Beheshti after the Islamic Revolution of 1979

Following the Islamic Revolution, he became one of the original members of the Council of Revolution of Iran and soon its chairman. In the first post-revolutionary Iranian parliament, he led the Islamic Republic party together with Ali Akbar Hashemi Rafsanjani. (He never campaigned for the parliament though, as he was already the head of Iran's Supreme Judicial System). He was also planning to run for the presidency in the first presidential elections, but withdrew after Ayatollah Khomeini told a delegation of Rafsanjani and Khamenei that he preferred non-clerics as presidents, which led to the Islamic Republic party's endorsement of first Jalaleddin Farsi and then, inevitably, Abolhassan Banisadr.

Ayatollah Beheshti made egregious the scourges of Islamic revolution, that is, Liberalism and Hypocrisy, and his revelations led to their leaders’ disgrace. Masoud Rajavi and Abulhassan Bani-Sadr were the ringleaders of the banes of the Revolution.

Tragedy of 7th Tir and martyrdom of Beheshti and his associates 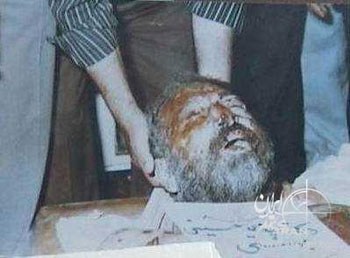 The tragedy of Tir 7th (June 28th ) was an event which led to the heart-rending martyrdom of the leader of love and devotee, Ayatollah Beheshti and 72 of pure and faithful companions of Islam and Revolution by the anti Iranian terrorist group Mujahedeen-e Khalq (MKO, MEK, PMOI).

But the terrorist elements of MKO who had sold their souls to the enemies of Iran, America in particular, never knew that such an event has also consolidated bases of the Islamic Republic of Iran’s system, which had been concluded by clergymen, and Muslim hard working people of this land.

Iran nation lost 72 innocent people in this event, and the number is the same as it was in Karbala. Iran nation is proud of presenting such persons who devoted themselves in the way of Islam and Muslims. People's enemies martyred a group who had gathered for discussing about country’s policy.

Suppose you had hostility to Dr. Beheshti, who lived and died as an oppressed man, and was like a thorn in the eyes of Islam’s enemies and in yours, so what was the reason of your hostility toward more than 70 innocent people most of them who were people’s servants and had hard opposition to the enemies of the country and nation?

Once more I congratulate and condole this big disaster to Imam Mahdi (May God hasten his reappearance), oppressed nations of the world and also Iran nation.

I am with you in sorrow and grief of dear families and I request patience from God for their dear families. God’s mercy and endless bless of nation to revolution martyrs from 15th Khordad (5 June) up to 7th Tir(28 June), and also bless to the world and Iranian oppressed nations throughout the history.

Some parts of Imam Khomeini's statement on Ayatollah Beheshti's Martyrdom and also the martyrs of Islamic Republic of Iran party while meeting some of Tehran's clergymen is as follows:

This disaster was a great loss for Islam and Muslims, specially the recent one. And the role of the United States of America in this vicious event emerged. They, who had no idea, convicted such a crime. The lawyers who were the Majlis representatives, the ministers, and from the judiciary body “Dr. Beheshti” were the enemies’ aims from the very first days of the Islamic Republic existence. And as you knew the Islamic organizations were also their aims. The Assembly of Experts was directed because the majority of its members were the committed members and among them were clergymen.

The Deliberative Assembly was directed because it was formed out of so many experts who were committed as well. The Judiciary was aimed because there were so many experts and also clergymen. This sequence has been a case and it still continues. And now we have lost so many friends and those who were interested in Islam. However; I congratulate to the Iranian people for she has raised such children and dedicated to God Almighty. She still resists and never turns a hair….