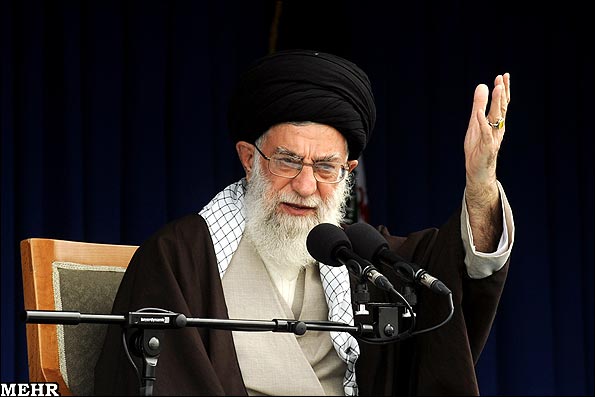 Supreme Leader of the Islamic Revolution Ayatollah Seyyed Ali Khamenei on Wednesday announced that Iran will release a hundred corroborative documents substantiating Washington's role in supporting and sponsoring terrorist activities in Iran and the region.

"We have a hundred unbeatable documents on the US role in directing terror and terrorists in Iran and the region," Ayatollah Khamenei said, addressing a large number of Iranian school and university students on the verge of November the 4th which marks the takeover of the former US embassy in Tehran by ‘Muslim Students Following Imam Khomeini's Line’ in 1979.

"By releasing these documents, we will dishonor the US and those who claim to be the advocates of human rights and campaign against terrorism among the world public opinion," he added.

Ayatollah Khamenei reiterated that Tehran has a full hand with abundant proofs, evidence and documents to prove the terrorist nature of the US.

The remarks by the Iranian Supreme Leader came after the US in a new plot against Iran alleged that Tehran wanted to assassinate the Saudi ambassador to Washington.

On October 11, US officials alleged Iran's Quds Force of the Islamic Revolution Guards Corps (IRGC) plotted to kill the Saudi ambassador to Washington by hiring assassins from a Mexican drug cartel for $1.5 million.

An Iranian-American car salesman accused of involvement in the plot pleaded not guilty in a New York court last week.

Tehran said the claim meant to tarnish its "good relations" with Saudi Arabia and also distract the world attention from anti-capitalism protests in the US.