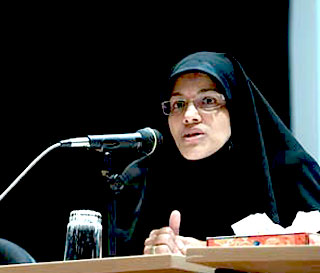 A senior Iranian legislator lashed out at the US double-standard policy on terrorism, stressing that Washington is the main supporter of state-sponsored terrorism in the world.

"Despite chanting slogans about campaign against terrorism, the US is conducting state-sponsored terrorism," Head of the parliament's Human Rights Commission Zohreh Elahian said at a gathering here in Tehran on Monday on the human rights conditions in the US.

Referring to Washington's support for terrorist groups around the world, she reiterated that the White House has adopted a double-standard policy on human rights by providing support for the anti-Iran terrorist Mojahedin-e Khalq Organization (MKO).

"The MKO is supported by them and the issue has raised a global question," she added.

Elahian also condemned the Zionist lobby for their continued attempts to remove the MKO from the list of the US terrorist groups, reminding the MKO's long record of committing thousands of crimes against the Iranian nation.

The MKO is behind a slew of assassinations and bombings inside Iran, a number of EU parliamentarians said in a letter last year in which they slammed a British court decision to remove the MKO from the British terror list. The EU officials also added that the group has no public support within Iran because of their role in helping Saddam Hussein in the Iraqi imposed war on Iran (1980-1988).

Some other ranking members of the MKO who have had a role in the assassination of a large number of Iranian citizens and officials are currently living in France.