It has been seven years since the arrest of Maryam Rajavi, the leader and so called president of the Mujahedin–e-Khalq (MKO), a foreign terrorist organization. The arrest took place at the MKO headquarters located in Auver Sur d'Oise, Paris, France on June 17th, 2003. Devoted members faced a shocking challenge as their leader was incarcerated. Some even resorted to a violent extreme political protest over the arrest of Maryam Rajavi when they set themselves ablaze. Two women died as a result. These alarming acts of self-immolation pinpoint a human tragedy in the midst of a cult mentality. The tragedy lies not only in the act itself, but in cult members’ numb emptiness and canopy of devotion for their leader, Maryam Rajavi, who used the Paris headquarters as her private sanctuary.

The 2003 arrest came as part of a raid by French police, whose government felt it was a necessary reaction to the MKO conundrum. Along with the arrest of Maryam Rajavi, the raid ended with about 160 other arrests of members and the confiscation of millions of dollars and technical materials.

After the raid, a judicial source told the la-Croix, a French newspaper, that “The intervention of security forces was conducted as part of a commission issued by the anti-terrorist judge Jean-Louice Bruguiere. It particularly results from a long investigation of financial flows which could fall within the ‘financing of terrorism.’ The raid was led by the Directorate of Territorial Surveillance (DST),” [1]

At the time, the BBC reported that Nicholas Sarkozy, now the French President, and then the Interior Minister, said [during the French Assembly on June 17, 2003] that the MKO "recently wanted to make France its support base, notably after the intervention in Iraq. We cannot accept that." [2]

Such interest and involvement by authorities was crucial for the French government because the MKO has, in order to further their agenda, conducted and participated in violent political attacks against American, Iranian and Iraqi citizens. For too long, France had been tolerating their presence. In the midst of the crackdown, the head of France's domestic intelligence service, Pierre de Bousquet de Florian, said the group was "transforming its Val d'Oise centre [near Paris] ... into an international terrorist base." [3] In a bizarre show of devotion, after the arrests took place, it became clear that members continued to be forthright and obliging in their blind commitment towards their leader. Ten members, committed senseless acts of self-immolation in an extreme response to the arrest of the leader—for the sake of the leader—not for the sake of the Iranian people. There was outrage among people who follow European news. A contributor to the French website aufeminie.com who under the name Yelann, posted an Agence France-Presse (AFP) article referred to the stories of self–immolation and found the group’s history shocking—from the immolation to the hunger strikes. She surmised they were posing as martyrs, but speculated, “Are they really doing it for their people? It seems they are extremists and fanatics. And generally these actions do no good.” [4] In 1963, with the self sacrifice of Buddhist monk Thich Quang Duc, self-immolation became spotlighted and has since become a popular tactic for gaining political attention. But historically, the act goes back thousands of years. Psychologists suggest it is the result of extreme mental distress—particularly those who have had distress from being culturally isolated from the mainstream, and programmed with a distorted ideology, and who view self-immolation as an option. The International Study for the Center of Terrorism is developing The Global Self-Immolation Events Database (GS-IED). The database, a multi-year project, seeks to identify and track the prevalence and spread of self-immolation in the context of political conflict. Preliminary results from this project will be published in late 2010/early 2011. [5] While studies are needed regarding the relationship between self-immolation and terrorism, it is important to closely examine the possibility of a disturbing predilection. Will others in the MKO French headquarters use this type of aggressive “protest” on European soil in the form of a suicide bomb or with other emblematic terrorist-type acts? 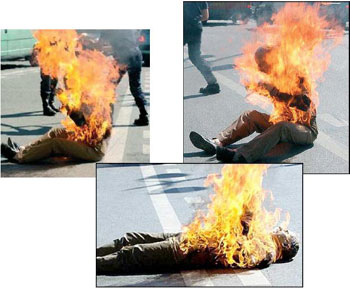 In an article titled, “Sad Spectacle” published in Iranian.com shortly after the coverage of the raid on the MKO, Babak Mazarei, who at the time was a fourth year political science major at Carleton University in Canada, and who knew the brother of one of the people who set themselves on fire, wrote an opinion in response to the tragedy. Mazarei comments, “I wrote a brief piece on the unconditional right of the Mujahedin to express themselves. I, however, do not believe that self-immolation is a legitimate means of protest. Therefore, it is only logical to write a piece that explains my reasons for holding this view, in light of the Mujahedin's extensive use of self-immolation and the resulting death of a young girl who had so much more to live for.

“The quasi-terrorism engaged in by Mujahedin of late is a testament to their ideological bankruptcy and the hypocrisy of their pro-human rights stance. I was very much angered and disheartened when I learned of the news of Neda Hassani's death, if not for the hypocrisy this act of human degradation sheds, then certainly for the loss of life. What remains are the People's Mujahedin. The record of this organization is marred by acts of violence both historically, and most recently, the materialization of protest-suicide in the form of self-immolation. In the 1970's the Mujahedin assassinated US military personnel, supported the nonsensical siege of the American embassy, and in 1990 under the operation name ‘Operation Great Bahman’ in February 2000 attacked Iranian military sites and government buildings. These acts of violence have only detracted from the credibility of the exiled opposition movement. The very simple, but nonetheless true rule of conduct ‘two wrongs do not make a right’ comes to mind.

“Finally, recently the Mujahedin have resorted to self-immolation. What is disturbing about these latest acts of non-sensical violence is the purpose for which they are being committed. It is not in pursuit of freedom for Iranians that Mojaheds are now immolating themselves, but rather in protest at the incarceration of select members of their leadership.

“This reaction only proves that People's Mujahedin are not a flexible, open organization, but rather a dogmatic entity with little hope for survival, let alone a legitimate political claim in Iran.”[6]

According to a June 25, 2003 report by New York Times correspondent Elaine Sciolino, French Counter Intelligence service prepared a classified report on the group and its activities. Sciolino details that “An Iranian opposition group operating in France that was the target of a large police operation last week had plans to attack Iranian embassies and assassinate former members working with Iranian intelligence services in Europe.” [7] The [Intelligence] report also said the group, known as the Mujahedeen Khalq, or People's Mujahedin, had discussed having their members commit suicide by setting themselves on fire to draw attention to their cause.” [8] 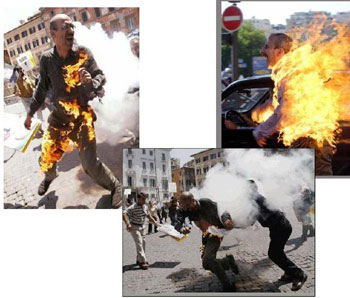 Sciolino furthered in a later New York Times article that “it was devotion to Mrs. Rajavi, who is about 50 years old, that led several of her supporters throughout Europe to set themselves on fire to protest her arrest. Although Mrs. Rajavi sent a message from jail asking her supporters to stop, former Mujahedin members said that in training camps in Iraq, self-immolation was praised as a fitting response to the possible persecution of the Rajavis.” [9]

On July 13, 2003, Elizabeth Rubin wrote an article titled “The Cult of Rajavi” for the New York Times. In this article Rubin details her encounters with MKO members she met in Camp Ashraf. Rubin concluded that the Rajavis lead a sect hated in their home country and clarified that, "While Mujahedin press releases were pouring out last month, taking undue credit for the nightly demonstrations, many antigovernment Iranians were rejoicing over the arrest of Maryam Rajavi and wondering where Massoud was hiding and why he, too, hadn't been apprehended. This past winter in Iran, when such a popular outburst among students and others was still just a dream, if you mentioned the Mujahedin, those who knew and remembered the group laughed at the notion of it spearheading a democracy movement. Instead, they said, the Rajavis, given the chance, would have been the Pol Pot of Iran. The Pentagon has seen the fatal flaw of hitching itself to volatile groups like the Islamists who fought the Soviets in Afghanistan and, more recently, the Iraqi exile groups who had no popular base at home.” [10]

As we observe the anniversary of this human tragedy where members of this cult were either ordered or felt compelled to set themselves ablaze in several European cities, let us remember the deaths of two women who created dreadful scenes—a shameful way to publicize and denounce the arrest of an alleged “resistance movement” leader. Before any more senseless deaths occur, the reality of the MKO must be re-examined not only by the French but by all by European government officials.

[5] Horgan, John, Director. "International Center for the Study of Terrorism".