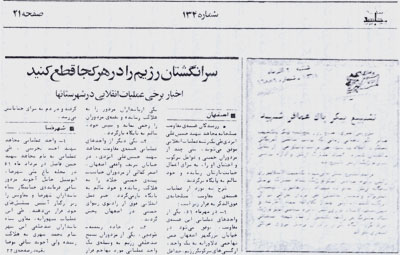 In reports appeared on their publications, the Mujahedin-e Khalq Organizations (MKO, aka MEK/PMOI) terrorists have boasted about their terror attacks against Iranian officials as well as civilians. The following are only a few samples”

1. Terror attack on a number of Army of the Guardians of the Islamic Revolution (aka IRGC) soldiers in Bozorgmehr St., Isfahan:

“In an attack on a unit of IRGC in Bozorgmehr St., Isfahan in October 1982, a unit of armed resistance group of the martyred Mujahed (an MKO member) Hussein Ali Izadi could manage to kill at least a soldier and injure other hirelings without enduring any losses.”

“Another operational unit of armed resistance group of the martyred Mujahed Hussein Ali Izadi could manage to kill Asghar Kamali, a Khomeini’s hireling, without enduring any losses.”

“An anti-people Basiji hireling was attacked to death by an operational unit in Isfahan’s Zeynabiyyeh-Towqchi Road.”