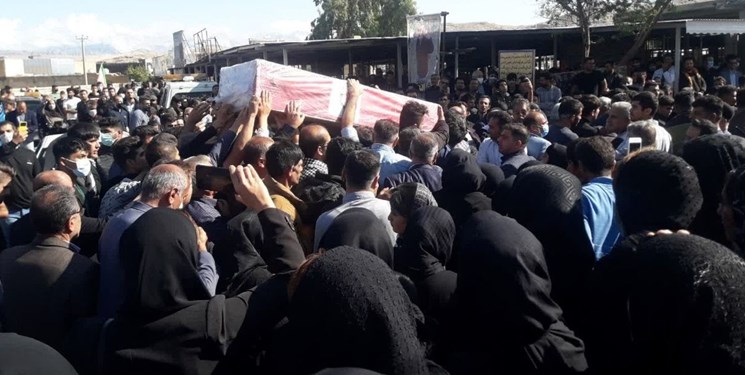 People in the city of Izeh, southwest Iran, have held a funeral procession for the victims of a terrorist attack carried out on Wednesday.

The ceremony started on Friday morning with a number of high-ranking state and military officials in attendance.

Speaking at the funeral, Vice President for Economic Affairs Mohsen Rezaei pointed out that “the three members of the terrorist group that carried out the Izeh attacks were arrested while trying to leave the country through the Maku crossing at the Turkish borders and are being brought to Ahwaz southwest of Iran.”

He assured that all the perpetrators of this crime will be arrested and punished for their wrongdoing.

Rezaei said that Iran cannot be turned into another Syria or Lebanon by carrying out violent acts similar to the ones in Shah Cheragh, Isfahan, and Izeh.

He further pointed out that “Iran’s enemies have been attentive to the recent cultural and economic reforms carried out by Tehran and want to create unrest and division among Iranians.”

But these attempts, according to Rezaei, will fail and the enemies will be defeated.

He noted that the enemies of Iran want to sever the relationship between the people, the religion, the leader of the Islamic Republic and the government. “If the [Islamic] Revolution … is connected with the people, it can be more dangerous than dozens of atomic and hydrogen bombs, and for this reason, they have resorted to sowing insecurity and are backing the protesters.”

Touching on a different note, Rezaei said “Today we are dealing with economic sanctions and slapping America and Europe in the face as we export more than one million barrels of oil.”

Seven people, including a child and a woman, lost their lives and ten more were wounded after two gunmen started shooting at people in the center of the city located in Khuzestan province on Wednesday.

Head of Khuzestan’s court of justice Ali Dehqani said that the three major elements of the terrorist attack have been detained.

Dehqani said efforts are being made to identify and arrest the other elements involved in the heinous crime.

Security officials in Khuzestan province said that two gunmen on motorbikes started shooting at people and law enforcement officers in the center of the town, using war weapons.

The terrorist act comes only three weeks after 15 pilgrims, including a woman and two children, were martyred and 19 others wounded in a terrorist attack on Shah Cheragh holy shrine in the city of Shiraz in Fars province.

The Daesh terrorist group (also known as ISIS) immediately claimed responsibility for that terrorist attack in a statement on its Telegram channel.

Iranian officials have pledged that Tehran will deliver a crushing response to the masterminds of the bloodshed.