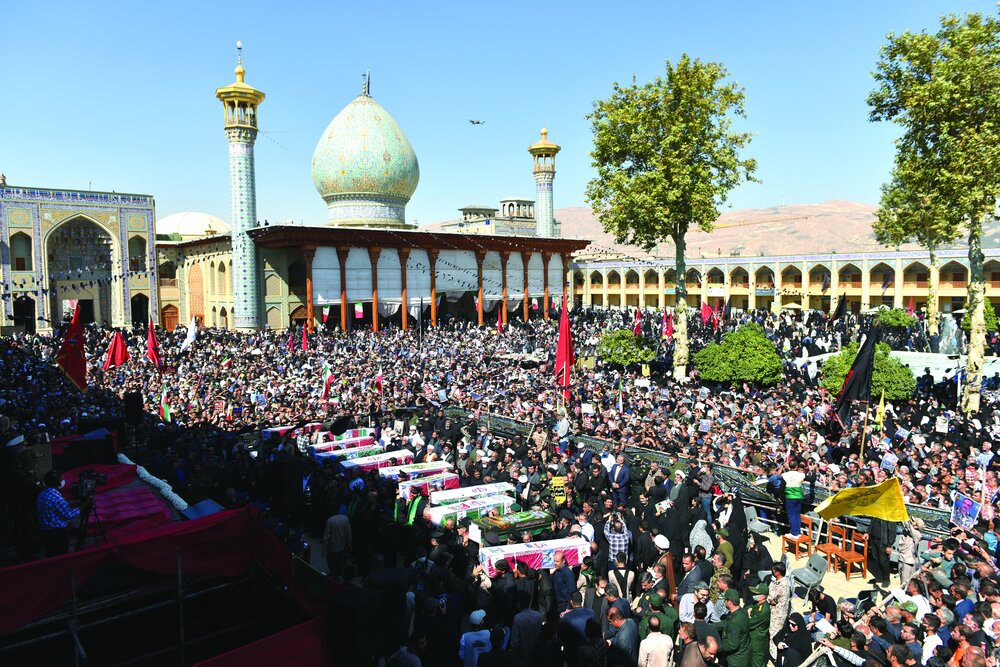 Tens of thousands of people attended a funeral procession held on Saturday morning for the victims of a terrorist attack on the holy shrine of Shah-e Cheragh in the south-central city of Shiraz.

Also, a number of political and high-ranking military officials from the Islamic Revolution Guards Corps (IRGC) and Army, Police as well as officials of Fars province participated in the ceremony.

The terrorist attack in Shiraz, the capital of Fars province which is also considered Iran’s cultural capital, shocked the Iranian citizens.

The terrorist assaulted the Shah-e Cheragh shrine at approximately 5:45 p.m. local time (1415 GMT) on Wednesday, just before the evening prayers, martyring 13 pilgrims — including a lady and three schoolchildren — and injuring at least 30 others.

The attacker opened fire indiscriminately on pilgrims within the shrine, according to the police commander of Fars province. The perpetrator was wounded and taken into custody but later succumbed to his wounds.

The vicious terror act has awakened people to the threats posed by the Takfiri terrorist groups.

“Today, people with their fervent presence (at the funeral), proved that they are united, empathetic and want order and security,” government spokesman Ali Bahadori Jahromi told Tasnim on the sidelines of the funeral ceremony.
Jahromi also said Iran will not let the perpetrators of the attack to go unpunished.

The participants held up photos of the martyrs, especially the minors, and chanted slogans against the terrorists and their supporters. They also demanded that those behind the vicious act to be brought to justice as soon as possible.

After the funeral procession in Shiraz, the bodies were flown to the northeastern city of Mashhad, which houses the shrine of the eighth Shia Imam, where mourners bade farewell to the victims.

A large number of mourners in the shrine city of Mashhad also carried the photos of the three schoolchildren who were martyred. They also held photos of the six-year-old boy Artin Seraydaran, the only survivor of a family whose parents and brother were martyred in the terrorist attack.

Also on Saturday, students from the universities of Tehran, Amir Kabir, Shahid Beheshti, Science and Technology (IUST), Alzahra, and Sharif held gatherings to mourn for the victims and sympathize with the bereaved families.

The parliamentarians representing the religious minorities issued a statement on Saturday saying the bloody attack on the shrine in Shiraz has targeted “the nation, sovereignty, religion, and national unity.”

Also on Friday, after Friday prayers, people from all walks of life took to the streets across the country, including Tehran, to condemn the savage attack on Shah-e Cheragh.

Leader of the Islamic Revolution Ayatollah Seyyed Ali Khamenei issued a message on Thursday morning offering condolences to the Iranian nation, assuring that the perpetrators of the “outrageous” crime will definitely face punishment.

The terrorist attack took place amid unrest in Iran, which began after the tragic death of Mahsa Amini around mid-September.

Speaking at a funeral ceremony in Shiraz, IRGC chief Major General Hossein Salami blamed the U.S., Britain, Saudi Arabia and Israel for the unrest in Iran.

He also warned Saudi Arabia for funding media who inflame the feelings of the Iranian youth, saying, “You cannot create anxiety for the Iranian nation and yourself live in calm.”

The London-based Iran International, which has been playing a major role in provoking unrest in Iran, is funded by Saudi Arabia. The disinformation campaign by the network is also led by Israel.

The commander also warned Washington which has openly expressed support for the rioters in Iran. “We will bury U.S. pipedreams in this land. We also warn Saudi rulers to think about the repercussions of their actions.”

Those behind unrest in Iran cannot tolerate the Islamic Republic’s political and spiritual influence across the region, and have therefore resorted to inflaming violence in the country, but to no avail, Salami asserted.

“The current conspiracy (unrest) in our country is the result of the joint policies of the United States, Britain, Saudi Arabia and the Zionist regime, which have suffered severe back-to-back defeats from the Iranian nation during the last 43 years,” General Salami pointed out.

General Salami also praised the spirit of the Iranian nation and their resistance against the coercive sanctions of the United States.

The top general went on to state that the sanctions made the Iranian nation stronger.

“When America sanctioned you, you passed it with power and destroyed their drone to prove that America cannot do a damn thing, and when the hero of the fight against terrorism, Lieutenant General Qassem Soleimani, was brutally martyred, you targeted the American base (Ain-al-Assad), which is a symbol of American power in Iraq and proved again that America cannot do a damn thing!” Salami highlighted.

Addressing the mourners in Shiraz, the IRGC chief also said “The Islamic establishment is deeply-rooted in the hearts and minds of the Iranian nation.”

He then advised the few remaining protestors in the streets, calling on them not to sell their honor to American officials.

“We say this to the few deceived youths of Iran, do you know what America's wish is for Iran and its youth? They said that we should Americanize the Iranian youth so that they can hear our voice, and America's dream for our youth is that the Iranian youth will only be killed and it doesn't matter who that youth is,” the senior commander pointed out.

According to Press TV, Salami added, “My advice to rioting students is: ‘Return to the nation, don’t play into the hands of enemies.”

He also said those who show disrespect for women wearing hijab are following the foes’ dictates.

“Those flouting hijab and harassing veiled women are following the path of enemies. This ominous plot of riots in Iran has been constructed in U.S. command rooms.

He went on to say that the United States’ image of Iran is closure of all centers, turmoil and insecurity, attack on security forces, and burning of public and private properties.

“America's wish about Iran is a needy and dependent country, and they are waiting for the country to return to a time when oil is ready to be looted and 40 thousand American advisors decide its fate. They want to take our religion, and we tell them we will take your world from you,” the IRGC commander-in-chief concluded.