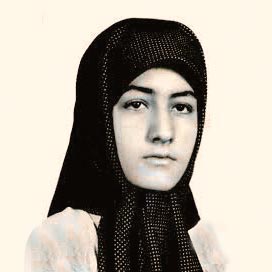 Nahid Fatehi Karjou was born on June 25, 1965, in Sanandaj, Kurdistan province. Her father was an employee of City Hall and her mother, a descendent of the Holy Prophet, was a housewife. Nahid was a kind and caring child and abandoned school after finishing primary school.

Given that the adolescence of Nahid coincided with the Iranian people’s uprising against the Pahlavi regime, she also joined the revolutionaries to further the movement of Imam Khomeini. Even as a child, she was fascinated with religious sessions and ceremonies, and often spent her free time with her friends in such meetings as well as the anti-Shah protest rallies.

As an activist in the reproduction and distribution of leaflets and announcements of Imam Khomeini, she was repeatedly beaten by SAVAK agents and her arrest warrant had been issued.

After the 1979 Islamic Revolution and the formation of the Basij volunteer force on Imam Khomeini’s order, she became a member of Basij, helping the fight against violent anti-revolutionary groups, who were active in Kurdistan Province. She played an important role in unraveling the brutalities and portraying the true face of these groups, which was quite effective in raising public awareness.

The highlighted role of Nahid did not go unnoticed by Komala terrorist group and they repeatedly threatened her. However, she paid no attention to the threats and did not feel the slightest doubt in her path.

On a cold winter day in December 1981, Nahid went to a clinic as she had a toothache. The clinic was not far from their house but a long time passed and she did not return home, which caused her mother's considerable worry. She went to the clinic and was told that her daughter had been abducted, by car, and taken to an unknown location. At the time, Nahid’s father was on the battlefield to defend the country against the Iraqi Ba’ath Party’s invasion, so she decided to search for her daughter on her own. Out of fear of the terrorist group, local Kurdish people did not dare to reveal more information about Nahid, but faced with the pleadings of the poor mother, they told her where they had last seen her.

Komala group exploited various means of torture to force her to insult Imam Khomeini and withdraw from her beliefs, but her resistance made them intensify the tortures.

Eleven months after Nahid went missing, the Iranian Revolutionary Guards found her dead body in an old school in a village of Kurdistan Province, which was used as the hub of the terrorist groups. She had been buried alive while all of her fingernails had been pulled out and her hand had been cut off.