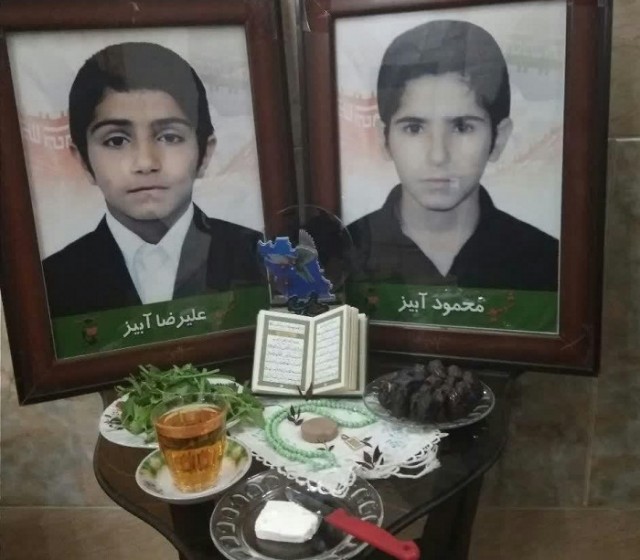 Mahmud Abiz was born as the third child of a family of seven in Zahedan. His father worked at the post office and his mother was a housewife. He finished his school studies and did such activities as wood carving along with his studies. As an intelligent boy, Mahmud managed to memorize some sections of the Quran and even fancied memorizing the entire Quran.

Alireza, the last child of the Abiz family and the younger sibling of Mahmud, was born in 1999. He was an energetic boy from the very beginning of his childhood which made him start playing sports and gymnastics. He had a good relationship with his older brother, Mahmud, spending most of his time with him. They had been well brought up that behaved respectfully toward their parents and maintained a good relationship with their relatives.

On May 28, 2009, the Abiz family vowed to slaughter a sheep and distribute its meat to the neighbors. Alireza helped his father in the distribution of the meat and Mahmud helped his mother. The evening call to prayer was approaching, so they went to the mosque to hold prayers. Mahmud and Alireza joined the lines of prayer. The evening prayer has just been held that a suicide bomber entered the mosque and blew himself up. Their father who was on his way to the mosque heard the explosion and rushed to the scene searching for his children. He came across the heartrending scene of Mahmud, 17, and Alireza, 11, being killed by the shrapnel of the bomb while embracing each other.

The suicide bomber identified as Abdul Khaliq Mullazehi had strapped explosives around his upper body and blew himself up among the worshippers killing 21 and injuring 149 others.

Following his arrest, Abdul Malik Rigi confessed that Jundallah terrorist group was led by the secret services of the US, Pakistan, Saudi Arabia, UAE, Bahrain, the UK, and Israel in order to deal a severe blow to the Islamic Republic of Iran.

During an interview, the father of Mahmud and Alireza addressed the leaders of these countries, saying “what crimes my children have committed to deserve being martyred in this way? International communities and supporters of the Jundallah must be held accountable. Because of what crime the innocent worshippers are murdered while praying.”