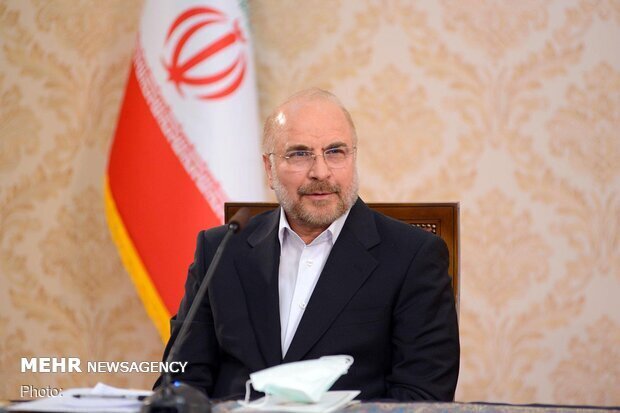 Iranian Parliament Speaker said that imposition of unilateral sanctions on the Islamic Republic of Iran is the clear example of economic terrorism.

Speaking at the Fourth Conference of the Speakers of the Neighbors of Afghanistan and Turkey under the theme of “Countering Terrorism and Strengthening Regional Ties” on Thursday, Mohammad-Bagher Ghalibaf reiterated that imposition of unilateral sanctions imposed against the Iranian people is the clear example of economic terrorism, so that terrorism knows no boundary in claiming the lives of innocent people.

Before anything, I would like to express my gratitude and appreciation to Dr. Mustafa Şentop, the esteemed Speaker of the National Assembly of the friendly and neighboring Republic of Turkey for having arranged this important meeting. I hope that this meeting provides the right ground for stronger solidarity and further strengthening of the existing ties between the regional countries.

Hereunder is the full text of speech delivered by Iranian Parliament Speaker:

This meeting is being held under circumstances where our region and by the extension the entire world are grappling with numerous political, security and economic challenges and crises. The coronavirus, Covid-19, pandemic, as one of the emerging challenges, has further engendered predisposing conditions for the spread of terrorism and violent extremism.

Terrorists take advantage of rifts, uncertainty, and economic hardship induced by covid-19 pandemic to spawn, as ever, more hatred, divisions, radicalization and recruitment of new members.

One year into the global struggle with the Covid-19 virus, the need for cohesion and public confrontation with this pandemic that has swept across all borders, divisions and dualities of poor, rich, female, male, adolescent, elderly, white, colored, literate, illiterate, developed, developing or less developed, and the like has become more visible than before.

The nature of this virus is not dissimilar to the theme of this conference. Terrorism, like covid-19, is taking the souls of innocent people while recognizing no boundaries. Christian and Muslim, old and young, male and female, all are vulnerable to the plight of terrorism, and just as the fight against covid-19 virus is not the subject or priority of one or more countries, countering terrorism in its various forms and manifestations should also become the primary concern of all countries.

Unlike covid-19, terrorism is not a new phenomenon and the threats posed by it have not only jeopardized the world peace and security, but also have killed many innocent citizens around the world, particularly in West Asia. It is quite clear and undeniable for you that the Islamic Republic of Iran has always been exposed to terrorism and therefore has invariably tried to be on the front line of combating this phenomenon.

Undoubtedly, sustaining a principled fight against terrorism and extremism as a destructive global threat requires identifying and confronting the ideological contexts and origins of the trouble-making countries that support them. As a matter of fact, some countries exploit, rather than fight, terrorism as a weapon to advance their foreign policy goals.

We, as the Speakers of Parliaments of the six countries of Turkey, China, Russia, Afghanistan, Pakistan and Iran must act in such a way that ideologues of terrorism and its supporters pay higher prices in propaganda, political and security fields, especially in the current critical situation.

Although terrorism comes in different forms, manifestations and examples, they all have a common nature, i.e. using the keyword of fear and intimidation to achieve their sinister goal. Therefore, no government or entity may distinguish between good terrorism and bad terrorism.

Some countries, with notable cases of the United States and the fake Zionist regime, have exploited terrorism and terrorist outfits as a means to achieve their goals and interests while showing no hesitation in revealing such intentions. As a prime testament, can the American targeted assassination of Martyr Lt. General Qassem Soleimani, Abu Mahdi Al-Muhandis and top Iranian nuclear scientist Martyr Dr. Fakhrizadeh be given any other title than terrorism? Assassination of two prominent Iranian and Iraqi personalities who were influential and relentless fighters against terrorist and extremist groups and played a key role in containing ISIS and the likes, as acknowledged by Westerners themselves, as well as assassinating a prominent Iranian national scientist who was in charge of developing detection kits during Covid-19 pandemic denote anything other than state-sponsored terrorism? And basically, how the principals of these assassinations can also take on the roles of defending human rights and fighting terrorism?

We have always believed that parliaments, as a complement and a booster to the efforts of governments, can strengthen and consolidate beneficial relations between nations, including playing an important role in preventing the spread of violent extremism and countering terrorism.

If the use of force, fear and pressure to achieve political goals is a key element in defining terrorism, then there is no doubt that US unilateral and oppressive sanctions in parts of the world and against the Iranian people, for a prime example, is a bold manifestation of economic terrorism. Through preventing the oppressed and the resistant people of Palestine from having fair and equal access of to the Covid-19 vaccine, the Al-Quds occupying regime has exceeded the red lines of economic terrorism to reach the borders of crimes against humanity.

Undoubtedly, the capacities of the Islamic Republic of Iran, as in the past, are available to the government as also all Afghan parties to help advance the peace process. We believe that if strengthening the sustainable security in this country is desired, it is necessary to preserve the achievements of the Afghan people, especially the Constitution.

1.      Terrorism and extremism as multifaceted phenomena are open to defeat if only a comprehensive, well-defined plan is developed and implemented in a coordinated and coherent manner by all countries exposed to this risk.

2.      We believe that in order to strengthen security, development and prosperity in the region, regional and inter-regional capacities should be better addressed. Clear and honest goals of countries and regional confidence-building measures through dialogue, understanding and the promotion of peace, stability and focus on broad dimensions of development, including human, cultural, social and economic development must be considered by all countries.

3.      Thanks to its various capacities, the Islamic Republic of Iran is ready to play a constructive role in development, prosperity and establishing a stable inter-regional security order. For example, Iran's capabilities in the field of energy production and offering a safe and short route to transfer energy carriers to global markets and having secure rail, road, air and sea transport routes can help promote inter-regional cooperation.

4.      It is necessary for us, as parliaments of friendly and neighboring countries, to make every effort in monitoring the actions of governments and facilitating their cooperation, demanding them to fulfill all their international and regional commitments, particularly in the fight against all forms of terrorism and laying a better groundwork for a global response to the Coronavirus within the context of multilateralism.

Through co-thinking and exchange of views among the participants, I hope that this meeting will be able to envisage hopeful horizons for further convergence and solidarity in the region and manage to provide practical solutions to overcome the existing challenges.

Thanks for your attention.