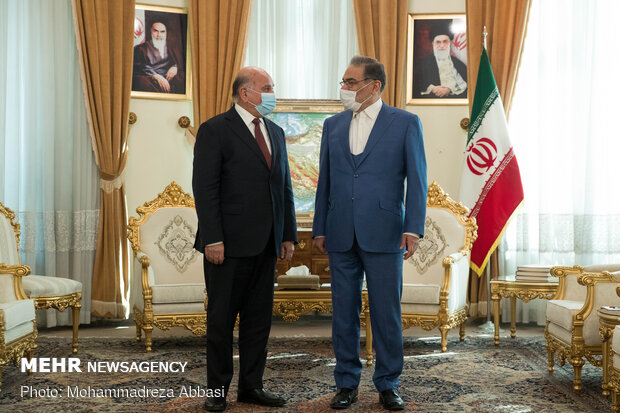 Iran's Supreme National Security Council Rear Admiral Ali Shamkhani stressed that Iran and other counter-terrorism countries will not allow Takfiri terrorism to be revived in the region.

He made the remarks in a Saturday meeting with the visiting Iraqi Foreign Minister Fuad Hussein in Tehran.

In this meeting, Rear Admiral Ali Shamkhani considered any delay in implementing the law on the expelling of foreign troops from Iraq to the detriment of the region, increasing tensions and escalating the crisis.

He also stressed the need for the joint cooperation of the regional countries to reduce tensions and hold constructive talks to reduce the existing crises.

The peace and security of Iraq today is the result of the authority of the Iraqi government, the epic struggle of the armed forces and the popular Resistance groups, therefore it must be protected, Shamkhani added.

The recent US actions to strengthen and expand the terrorist activities of ISIL and the brutal attack on the anti-terrorist forces of the Resistance, is the beginning of a new round of organized terrorism, he said and stressed that Iran and other counter-terrorism countries will not allow takfiri terrorism to be revived in the region.

Security and stability are the infrastructures of economic development and prosperity, the Iraqi Foreign Minister said, explaining, “Security is the first priority for a country like Iraq, which has been engaged in the fight against terrorism and insecurity for years.”

Elsewhere in his remarks he said, “With the continuous efforts of the financial and banking sectors and the economic institutions of Iran and Iraq, some important obstacles have been removed and the debt repayment process will soon begin based on the model agreed between the two countries.”

The Iraqi minister arrived in Tehran on Saturday for a one-day visit. This marks the Iraqi diplomat's second trip of the month to Tehran.

The chief Iraqi diplomat paid a visit to Iran in early February during which he met with Zarif, Secretary of Iran’s Supreme National Security Council Ali Shamkhani and President Hassan Rouhani.