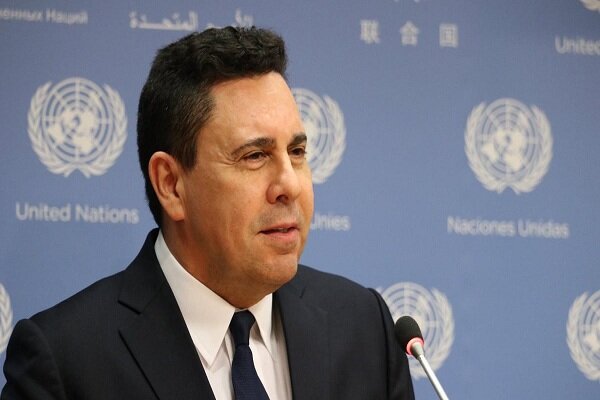 Condemning US plans to impose sanctions on Tehran and Caracas, the Permanent Representative of Venezuela to the UN said that it is a systematic plan to attack millions of lives by using economic terrorism.

The Permanent Representative of Venezuela to the UN Samuel Moncada posted a video showing US representatives openly exposing their plan to implement sanctions against both nations.

In a tweet on Tuesday, he condemned US plans to bring down the Bolivarian economy and Iran's, writing, "Amid the universal pandemic, two of Trump's henchmen flaunt their unique strategy to destroy the economies of Iran and Venezuela."

"It is a systematic plan to attack millions of lives by using economic terrorism. Here they confess their crime against humanity," he added.

Hooks recognizes that when US President Trump withdrew from the Iran nuclear deal in May 2018, it allowed them to apply high pressure to damage Iran's primary source of revenues: oil exports. "We have collapsed Iran's oil sector," he said.

Meanwhile, in another tweet, Samuel Moncada condemned that "sociopaths in the service of Trump recognize they are bringing economies down. It is a deliberate act of terrorism, a crime of extermination, and a crime against humanity. Here they set out their method of attacking the economy of millions of human beings."

In the video, Hook says that the unilateral actions, in this case, those against captains of tankers with Iranian gasoline who arrived in the Venezuelan coasts last month to provide fuel service, prove the impact of measures against the Venezuelan oil industry.