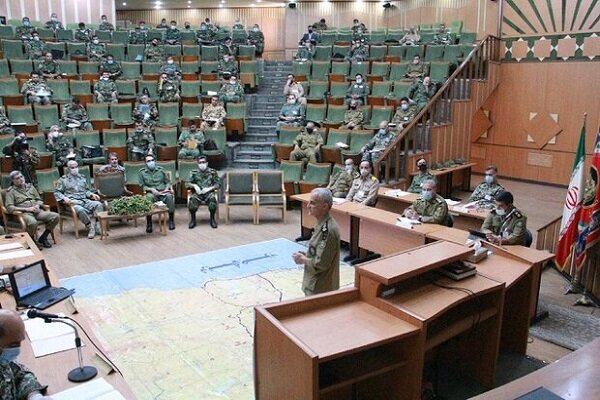 Commander of Iran’s Army University of Command and Staff Brigadier General Hossein Valivand Zamani on Sun. revealed the successful organizing of a joint military exercise on the map to counter terrorist and Takfiri groups as well as airborne operations.

This military exercise was held for a period of five days with the aim of scientific training of a joint ground, defense, air, and maritime operation to the students at AJA University of Command and Staff [DAFOOS], he said.

Promoting skills of combat, training, increasing self-confidence, and applying tactical and staffing principles by implementing operational principles by students in a joint and collaborative activity have been cited as the main objectives of the military exercise so that they can practice the real combat in the situations created, he added.

Through organizing such military exercises, students at the University of Command and Staff can get familiarized with the way of countering terrorist and Takfiri groups in order to improve their defensive skills in applying the new methods of combat, Brigadier General Valivand stressed.

Elsewhere in his remarks, he emphasized the importance of organizing such military exercises and its effect in dealing with the possible threats and added, “considering that each country should have certain tactics, policies and measures to counter threats, these joint military exercise on the map can promote our defense strategies in dealing with any possible threat.”

Students participated in this military exercise via video conference due to the outbreak of the novel coronavirus, also known as COVID-19.