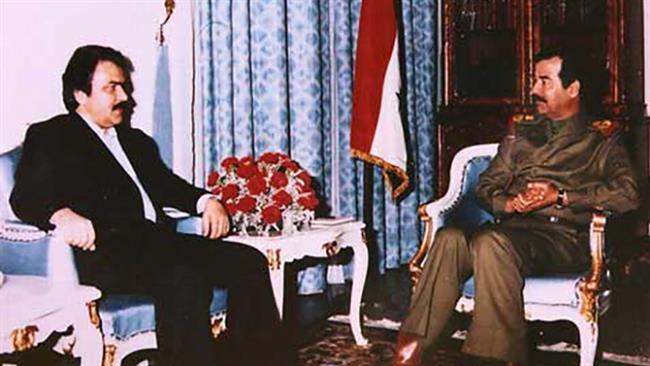 Iranian Foreign Minister Mohammad Javad Zarif on Thursday accused US President Donald Trump of making threats that were cheered on by "Saddam's terrorists".
The chief Iranian diplomat was referring to the formerly US-designated terrorist group Mujahideen-e Khalq (MEK), an Iranian opposition group that was allied with the late Iraqi autocrat Saddam Hussein.
It all started on Wednesday, when Trump said in a tweet that he ordered the US Navy to "shoot down and destroy" any Iranian gunboats that harass American ships.
The US president's post was celebrated by an MEK-linked account. Trump retweeted that response, taking a dig at the presumptive Democratic nominee, former vice president Joe Biden.
"The mullahs' regime ruling Iran harasses UN [sic] Navy ships for propaganda purposes," Heshmat Alavi, a popular MEK-linked Twitter account, responded to Trump's post.
"Thank you, President Trump, for reminding this regime that the Obama years are gone."
In turn, Trump shared Alavi's post commenting: "Sleepy Joe thought this was OK. Not me!"
The case of Heshmat Alavi
Alavi, who has penned opinion pieces in several major international publications, has been the subject of an ongoing controversy since the Intercept published a story last year alleging that he is not a real person, but a "propaganda operation" run by the MEK.
The report cited former members of the Iranian opposition group as saying that a group of MEK members in Albania manage Alavi's persona.
Twitter briefly suspended the account after the publication of the Intercept story. Alavi had pushed back against the story, saying that it was a "highly biased article full of lies".
He did acknowledge that he supports the MEK and does not write under his real name.
"No, I will never reveal my real identity or photograph. Not as long as the mullahs' regime is in power," Alavi wrote in a blogpost in June 2019.
"No activist in his/her right mind would do so. That would place all of my family, friends and myself, both inside & outside of Iran, in complete danger."
Fake or not, Alavi's voice was amplified by the president of the United States on Wednesday, who shared the controversial account's content with his more than 78 million followers.
Critics were quick to call out Trump for promoting the MEK-affiliated account.
"Behold Donald Trump's open coordination with an Iranian terrorist organization. The person he retweets does not exist, the account is run by six people in the MEK's terrorist base in Albania," tweeted Trita Parsi, executive vice president of the Quincy Institute for Responsible Statecraft, an anti-war think-tank in Washington.
"Yes, the president of the United states [sic] is retweeting a terrorist account."
The MEK has a long history of violent attacks in Iran, and until 2012 it was considered a terrorist organisation by the United States.
'More of a cult'
Ryan Costello, policy director at the National Iranian American Council (NIAC), a Washington-based group that opposes war with Iran, said the US administration's ties to the MEK were "deeply concerning".
"This is still a group that's more of a cult than an advocacy organisation or a legitimate organisation... To think this is an organisation that is influencing the president and the administration should be cause for concern," Costello told Middle East Eye.
The group has managed to garner strong relations with key members of both major parties in Congress. Trump's personal lawyer Rudy Giuliani and his former security adviser John Bolton are also ardent supporters and have spoken at the group's events for hefty fees.
The White House did not return MEE's request for comment.
Detractors also accuse the group of being a "totalitarian cult" centred around its leader, Maryam Rajavi. Moreover, the MEK is tainted by its past ties to Iraq's Hussein, who is loathed as a brutal figure in both Iran and the United States.
But MEK supporters dismiss such accusations, insisting that it is the most organised opposition group calling for a democracy in Iran.

By Ali Harb in Washington