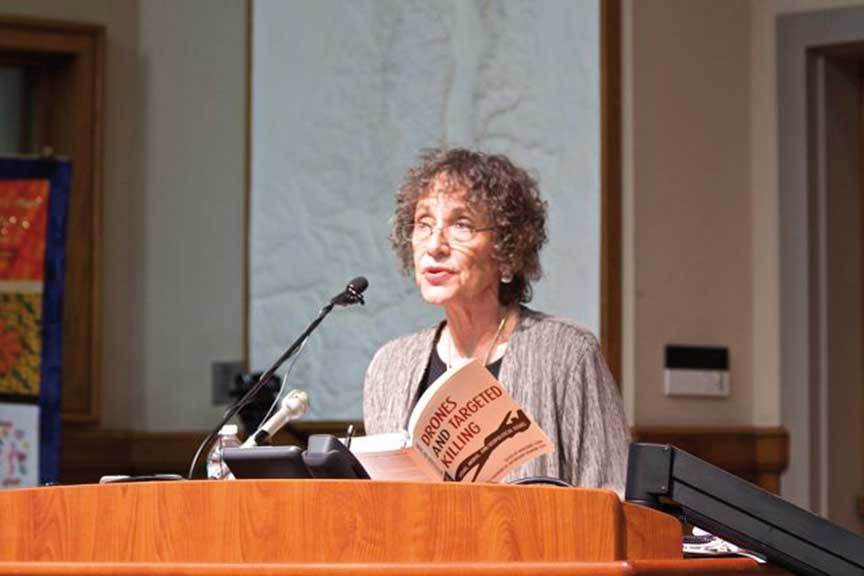 Marjorie Cohn is emerita professor of law at Thomas Jefferson School of Law, former president of the National Lawyers Guild, deputy secretary general of the International Association of Democratic Lawyers and a member of the advisory board of Veterans for Peace. Dr. Cohn regularly contributes to antiwar web sites such as Truthout, Truthdig and Consortium News. Her most recent book is Drones and Targeted Killing: Legal, Moral, and Geopolitical Issues. Given Cohn’s expertise in US State terrorism, and in particular the approach adopted by recent US presidents to use drones to kill their opponents in other countries, we reached out to her to discuss the legal dimensions of the assassination of Iranian Major General Qasem Soleimani. What follows is a transcript of Habililian’s interview with this distinguished professor and international lawyer which is provided to the contacts.

Habilian: What international law say about assassinating a country's senior military officer?
Professor Cohn: The United Nations Charter requires that all member states settle their disputes peacefully using diplomacy. A state cannot use military force against another state except in self-defense or with approval of the UN Security Council. Since Iran had not mounted an armed attack on the United States, the U.S. could not claim that it killed Qassim Soleimani in self-defense. And the Security Council did not give its approval. Moreover, under the Caroline Case, the need for self-defense must be “instant, overwhelming, leaving no choice of means and no moment for deliberation.” Since there was no evidence that Iran was planning an imminent attack on the United States or U.S. troops, the assassination of Soleimani did not satisfy the requirements of the Caroline Case. It was thus illegal under international law.

Habilian: Did Trump have the domestic legal authority to assassinate Iranian General?
Professor Cohn: The assassination of Soleimani violated the U.S. War Powers Resolution. The Resolution allows the president to introduce U.S. armed forces into hostilities or imminent hostilities only after Congress has declared war, or in “a national emergency created by attack upon the United States, its territories or possessions, or its armed forces,” or when there is “specific statutory authorization,” like an Authorization for Use of Military Force (AUMF).
Iran had not attacked the U.S. or its armed forces and Congress had not declared war on Iran or authorized the use of U.S. force against Iranian targets.
Thus, the assassination of Soleimani did not comply with the War Powers Resolution.

Habilian: In the Pentagon's statement released after the strike, it is said that the targeting of General Soleimani came by order of the US president as a way of "deterring future Iranian attack plans". In your opinion, does Trump’s assassination order constitute lawful self-defense?
Professor Cohn: Deterrence does not satisfy the requirement for self-defense under the U.N. Charter. The assassination of Soleimani was not conducted in response to an armed attack by Iran on the United States. It therefore did not constitute lawful self-defense. Moreover, deterrence is not imminence. So under the Caroline Case, the assassination was not lawful either.

Habilian: What's your opinion about Mike Pence’s attempt to link General Soleimani to 9/11
Professor Cohn: George W. Bush falsely tried to conflate Saddam Hussein with the 9/11 attacks to justify his illegal war on Iraq. Likewise, there was no evidence linking Soleimani to the 9/11 attacks. Thus, the 2001 Authorization for the Use of Military Force, that allowed the president to use force against those who planned and aided in the 9/11 attacks, could not be used to justify the assassination of Soleimani.

Habilian: Could Trump be prosecuted for conducting war crime?
Professor Cohn: Under the Rome Statute for the International Criminal Court, Trump perpetrated the crime of aggression against Iran. There are two bases for prosecuting Trump for the crime of aggression:
First, aggression is “bombardment by the armed forces of a State against the territory of another State or the use of any weapons by a State against the territory of another State.” U.S. armed forces conducted a bombing attack in Iraq.
Second, aggression is, “The use of armed forces of one State which are within the territory of another State with the agreement of the receiving State, in contravention of the conditions provided for in the agreement or any extension of their presence in such territory beyond the termination of the agreement.” The Iraqi government stated that the drone strike that killed Soleimani violated the terms of the agreement for stationing U.S. troops in Iraq.

Habilian:  Will assassinating General Soleimani help Trump to save his presidency?
Professor Cohn: It remains to be seen but since most Americans oppose the way Trump is handling the Iran situation, the assassination may not help Trump.