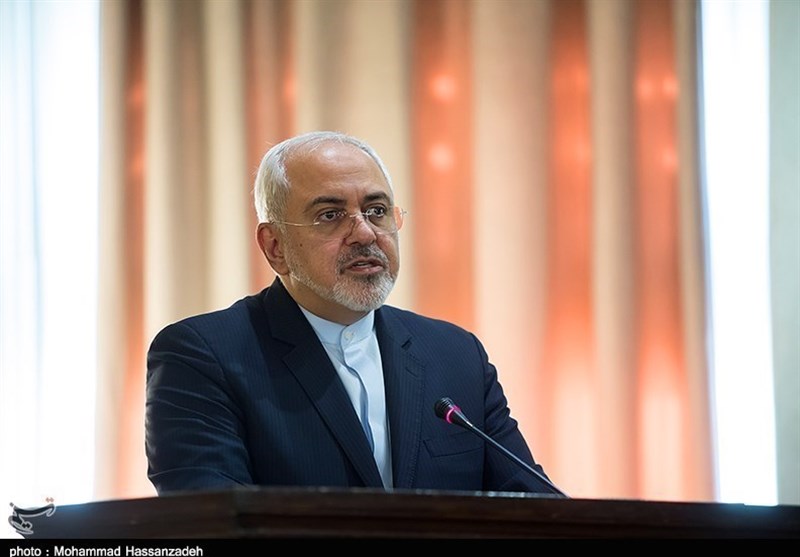 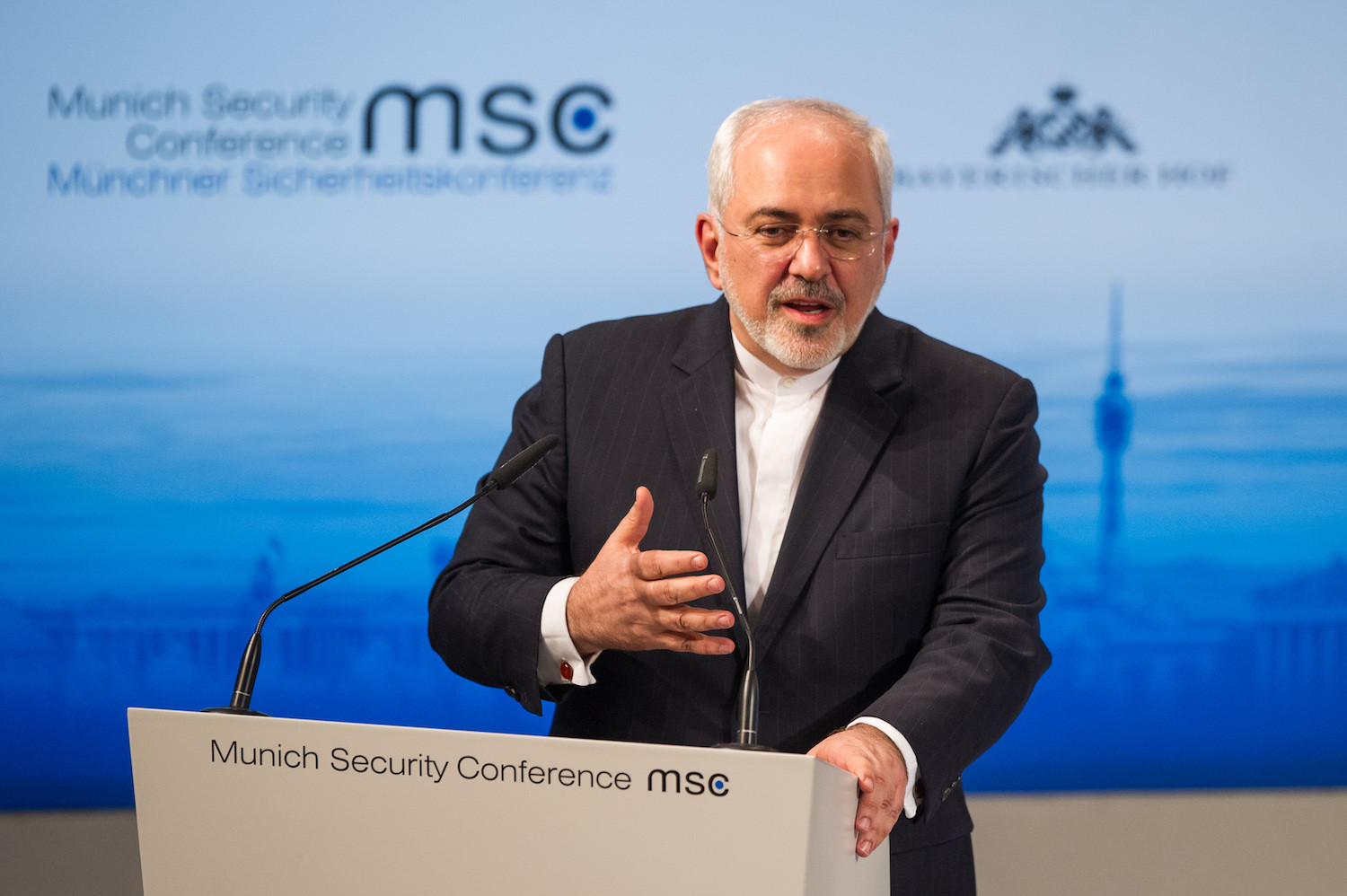 Iranian Foreign Minister Zarif said the US’ “terroristic assassination” of commander of IRGC Quds Force Lt. Gen. Qasem Soleimani has opened the gates to an “ugly course of action” which might “sooner or later come to haunt itself across the globe.”

Opening his speech with a tribute to Lt. Gen. Qasem Soleimani, commander of IRGC Quds Force, Zarif said the US’s “terroristic assassination” of one of the Iranian top military commanders has “opened the gates to an ugly course of action which might, sooner or later, come to haunt itself across the globe.”

He said the assassination was not a mere “attack on Iraq’s national sovereignty or just the cowardly, brutal assassination of a proud Iranian general. In fact, one of the pillars of striving for security in this area, fraught with various plots, was targeted.”

He added that Trump’s order for the assassination was a “huge gamble,” and lamented the fact that the Middle East region has been embroiled in endless wars, extremism and violence caused by the US continuous aggressions.

The full text of Zarif’s opening speech is as follows:

At the outset, I would like to seize the opportunity to welcome all of you to Tehran, to IPIS, and to the building that will henceforth be re-named after our proud Martyr General Qassem Soleimani. I also express my deep gratitude to the IPIS colleagues for having organized the “Tehran Dialogue Forum” in these extremely critical days and circumstances in our region. We have gathered here to engage in synergistic exchange of views towards exploring practical ways out of the perilous situation dominated by the paradigm of aggression, extremism and violence. I would like to share with you, as thinkers and peace-lovers, a number of reflections and ideas.

Before turning to the substance of my remarks on the situation before us, let me say, it is indeed difficult for me to address this august assembly just four days after having lost, to the criminal and murderous state terrorism of the United States, a courageous, wise, rational, and visionary friend and colleague of mine, Martyr General Qassem Soleimani. A great man who embarked on a life-long struggle to make the world a better and safer place for us has now departed for the Heavens: slain at the hands of the most vicious people. The Iranian people, along with every other independence-seeking and anti-colonialist individual in the region is mourning this huge loss. The United States' terroristic assassination of one of the Iranian top military commanders has in fact opened the gates to an ugly course of action which might, sooner or later, come to haunt itself across the globe.

The U.S. has proved, once again, to everybody, its total, blatant disregard for the jus cogens in international law as well as for universally-recognized rights and immunities. This is the same schizophrenic approach that repugnantly threatens, in contravention of international law, to strike Iran’s cultural sites which are part of the shared human cultural and civilizational heritage.

Martyr General Qassem Soleimani represented the voice of independence-seeking struggles of a region that has been afflicted with the unfortunate accumulation of multi-layered problems and difficulties emanating from the insatiable lust of international masters of money and might and their foolish, opportunistic allies. What transpired at the early hours of January 3rd was not a mere attack on Iraq’s national sovereignty or just the cowardly, brutal assassination of a proud Iranian general. In fact, one of the pillars of striving for security in this area, fraught with various plots, was targeted. Terroristic, extremist groups, from Al-Qaida to ISIS and Al-Nusra Front – the very brainchildren of the U.S. and its regional servants – are those who view commanders like Soleimani as their greatest enemy.

It comes as no surprise that the unmannered and tactless US President committed a strategic blunder, driven by folly and arrogance, in ordering the assassination of the great conqueror of battles against terrorism and extremism, and the most successful “peace-making general” of the region in recent decades. This time, though, he has made a huge gamble, and must know that the Divine promise is true; that the righteousness will be the ultimate victor, and that “Allah is dominant in His affairs.”

One the most important problems in the region surrounding us comes from the misconceptions and miscalculations that have profoundly impacted the regional equations. I have frequently stressed that this cognitive disorder and the miscalculations emanating from it constitute one of the most endemic roots of the current crisis in the region.

The U.S. has demonstrated, for the umpteenth time, how it can take dangerous steps, emanating from its miscalculations and misperceptions of the domestic situation in Iran and of the region, to wreak insecurity in the world and, ultimately in their own country. The depth of grief and bereavement among the nations in the region and the Muslim world at large, and in particular the unprecedented popular funeral processions held in both Iraq and Iran for Martyr General Soleimani and his life-long comrades, including Martyr Abu Mahdi al-Muhandis, are telling signs of the profundity of the U.S. erroneous perceptions and calculations vis-à-vis Iran and the region. Just note the statistics: the US foreign policy expenditures in West Asia under the current administration has increased by 1 trillion USD, reaching a total of 8 trillion USD. The figure, however, does not reflect at all the incalculable value of the bloodshed and the innocent lives perished due to such miscalculations.

It is a fact of history that many US presidents, and now Donald Trump, have set on fire a region and even the entire world for the short-sighted goals in their domestic policies. It is unfortunate that nowadays we are facing the biggest historical lie ever; that the U.S., notwithstanding a long trail of massacres and bloodshed, pretends to pursue the collective good and peace and security in the region and in the world.

Our region has been embroiled in endless wars, extremism and violence caused by the US continuous aggressions as well as by the conflicts in recent years. Resort to war, considered an exception in international relations, has unfortunately become a norm and rule in the region due to the attitude and conduct of the U.S. and its followers. This is a vicious circle that must be broken by the regional actors and all those committed to peace, quiet, and stability.

Unfortunately, cognitive dissonance and miscalculations are not peculiar to the U.S only. Some of the US allies and like-minded states in the region, due to their absolute dependence on foreigners and purchasing legitimacy and security from without, have also adopted and pursued the same wrong, calamitous path; a path that has led to divisions and conflicts more visible today than ever before – from battle of norms to the clash of strategies.

What is more deplorable is that these ongoing regional divisions and conflicts have in fact created the breathing space for malignant forces within and without the region to strengthen and expand their illegitimate and illegal military presence in the region through fabricating trumped-up threats and artificial securitization scenarios. The most important and visible consequence of such ploys is to be seen in the endless pain and suffering the oppressed nations in the region continue to endure; from Afghanistan and Iraq to Syria and Libya. The other side of these devastating and incendiary policies concerns the sale of destructive arms to the region, in the order of hundreds of billions of dollars, equal to one fourth of the total global arms sales.

The disorders and shortcomings we witness today in the region, from a dire lack of “inter-regional dialogue” to a want of institutionalized, structural interactions, unmistakably reveal the fact that regional conditions are not moving in the direction of improvement. For some, the accumulation and intensification of the crises might mean that the region has arrived at a practical and even conceptual impasse.

As Minister of Foreign Affairs of the Islamic Republic of Iran, I deeply believe that although solutions to the current crises might far-fetched, they are, in actual fact, “within reach and accessible.” To bring what appears to be “far" close and make it "accessible," in addition to requisite political will and mustering of regional capabilities, we need a paradigm shift. The needed shift requires both courage as well as collective efforts.

The paradigm currently imposed on our region – which is reproduced by some in the region, wittingly or otherwise - is premised on the presumption that American arms and war bring security. In my conviction, what can bring security to the vast geography of the West Asia and the Persian Gulf and can create lasting peace in this region lies in enhancing inter-regional solidarity, shared understanding, and cooperative relations.

Shared understanding is the cornerstone of any meaningful movement in this region – which requires, in the first place, dialogue. What this region needs now, more than ever before, is inclusive, comprehensive intra-regional dialogue. This lies at the foundation of the initiative Iran has been pursuing for years within the UN framework. This initiative, currently known as HOPE - Hormuz Peace Endeavor – was introduced at the UN General Assembly last year by the honorable President of the Islamic Republic of Iran.

This initiative, taking into account the regional realities and based on the solid belief that building of a new, inclusive architecture free from the language of aggression and threat as the colonial heritage in the region, is not only “viable,” but it is in fact the “most imperative" task everyone in the region should undertake. This is the very logic and language detested by masters of money and might; those who seek their interests in war and division, and hence, spare no efforts to preclude it, through recourse to terror and assassination.

The path chosen by the U.S. for itself and the region is characterized by insecurity, war and bloodshed. But, Iran, as the unified voice arising from the heart of every child of this ancient and proud land, heralds peace and quiet for the region.

The ultimate expulsion of the U.S. from West Asia is the doomed fate of Washington's unbridled exploitation of the tools of war, sanctions, and assassination. The U.S. will receive the definitive resolute response to its brazen, criminal act in a place and at a time it hurts most. However, I would like to send this message to the region, in my capacity as the Minister of Foreign Affairs, that Iran will continue to serve as the anchor of peace and security and also as the axis of regional development. The Islamic Republic of Iran pursues a proactive and solution-oriented regional approach and policy. All regional countries should also serve as an axis of solution to various regional cases and situations.

It goes without saying that this path requires the partnership of all neighbors and the imperative of taking clear steps by everybody in the region. Security cannot be realized through “hurling stones at the neighbor’s house." We believe in security for all.

Now we are standing at an important juncture in the history of the region and the world at large. As countries situated around the Strait of Hormuz, we – all of us, let me underline - should abandon the paradigm of elimination and antagonism premised on the illusion of purchasing security and development from without. This paradigm has not but brought war and turbulence to our region and to the world. We should instead opt for and subscribe to a paradigm of regional inclusivity and synergy – as the only realistic way out of the current cycle of perpetuating crises – so that we can proceed towards a thriving, prosperous future with promising prospects for future generations.

And to conclude, let me say, that this will indeed be the actual realization of the greatest wish and aspiration of my martyred brother, General Qassem Soleimani.