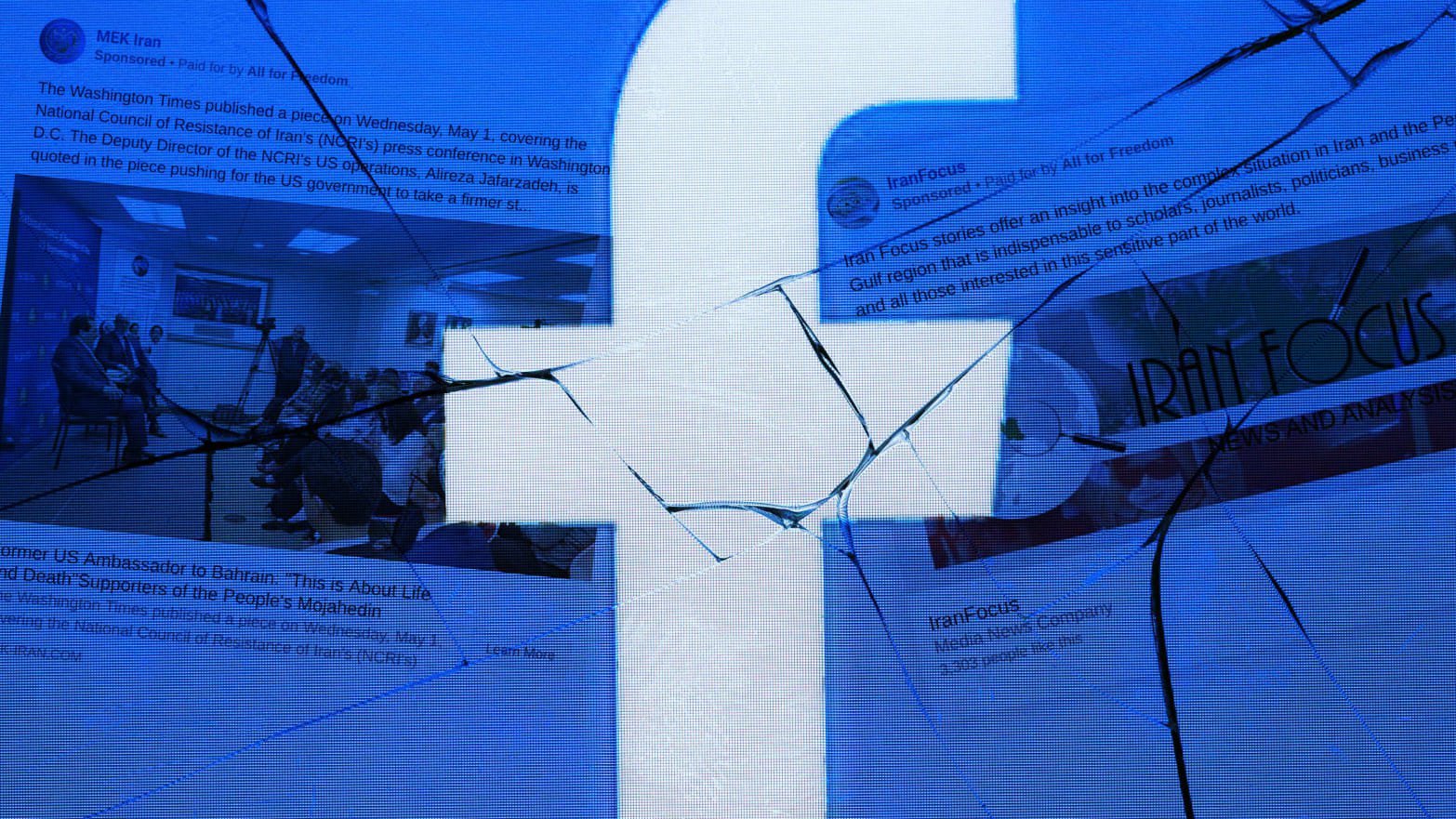 The Facebook pages appear to be a part of a larger effort to sway U.S. opinion on policy toward Iran.

As U.S. policymakers weigh responses to increasing Iranian aggression in the Persian Gulf, a German national based in a small neighborhood of northwest London is quietly financing an ad campaign designed to stoke a more forceful U.S. policy toward Tehran.

The person behind the campaign, pushed in part under the guise of independent news and analysis, is Soheila Aligholi Mayelzadeh, who’s previously identified herself as a lobbyist for the National Council of Resistance of Iran, a leading opposition group in the country. Since March, a company owned by Mayelzadeh has bought dozens of Facebook ads targeted at users in the United States promoting a more aggressive confrontation with Iran.

Those paid ads have run on two Facebook pages. One is the official page of the People’s Mujahedin of Iran, a militant Marxist opposition group in the country with deep ties to the NCRI, and commonly known by its Farsi acronym, MEK. The other is the page of an ostensibly independent news organization called Iran Focus.

The previously unreported advertising campaign shows how some leading opponents of the present Iranian government are attempting to capitalize on U.S. momentum for a more aggressive policy toward Iran. And it reveals efforts to present that lobbying campaign not as the work of an organized political bloc but as supposedly independent foreign policy analysis.

Both Iran and Iraq consider the MEK a terrorist group. It was previously designated as such by the U.S., United Kingdom, Canada, and the European Union, all of which have since removed the group from their respective lists of foreign terrorist organizations. The U.S. did so in September 2012.

Since then, the MEK has won some critical U.S. allies in its push for regime change in Iran, most notably John Bolton, President Donald Trump’s national security adviser. “There is a viable opposition to the rule of the ayatollahs,” Bolton told an annual MEK gathering in Paris in 2017. “And that opposition is centered in this room today.”

Bolton is currently one of the leading advocates in the Trump administration for a more aggressive confrontation with Iran, putting him squarely in line with the immediate U.S. policy objectives of the MEK and the NCRI, widely considered to be the MEK’s de facto political arm. The NCRI has pressed its case with other Trumpworld figures as well, according to foreign agent filings with the Justice Department, including Rudy Giuliani and Newt Gingrich.

The Facebook pages for the MEK and Iran Focus appear to be a part of that larger effort to sway U.S. opinions on policy toward Iran.

Both pages began running ads on the same day in late March, according to Facebook’s archive of political ads. They’ve run dozens of ads since then, and while neither page is hugely popular—fewer than 4,000 “likes” between them—and the sums spent on those ads have been relatively small, about $7,500 total, they’ve managed to reach between 500,000 and 1.4 million U.S. Facebook users over the last two months.

All of the money for those ads, according to Facebook’s archive, has come from a single company called All for Freedom. The London-based company’s website says it “work[s] with charities and non-profit organisations to help them with events management and other services for them to achieve their charitable and humanitarian activities and goals.”

Corporate records in the U.K. list Mayelzadeh, a German national, as All for Freedom’s only officer. And she has ties to the NCRI going back decades. In 1995, Mayelzadeh donated to the campaign of former Rep. Jim Traficant (D-OH). She listed an address in the Virginia suburbs of DC, and her occupation as a “lobbyest” [sic] for the National Council of Resistance.

Attempts to reach Mayelzadeh were not successful. An email sent to the address listed on All for Freedom’s website was not returned.

The majority of the Facebook ads that the company has financed have simply promoted the pages and websites of the MEK and Iran Focus, all of which take a hard line on U.S. policy towards Tehran. Some ads, though, promote specific bits of content that advance the Iranian opposition’s views on the matter.

One recent ad on the MEK page recapped a NCRI press conference in early May and subsequent coverage of the event by the Washington Times. At the press conference, a top NCRI official called on the U.S. to designate Iran’s intelligence service as a foreign terrorist organization and generally to “take a firmer stance against the bloody and violent Iranian regime.”

The event also got a positive write-up in Iran Focus, which describes itself as “an independent non-profit news service provider that focuses on events in Iran, Iraq and the Middle East with a network of specialists.”

Its coverage of late has leaned heavily on the U.S. to step up a military confrontation with the Iranian government. “Iran seems to understand only the language, the language of force,” one recent piece declared. “They speak the universal language of bullies. And we all know what happens when you stand up to a bully… they back down.” Another piece last week said the Iranian government has “benefited from impunity for far too long and it must face the consequences. Whatever they may be.”

The website appears to be less independent than it claims. It’s favorably covered the MEK and NCRI for years, but it appears to have some overt ties as well. According to domain registration data, the Iran Focus website was maintained by Mohammad Hanif Jazayeri, whom the NCRI website identifies as a spokesperson, until at least 2015, when the site anonymized that registration information.

Neither Iran Focus nor Jazayeri responded to questions about the news outlet’s relationship with the NCRI and MEK.