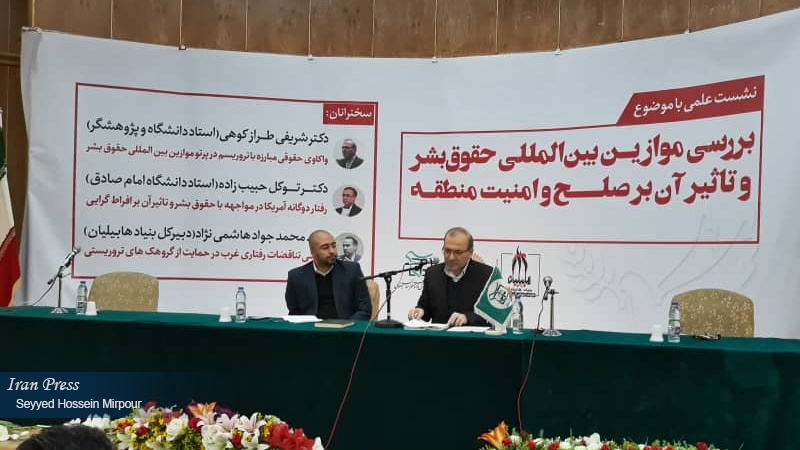 An international conference on Human Rights issues and their effects on achieving sustainable peace and development in the region was held in Mashhad city, Northeast Iran.

Iran Press/Iran news: Human Rights conference which was held Thursday evening, brought together academicians, experts and activists from around the world to Mashhad.

The participants discussed issues like protecting Human Rights in the fight against terrorism, double standards in the United States’ Human Rights practices and the West and its allies' support of terrorism, Iran Press reported.

"West's unconditional support, including logistical and media, has increased victims of terrorism in Iran," said Secretary General of the Habilian Foundation, a human rights group formed by the family members and relatives of the Iranian victims of terrorism.

Speaking at the conference, Mohammad Javad Hasheminejad added, "At least 17,000 people in Iran have been killed to this date by the terrorist organizations including People's Mujahedin of Iran (MKO) terror group."

The international Human Rights conference was held in Mashhad a day after a deadly terrorist attack in Iran’s southeastern province of Sistan-Balouchestan.

A suicide car bomber claimed by the so-called Jaish ul-Adl terrorist group, attacked a bus carrying members of the Islamic Revolution Guards Corps personnel on Wednesday, killing at least 27 people and wounding 13 others.