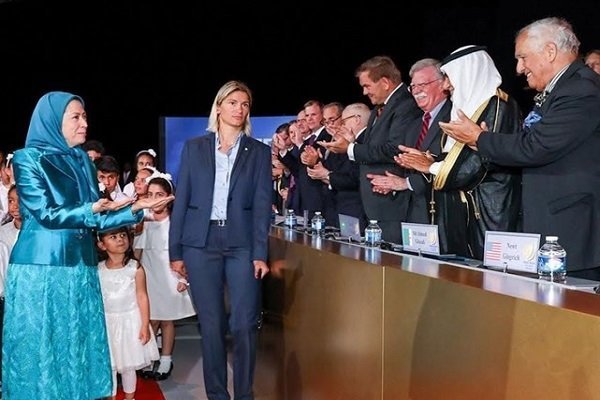 Israeli regime is providing extreme right parties in Europe with covert support to create a rift in the continent.

It’s years that extremist rightwing parties in Europe have found significant political power to the point that they have entered the parliaments of most European countries or either play a crucial role in making political decisions.

Today, Europe's dominant extremist rightwing trends have moved a bit away from their origin, i.e. traditional fascism, and reject racism selectively as a result of an ideological transformation (denial of anti-Semitism and spreading Islamophobia). This is a factor which brings Zionist leaders closer to these parties.

But which sources finance these emerging parties?

A report published some days ago in an Italian newspaper which in part answers this question. The European newspaper wrote in its report: the Vox, the extreme right wing of Spain, has been funded by the MKO (the terrorist group of Mojahedin-e Khalq). The party received € 800,000 in their 2014 campaign from MKO; a group which was enlisted as a terrorist organization in the United States till 2012.

According to this report, it is necessary now to study the sources which fund MKO.

The Guardian recently issued in a detailed report addressing the history of this terrorist group, and describe it as a tool in the hands of the United States against Iran. The report also says that Saudis are probably the source of this group's financing.

In this Op-Ed penned by Arron Merat, the members of MKO (before the Islamic Revolution) backed the revolution in Iran and then fought for Saddam. The United States and Britain used to condemn them for a time, but in the current situation, a group is a good option for the extremist policies of the Trump administration. John Bolton, the national security adviser to Trump and Mike Pompeo, the US Secretary of State, are among those who pursue such a policy.

Under the leadership of Maryam Rajavi, the Guardian writes, the MKO has won considerable support from sections of the US and European right, eager for allies in the fight against Tehran.

Ervand Abrahamian, a professor at the City University of New York and a historian of Middle Eastern and particularly Iranian history, says “the money definitely comes from Saudis. There is no one else who could be subsidising them with this level of finance.”

MKO’s relationship with the Israeli regime

According to the Guardian, between 2007 and 2012, a number of Iranian nuclear scientists were attacked. In 2012, NBC news, citing two unnamed US officials, reported that the attacks were planned by Israel’s foreign intelligence agency and executed by MKO agents inside Iran.

According to the western media, it seems that the financial support in recent years has largely come from Saudi Arabia and Israel (especially Saudi Arabia).
We have witnessed that Saudis have had a strong presence the meetings held by the hypocrites and their high-ranking figures have delivered several speeches supporting such groups and movements.

The Haaretz Newspaper reports Danny Yatom, the former head of the Mossad, that Israel can implement some of its anti-Iran plans through the MKO (Mojahedin-e Khalq Organization). Israel should consider all possibilities, including military conflict with Iran, but it should not exclude the capacity of intermediaries such as the MKO who have collaborated with Tel Aviv in assassinating Iranian nuclear scientists. Israel is training and providing this group.

The former head of the Mossad added that the organization is apparently linked to Saudi Arabia and can be used in two ways by the Jewish nation and Riyadh.
They worked as a source of information regarding Iran's nuclear program. Israel can indirectly use the organization on social networks to influence the Iranian people.
Former Mossad head Meir Dagan, in an interview with CBS, revealed that Israel is helping the MKO and armed terrorist groups whose mission is to overthrow the Islamic Republic of Iran.

Saudi Arabia behind rapprochement between Israel and MEK

Saudi Arabia has for a long time been the main sponsor of MEK as it has been shown by the attendance of the influential figures of Saudi royal family in the meetings of the terrorist group in the European countries.

In recent years, the progress of Saudi Arabia's relations with the Zionist regime and their common hostility towards Iran has become a factor for the Zionists to approach the MEK.

In the meantime, the Zionists deliver missions to the group in exchange for their financial and political support. The Rajavi group keeps an eye on Iran and spies on the country on behalf of the Israelis. Another mission that has been delivered to a group is infiltrating into the far right parties in Europe to secure their support.

Of course, the Zionists themselves have had their own separate relations with European far-right parties and are trying to advance their goals through the channel of the MEK. In this vein, the decline of anti-Semitism feeling among the far-right parties was also a change that resulted from Israel's approach to these parties.

With regard to Israel's rapprochement to the European far-right parties, "Orient XXI" (Socialist Revolution in Arabia) website wrote “it all began on 19 December 2010, when a sizeable delegation arrived in Tel Aviv, consisting of some 30 leaders of the European Alliance for Freedom. As its name fails to indicate, this was an organization comprised of a series of parties belonging to the radical right.

Orient XXI added, “it was the first time since the creation of Israel that the country had played host to such a sinister gathering, which included Geert Wilders of the Netherlands, Philip Dewinter from Belgium and Jorg Haider's successor, Heinz-Christian Strache, from Austria.”

What were these neo-Fascists, who often denied the Holocaust and even worrying about the loss of the Third Reich, doing in Israel?

They [neo-Fascists] participated in a Conference organized by the right wing of Likud Party which was dedicated to fight against terrorism.

Despite the unofficial specification of this move, the then Israeli Foreign Minister Avigdor Lieberman had long negotiated with Wilders, known for his criticism of Islam, and he also compensated his blessing with the official visit of the settlements constructed on the West Bank of Jordan River.

According to the Air France Press (AFP), a man who had the dream of banning the Holy Quran in the Netherlands, “spoke against returning the occupied lands through making peace with Palestinians and raised the proposal of the voluntary settlement of Palestinians in Jordan” and then defended the settlements on West coast of Jordan River.

Everything is crystal clear that Israeli right- and right-extremism parties are ready in their “crusade” against the Palestinians to establish unity and amity even in the most unusual ones.

What is the reason for Israel to get closer to European extremist right-wing?

The obvious features of the emerging extremist parties in Europe are their opposition to traditional practices in European countries. For example, these parties weaken the convergence in Europe and undermined the position of the European Union in the international system.

Since the traditional European parties have a special look at democratic and human rights issues, they have always been critical of the Zionist regime's actions against the Palestinians, and the European Union’s criticisms and condemnations of this regime has intensified in recent years. The Zionist regime is struggling to bring a deep divide between emerging and traditional parties through getting closer to the extremist right-wing parties in Europe, perhaps to reduce Brussels's pressure on Tel Aviv.

Reducing Europe's pressure on the Zionist regime means releasing Israel from a major dilemma. In other words, divisions among European countries and their challenge with emerging parties can be a factor in the advancement of the goals of the Zionist regime at a macro level. Therefore, given the financial support of the MKO for the European extremist right-wing and the link between the Cult of Rajavi with Saudi and Israeli channels, it (Cult) has become a factor used by Zionism to create a rift in Europe.