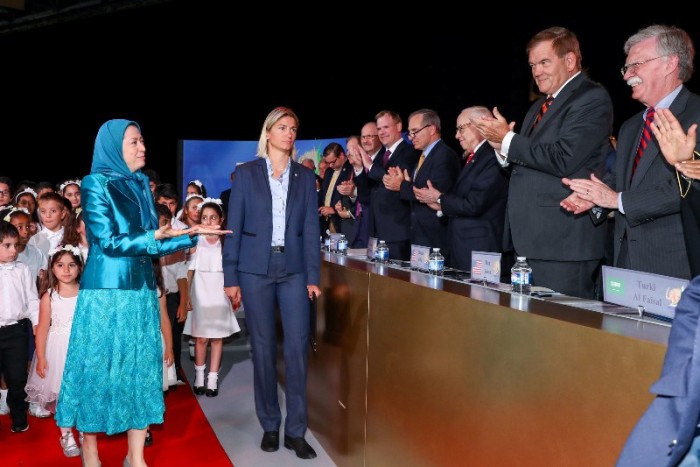 To help make sense of the current round of saber rattling by the Trump administration against Iran, James Carden of the Nation has spoke with Dr. Trita Parsi, author of “Losing an Enemy: Obama, Iran, and the Triumph of Diplomacy” about the role that the Mek would play in the Trump administration’s new policy of regime collapse, instead of regime change, towards Iranian government:

JC: Picking up on the theme of regime collapse. Such a policy—as opposed to regime change—would seem to imply that Trump would prefer not to effectuate a change in Tehran through direct military action but rather to try and destabilize the country from within. If so, it would seem that anti-regime elements such as the terror-cult MeK would have a role to play. You’ve written about MeK, notably in an essay in The New York Review of Books. For readers unfamiliar with them, could you explain, broadly, who they are and how they came to acquire such a powerful US domestic lobby?

TP: Yes, my assessment is that Trump prefers to achieve his objectives without taking military action because of the cost. Note, not because of any particular humanitarian concerns. And that will drive him towards regime collapse instead of war or regime change, because regime change too is costly.

Whereas the MeK is of little use if the objective is regime change, due to their immense unpopularity in Iran, the Trump administration seems to believe that they can be helpful for regime collapse and a potential Civil War, mindful of this terrorist organization’s extensive experience in sabotage, terrorism, assassinations, and even regular warfare.

The MeK is a violent terrorist cult that first started killing Americans and officials of the Shah’s regime back in the 1960s and ’70s. They were in support of the Islamic revolution but had a fallout with Ayatollah Khomeini and ended up seeking refuge with Saddam Hussein during the Iraq-Iran War. They ended up siding with Iraq during the war, which cost them almost all of their support inside of Iran.

Once the war ended, Saddam started using them as his personal ethnic-cleansing army against Shia in the south of Iraq and Kurds in the north.

While fighting for Saddam, the MeK began establishing a very strong lobbying presence on Capitol Hill by giving extensive campaign funds to Democratic and Republican members of Congress alike. Flush with financing from Saudi Arabia, they of course pushed an open door because their meagre was that the regime in Iran is bad and needs to be overthrown. Despite betting on the US terrorist list, they were still free to engage in this extensive lobbying effort which culminated in them lobbying to get off the terror lost in 2012.