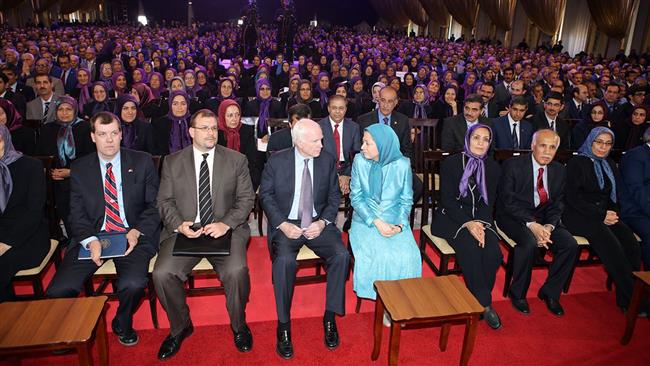 With the rise of ISIL activities in Syria and Iraq during the mid-2010s, the simplistic story about "the worst terrorist organization ever" emerged in the mainstream media. However, how accurate is that? Taking into consideration today's active organizations, their crimes and massacres, number of victims and the operational coverage, we can freely say that ISIL is far from being the worst terrorist group in history. It's not highly popular Al-Qaeda either, notorious Boko Haram in Africa, or any similar group which received widespread media coverage in the recent years. In accordance with the above mentioned parameters, the infamous "winner" in this category is unquestionably Mujahedin-e Khalq (MEK or MKO). Led by Masoud and Maryam Rajavi (husband and wife), it is known by several other different names and acronyms, including People's Mojahedin of Iran (PMOI), National Liberation Army of Iran (NLA), and National Council of Resistance of Iran (NCRI). This organization was founded in the 1960s by a group of Iranian leftists opposed to the country's pro-Western ruler, Shah Mohammad Reza Pahlavi, and later developed into the largest and most militant group opposed to the Islamic Republic of Iran. After the 1979 Islamic Revolution in Iran, the group was driven from its bases on the Iran-Iraq border and resettled in Paris, where it began supporting Iraq in its eight-year war against Khomeini's Iran. In 1986, MEK moved its headquarters to Iraq where it received its primary support to attack the targets in Iran. The organization is designated as a terrorist organization by Iran and Iraq, and was officially considered a terrorist organization by the United Kingdom, the European Union, the United States and Canada until 2008–2012 period, when the MEK's long-term lobbying efforts finally gave results. In 2016, the MEK headquarters have been relocated from former US military base Camp Liberty in Iraq to Albania.

According to the latest estimates, around 14,000 Iraqi and Syrian civilians have been killed by the ISIL terrorist attacks, followed by several thousand people killed by Al-Qaeda and Boko Haram. Precise figures are difficult to determine because all the groups are involved in armed conflicts, and its not easy to distinguish a victim of war crime and a victim of terrorism. Nevertheless, based on the facts and figures, due to the terrorist attacks committed by the Mujahedin-e Khalq more than 16,000 people have been killed in Iran alone, not counting their atrocities against Iranian and Iraqi civilians during the Iran-Iraq war and the 1991 uprisings in Iraq. Their tactics included bomb attacks, targeted assassinations, aircraft hijackings, and so on. Only from 26 August 1981 to December 1982, the MEK conducted 336 terrorist attacks against targets in Iran. The organization initially tried to make their own social and political space inside Iran, and because it failed to bring any success in this work, they changed the orientation to the terrorist acts against Iran's head of state. The explosion at the headquarters of the Islamic Republic Party and death of Ayatollah Mohammad Beheshti, the head of the Supreme Court with 72 members of the party, including 14 ministers and 27 MPs, the killing of President Mohammad Ali Rajai and Prime Minister Mohammad Javad Bahonar, are some parts of the terrorist activities of the organization.

Mujahedin-e Khalq has also conducted attacks against numerous Western targets, both in Europe, North America and elsewhere. In the early 1970s, MEK members killed several US soldiers and civilians working on defense projects in Tehran. Such victims included US Army Lt. Col. Lewis L. Hawkins who was assassinated in June 1973, US Army officers Col. Paul Shaffer and Lt. Col. Jack Turner killed in May 1975, an Iranian employee at the US Embassy in Tehran two months later, and US civilian contractors Robert R. Krongrad, William C. Cottrell Jr. and Donald G. Smith assassinated by four gunmen in August 1976. Furthermore, in May 1972 US Air Force General Harold L. Price was seriously wounded in attempted assassination. Several hours later, the MEK had a plan to assassinate US President Richard Nixon and they blasted a bomb at mausoleum where Nixon was scheduled to attend a ceremony just 45 minutes after the explosion. In November 1970, a failed attempt was made to kidnap the US Ambassador to Iran, Douglas MacArthur II. MEK gunmen ambushed MacArthur's limousine while he and his wife were en route their house. Shots were fired at the vehicle and a hatchet was hurled through the rear window, however, MacArthur remained unharmed. During the same period, MEK operatives also committed bombing of facilities of Pan-Am Airlines, Pan-American Oil, Shell Oil, and of gates of British Embassy.

The MEK has used a car bomb in July 1987 plot against an Iranian diplomat who survived terrorist attack in Madrid, as well as an injured bystander. In April 1992, they invaded Iranian diplomatic missions in thirteen Northern American and Western European countries, seizing hostages and wrecking offices in a wave of coordinated attacks. In New York, five men armed with knives invaded the Iranian Mission to the United Nations, took three hostages, smashed furniture and computers in a two-hour rampage behind chained doors. Two of the hostages escaped when the police broke through a back door, and the third was released unharmed when the intruders surrendered to police negotiators. In Ottawa, Iran's Embassy was attacked and pillaged by about 35 people armed with sticks and hammers. And in Europe, the MEK members stormed Iranian embassies and consulates in Bonn, Hamburg, The Hague, Oslo, Stockholm, Copenhagen, Bern, Paris and London. Scores of demonstrators were arrested, and many of the Iranian missions were extensively damaged, some by firebombs. There were many injuries in clashes that erupted, but luckily no deaths.

In Germany, several police officers were hurt as the authorities struggled to arrest about 50 members who occupied the seven-story Iranian Embassy in Bonn for two hours. The angry mob hurled official papers and furniture from the windows during the rampage. The Iranian Consulate in Hamburg also was besieged with demonstrators hurling rocks and firebombs. About 20 protesters were arrested, and four people were treated for smoke inhalation and shock. They also broke into Iran's Embassy in The Hague after a car rammed through the compound's gate. Protesters armed with metal bars and sticks rushed through, entered the building and caused extensive damage. In Stockholm, 50 MEK members set two Iranian Embassy buildings and six cars on fire. The Ambassador's wife and two children were treated for shock, and one embassy employee suffered burns. One embassy employee was injured as invaders ransacked the Iranian Embassy in Oslo, and several others in the embassy in Copenhagen where MEK members smashed windows. They also hurled rocks, smashed windows and tore down the Iranian flag at the embassy in London, and a firebomb was later thrown at the London offices of Iran Air, causing damage but no injuries. Later in the 1990s, Iranian diplomats were also attacked in Denmark, Austria, and Italy. Western diplomats were also targeted; in August 2003 MEK bombed the United Nations compound in Iraq, prompting UN withdrawal from the country.

Participation in the genocide

Following the Iraqi invasion of Iran in 1980, the Mujahedin-e Khalq described Saddam Hussein an aggressor and a dictator, but after he offered them an alliance the MEK transferred its headquarters to Iraq and sided with Saddam against the Iranian Armed Forces in the Iran–Iraq War. Their decision was viewed as treason by the vast majority of Iranians and it destroyed the MEK's appeal in its homeland. The organization gained a new life in exile, started calling itself the National Council of Resistance of Iran (NCRI) and continued to conduct violent attacks in Iran. Near the end of war, a military force of 7,000 members of the MEK, armed and equipped by Saddam's Iraq, went into action. During the war and later in the 1991 uprisings in Iraq, the Mujahedin-e Khalq assisted Iraqi Ba'athist government in a series of systematic attacks against the Kurdish fighters (Iran's allies) in northern Iraq. The result of their action was a genocide that killed between around 100,000 Kurdish civilians. Former Mujahedin members remember Maryam Rajavi's infamous command at the time: "Take the Kurds under your tanks, and save your bullets for the Iranian Revolutionary Guards." Regardless of their share in a committed genocide, it is higher than all the Daesh's massacres committed against Yazidis, Christians, and Shias combined.