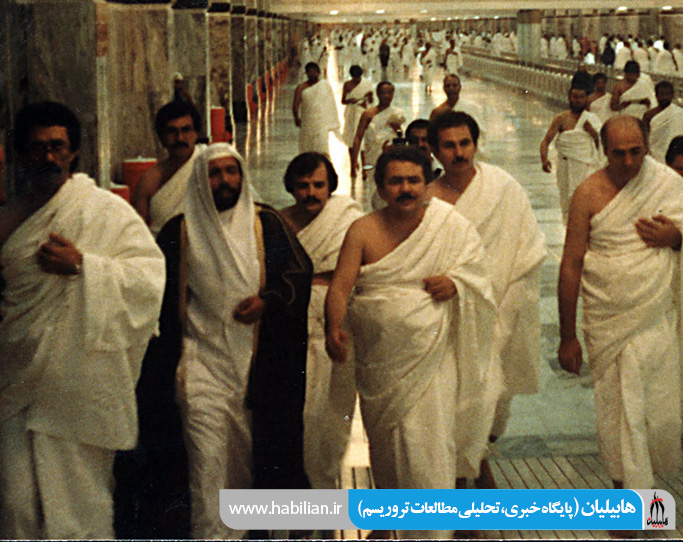 On July 31, 1987, 6th of Dhu Al-Hijjah, 1407 (lunar year), the “Disavowal of Infidels” (al-bara'a min al-mushrikin) ceremony, rallies held by pilgrims in Mecca to denounce Israel and the United States, was harshly suppressed by Saudi Government, an action which led to the killing of many of Iranian pilgrims. Now there is evidence that proves the role of Mojahedhin-e Khalq (MeK) Organization and their cooperation with the Iraqi Ba'athist regime and Saudi Arabia in massacre of Iranian j pilgrims.

It should be noted that this tragedy is occurred when Iran was involved in the war with Iraqi invaders, so Ba'athist Regime's involvement in this event seems likely.  In such a situation, immediately after Iranian pilgrims’ massacre in Mecca, the MeK in a proclamation accused Iran of being responsible for the massacre and exonerate the Salafi, Ba’athist, Wahhabi and Saudi criminals.

Referring to the issuance this proclamation and Saudis know of it Mahdi Abrishamchi, a member of the MeK, said in an interview with Iraqi Intelligence Officers:

“when King Fahd’s official invitation was sent to us, we thought that is regarding our proclamation, but when we went, they delivered this invitation. So we found it necessary to directly express this issue in order to coordinate with you and consider your points of view. Following the announcement that we issued after Mecca incident, a copy of which was sent to the Embassy of Saudi Arabia in Baghdad, Mr. Ambassador called me and said that he was a messenger from king Fahd and came to visit me that day. Announcing King Fahd’s considerations, the ambassador invited a delegation from the organization to travel to Jeddah and meet with Saudi authorities on Saturday.” According to the confession of a former agent of the MeK named Rezvani, “using the opportunity made during the Haj Time and based on a pre-planned program, Masoud Rajavi massacred the calm demonstration of Iranian pilgrims with the cooperation of Iraq to achieve his special goals.”

Of course, before the MeK members’ disclosures, Iranian authorities had been informed about the group’s role in the July 31 massacre. For example, during his August 1987 lecture, Ayatollah Khamenei, the then Iranian President, pointed to the MeK’s role in incidents of the bloody Friday in Mecca and said:

“We strongly guess that the Monafeghin (“Hypocrites” in Persian, a label which Iranian people use for the MeK) and the humble mercenaries who are ready to commit any crime against their own country, have had a role in this brutal crime. There are evidences that a number of persons with Persian language who had covered their faces, gave a hand to global arrogance and the Saudi Regime in this crime. This incident was pre-planned….”

Also Ezzatollah Sahabi, a late Iranian MP and a member of the Freedom movement of Iran, later writes in his diary book about the MeK’s “mischiefs” in the event, which is called “Bloody Friday” by Iranians:

“unfortunately, due to some mysterious interferences the demonstration in that year was suppressed and a large number of our compatriots were killed. During my travel abroad that year, one of my friends informed me that the incident was happened or led to violence due to the mischiefs committed by the Mojahedin. I was hoping this news was not correct… but the reports suggested that one of the members of the Mojahedin, Called Mr. Abbas…, who had worn Ihram Clothing, appeared among the demonstrators and when the throng reached the bridge called “Hojum”, shot a policeman.  Being fully mobilized, Saudi Police attacked toward the throng and fire them. The throng rushed back frantically and a large number of them, mostly compromised of women, were crushed and killed under feet.”

The evidence available today suggests that the Iraqi regime, which at that time was at war with Iran, was also aware of the conspiracy planned by the MeK and the Saudis and coordinated with them in order to massacre the Hajj rituals. In a part of disclosed negotiations between Iraqi Security officers and an oldline agent from the center ring of the Mek named Abbas Davari, who undertook the MeK’s expeditionary team to the Hajj of 1987, the issue of MeK’s presence in Hajj and Ba’athists’ cooperation with them:

Abbas Davari: We want, in case of permission, to have presence in the Iraqi Hajj Caravan in such a way that it does not come out that we are from the Mojahedin and non-Iraqi, and [also want] to arrive in the same day that Iranians enter; Because, as you know, Iranians goes to Hajj with Caravans. We want to penetrate our forces in them to make connections.

Iraqi security officer: How could we take visa for you? Where do your forces want to make connection?

Abbas Davari: In Jeddah, to where all the pilgrims are deplaned and currently we have in mind some persons who are not in Iraq [by now].
Iraqi security officer: After the agreement, we could take for them Iraqi passports and send them by some of Hajj Caravans. The passports will be sent for each person individually and they will be received in due time. There is no other way.

Abbas Davari: Due to the Current situation, it will be better if they could go to another country and from there, they come back to Iraq.
Iraqi security officer: Since the passports will be transmitted by one of our Caravans, they cannot return with another Caravan. Since Saudi Arabia has a list from each caravan, your agents can separate from the Expedition and go to their work. No one will recognize them and at the end they refer to a person determined by us and take their passport and return.

Abbas Davari: The Mojahedin forces want to infiltrate in the Iranian Caravan and be with them night and day in such a way that it does not come out that they are from another Caravan.

Masoud Rajavi’s confidential travel to Saudi Arabia
In Murch 2001, about 13 years after the horrible incident of Mecca, a photo of Masoud Rajavi was published in the Journal of Mojahed,the MeK’s main Press organ during early years of 1980’s, which indicated that he was present in Mecca in 1987. In this photo, besides of Rajavi, there are other persons such as Abbas Davarii, Alireza Babakhani, Mohammad Seyyed-ol Mohaddesin, Alireza Sadr Haj Seyed Javadi, and Reza Darroodi, all of them are the MeK’s officials in charge of foreign affairs, intelligence and security.

Besides, there were other evidences indicating the MeK leader’s confidential travel to Saudi Arabia in 1986 by the official invitation from King Fahd simultaneously with the incidents of Mecca.

In this regard, Mahdi Abrishamchi tells the Iraqi Intelligence officer:
“To secure the secrecy of the travel even for the employees of airport, we have a scheduled table to act accordingly which give and expect you to act based on it and nobody knows it but the three of us.”

In another meeting between the MeK and Iraq’s Intelligence Organization, it is emphasized that the mentioned travel is meant to attract more Saudi support for the group in order to confront the IRI.

Disclosing the MeK’s relation with Saudi Arabia by Masoud Rajavi

In a negotiation with Lieutenant General Saber al-Douri, the then director of Iraq’s General Military Intelligence, which was held during the 1991 uprisings in Iraq, Masoud Rajavi said:

“On Thursday last week, our agent met with “Murphy” in the U.S. They listened us and we tried to disclose the plans and conspiracy of Khomeini’s regime for them. We proved them that this is the Iranian Regime which is number one threat, not Iraq. We clearly tell them that this threat and danger will be directed toward Saudi Arabia. You Iraqis provided our communication with Saudi Arabia, in such a way that King Fahd invited me to visit the kingdom. I went there and met with him.”
In a message to “the Head of Iraqi Intelligence Organization” he also speaks about the MeK’s relation with Saudi Arabia:
“As Mr. Doctor knows, we try to conceive Saudi Arabia to establish a strong relation with Iraq and to exclude the Khomeini’s regime most severely and Mr. Doctor is well aware that any information about this meeting should remain secret. Also, if Mr. doctor has any consideration, please states it before the delegation (dispatched to Saudi Arabia) goes back on Tuesday.”