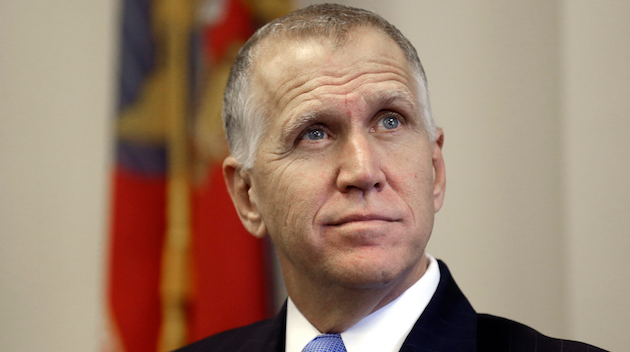 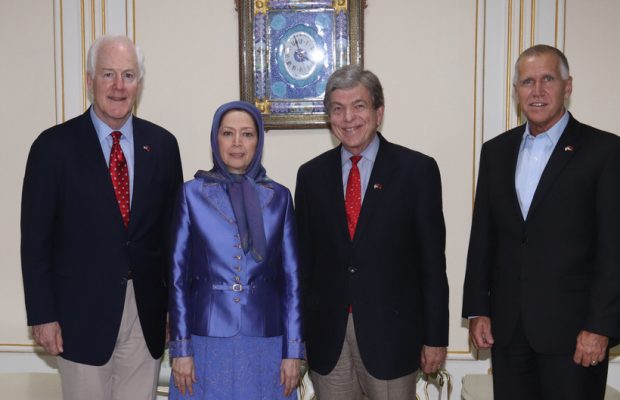 Travel to Albania and meet with Rajavi
On August 12, 2017 Tillis travelled to Tirana, the capital of Albania to meet Maryam Rajavi, the head of the terrorist Mujahedin-e Khalq Organization. Tillis was accompanied in this trip with Senator Roy Blunt, Vice President of the Republican Conference, and member of the Appropriation, Select Intelligence, Rules and Administration, and Commerce, Science, and Transportation committees; and senator John Cornyn, the Majority Whip, and a member of the Judiciary, Select Intelligence, and Finance committees.
During the meeting, Rajavi expressed her gratitude for the tireless efforts of the U.S. Senate, particularly Senator Blunt, regarding the protection of thousands of MKO members in Iraq, and their safe relocation to Albania.
During the meeting with the American lawmakers, Rajavi welcomed Washington’s hostile approach toward Iran, especially the imposition of new sanctions and called for "regime change" in the Islamic Republic.
Tirana, Albania, August 12, 2017 – Maryam Rajavi (left), meeting a senior delegation from the United States Senate. The two sides discussed the situation of members of the Mujahedin-e Khalq in Albania and the recent developments in Iran and the Middle East.
Earlier in April, Senator McCain, a long supporter of the Iranian opposition and a staunch critic of Tehran’s policies, also visited the MKO in Albania and met with Rajavi. [18]
Saturday’s high-profile visit by the senior U.S. Senators comes at a time when Washington has slapped major new sanctions against Iran for its ballistic missile drive, support for terrorism and human rights violations.
The MKO is the most hated terrorist group among the Iranians because of its dark history of assassinations and bombings and for siding with the former Iraqi dictator Saddam Hussein in his eight-year war against Iran in the 1980s.
The MKO fled Iran in 1986 for Iraq and was given a camp by former Iraqi dictator Saddam Hussein. It fought on the side of Saddam in the Iraqi imposed war on Iran during which the former Iraqi dictator used chemical weapons against Iranian civilians and military on a massive scale. The notorious group is also responsible for killing more than 17,000 Iranians in different acts of terrorism, including bombings in public
Out of the nearly 17,000 Iranians killed in terrorist assaults since the victory of Iran’s 1979 Islamic Revolution, about 12,000 have fallen victim to MKO’s acts of terror.
However, the terror group once had a presence in the United States and maintains offices in Europe.
The MKO was listed as a terrorist organization by the U.S. and European Union in 1997 and 2002 respectively, but as more efforts got directed to vilify Iran, the MKO got delisted by the EU on January 26, 2009 and by the U.S. on September 28, 2012.
After Washington formally removed the MKO from its list of terror organizations, the group became able to have its assets under the U.S. jurisdiction unfrozen and do business with the American entities. A number of U.S. officials received hundreds of thousands of dollars in fees for speaking on MKO’s behalf ever since.
However, American officials are not the only ones receiving money from the MKO in exchange for political support. On July 9, 2016, former Saudi intelligence chief and former Saudi ambassador to Britain and the United States Prince Turki al-Faisal Al Saud spoke for 30 minutes before a crowd in Paris, France, for the annual conference of the MKO.