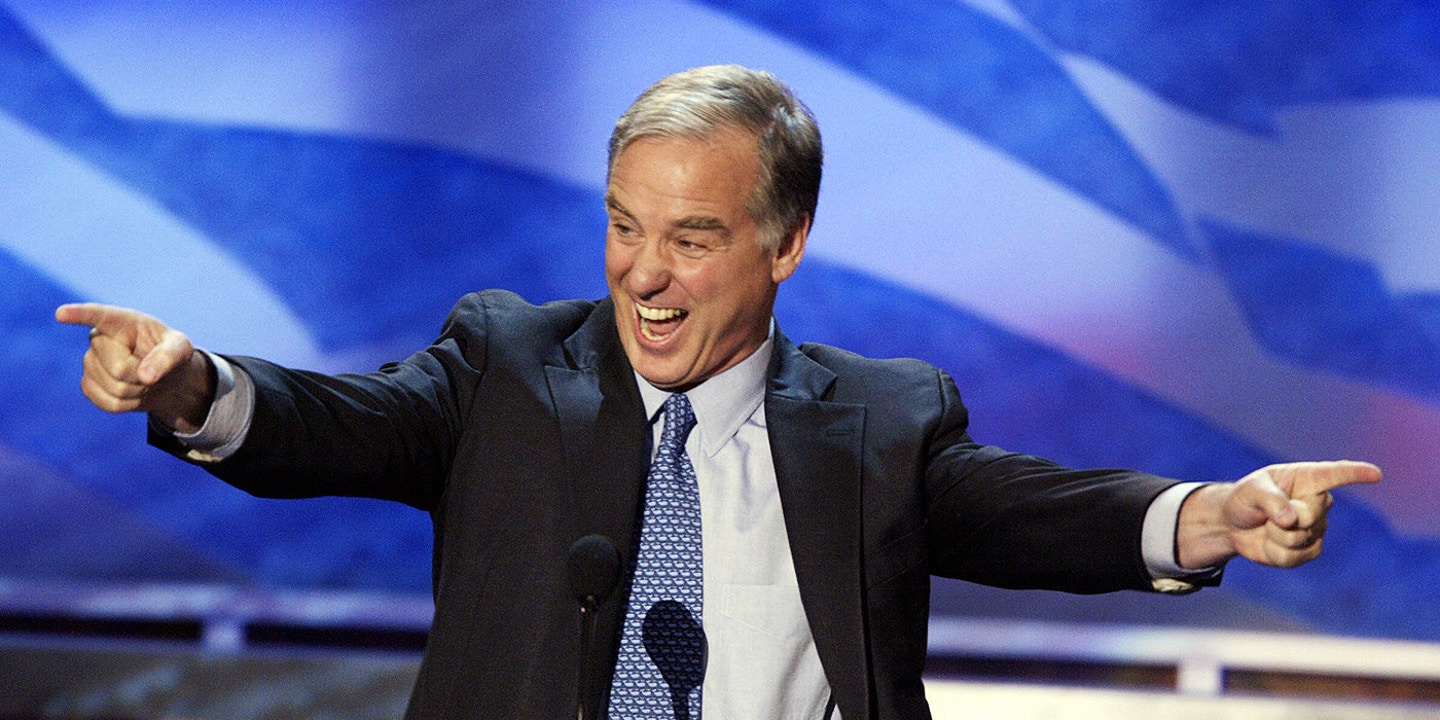 Habilian Associaton
Howard Brush Dean III, more commonly known as Howard Dean, was a six-term governor of Vermont and failed Democratic presidential nominee for the 2004 election, losing to John Kerry. He was also chair of the DNC from 2004-2009. [1]

2016 presidential election
In 2013, Dean expressed interest in running for the presidency in 2016, but published an op-ed in December 2014 in which he outlined why he would support former Secretary of State Hillary Clinton should she decide to run for president, which she eventually did in April 2015, resulting ultimately in winning the 2016 Democratic nomination. [ I'm Ready for Hillary, Politico, December 10, 2014.] Even though Bernie Sanders was a Senator from Vermont, Dean continued to support Clinton. Clinton eventually lost the presidential election to Republican nominee Donald Trump in November 2016. [2]

Healthcare industry lobbyist
Dean, though he rarely discloses the title during his media appearances, now serves as senior advisor to the law firm Dentons, where he works with the firm’s Public Policy and Regulation practice, a euphemism for Dentons’ lobbying team. Dean is not a lawyer, but neither is Newt Gingrich, who is among the growing list of former government officials and politicians that work in the Public Policy and Regulation practice of Dentons. [3]

The Dentons Public Policy and Regulation practice lobbies on behalf of a variety of corporate health care interests, including the Pharmaceutical Research and Manufacturers of America, a powerful trade group for drugmakers like Pfizer and Merck. [4]

***
Dean, first became famous as a progressive hero in 2004, before serving as the Democratic National Committee Chair from 2005 to 2009. What has he done since then? Why, turned lobbyist. [5]

His business is lobbying
Since joining the lobbying industry, Dean has oddly argued on multiple occasions that he does “not lobby.” But he engages in virtually every lobbying activity imaginable, helping corporate interests reach out to lawmakers on legislation, advising them on political strategy, and using his credibility as a former liberal lion to build public support on behalf of his lobby firm clients.

In his new career, he has helped drug companies maintain monopoly power, reversed his old positions on Medicare prices, and worked to undermine a critical component of the Affordable Care Act. Though known for his anti-war rhetoric in 2004, Dean has accepted money from Mojahedin-e Khalq, an extremist group seeking regime change in Iran and has criticized President Obama’s negotiations with Iran.

The fact that Dean is not a registered lobbyist reflects a distinction that is largely meaningless in today’s Washington. Thousands of other professionals in the lobbying business have either never registered or de-registered and lobby registration law has almost never been enforced. Newt Gingrich, who was widely criticized in 2011 for acting as a lobbyist for various clients without registering, was hired last year by Dentons’ lobbying practice, where he works closely with Dean to consult with clients on political strategy. As Legal Times reported, the Dean-Gingrich team is now a selling point for Dentons as the “pair aims to become another Washington-based bipartisan tag team who can act as political soothsayers for whichever corporate clients call upon them.” [6]

The Terrorist’s Man
Dean is a paid shill for the Mojahedin-e Khalq (MEK), the Iranian exile group that calls for an overthrow of the Iranian regime. This organization has worked closely with hawks in recent years to build support for their shared goal. And a new policy of rapprochement with Iran, however modest, is not good for MEK. [7]

The Mojahedin-e Khalq has paid Dean to help in its campaign to be delisted as a U.S.-recognized terrorist group. In 2011, the Wall Street Journal reported that Dean was receiving speaking fees from the group. Around that time, Dean began vociferously arguing on behalf of the MEK, even though he conceded that he had known little about the group before joining its cause. [8]

That year, Dean traveled along with other paid MEK supporters, including Rudy Giuliani, to appear in Berlin with the group and demand that Western nations recognize the MEK leader Maryam Rajavi as the president of Iran. In addition to carrying out a campaign of terrorism against Iran, the MEK helped Saddam Hussein after the Gulf War crush rebellions in Iraq’s Shiite and Kurdish communities. “Take the Kurds under your tanks, and save your bullets for the Iranian Revolutionary Guards,” Rajavi once said. [9]

Dean, along with the likes of John Bolton, Rudy Giuliani, Ed Rendell and other notables, has given paid speeches at MEK rallies. In the first term of the Obama administration, MEK's allies launched an expensive P.R. effort to get the State Department to de-list MEK as a Foreign Terrorist Organization. (Anyone who lived in the D.C. metropolitan area between 2010 and 2012 will be familiar with a seemingly endless cycle of television ads calling for this.) The effort was successful: in September 2012, just before the election, the State Department de-listed MEK. It was a heavy, cynical lobbying effort that offered a real education in the how subjectively the government applies the term "terrorism" to suit its interests.[10]

Dean has never been a strong supporter of negotiations with Iran. The day after President Obama called for continuing negotiations with Iran in his 2014 State of the Union address, Dean said, "We need to stand up to the mullahs. These are not people we ought to be negotiating with." He made these comments at a "policy briefing... hosted by the Iranian-American Community of Arkansas, a member of the Organization of Iranian-American Communities, an MEK advocacy group." Dean added that any deal made with Iran on its nuclear program needs to include all sorts of stipulations regarding human rights, including the protection of 3,000 MEK exiles stationed at an American camp in Iraq. [11]

He repeatedly dodged a Buzzfeed reporter's question about whether he was paid for that particular speech. [12]

In May 2011, Dean co-wrote an op-ed with another MEK shill, Rudy Giuliani, warning against negotiations on the grounds of Iran's human rights record -- specifically its record towards the MEK, which, again, has given Dean and Giuliani lots of money. Calling on the administration to bail on Iranian nuclear negotiations because they don't address Iran's human rights abuses or regional aggressions is a common tactic for people who don't want the United States to reach a diplomatic agreement over Iran's nuclear program. Dean takes the same approach as Benjamin Netanyahu: suggesting that there is a "better deal" out there in which Iran eliminates every last trace of its nuclear infrastructure, reforms itself into the world's number one protector of human rights, and abandons all of its regional interests. Perhaps, if John Kerry had the courage to twist a few more arms, he could even get Ayatollah Khameini and his regime to self-abdicate and put in place an American puppet government. How about... the MEK? [13]

It is designated as a terrorist organization by Iran and Iraq, and was considered a terrorist organization by the United Kingdom and the European Union until 2008 and 2009 respectively, and by Canada and the United States until 2012. Various scholarly works, media outlets, and the governments of the United States and France have described it as a cult. The organization has built a cult of personality around its leaders Massoud and Maryam Rajavi. ... In 2002 the MEK revealed the existence of Iran’s nuclear program. They have since made various claims about the programme, not all of which have been accurate. [14]

Human Rights Watch documented prison camps run by the MEK. This was in 2005:
Human Rights Watch interviewed five of these former MKO members who were held in Abu Ghraib prison. Their testimonies, together with testimonies collected from seven other former MKO members, paint a grim picture of how the organization treated its members, particularly those who held dissenting opinions or expressed an intent to leave the organization. [15]

Within the District, MEK is famous for its aggressive lobbying efforts. They spent with wild abandon to get their names stricken from the terrorist list. Nobody’s sure how much. Who received those funds? Among others, Howard Dean. Dean is a Democrat, and the MEK are equal-opportunity spenders.

The claim that the Iranian Revolutionary Guard Corps is a wholly terrorist organization, that they are a unique threat, is so laughable that only Dean and the National Review could believe it. The IRGC are pretty much the same as any military-industrial state complex: they play political games and try to expand their own power. Iran funds various militant groups and militias, but they’re far from the dominant state funder of terrorism. That would be us, and our good friends, Saudi Arabia.

The Global Terrorism Database at the University of Maryland has recorded terrorist incidents since 1970 onwards. A significant majority of deaths—over 94% of them—are the work of the Islamic State’s Sunni jihadists and al-Qaeda.

Of course, factual documentation of Iran is hardly the point. Since the Seventies, the American national security apparatus has wanted to fight Iran. Labeling the IRGC a terrorist group is one step closer to war with Tehran, since the IRGC is almost as powerful as the clergy. Once you have labeled the government as a hive of terror, it is easy to paint the entire population as murderers-in-waiting, and if you have done that, there is little to prevent the rain of missiles. Now, did Dean buy into the Iranian menace because he was paid to, or because he actually believes Tehran is gunning for Vermont? Does it matter?